From Infogalactic: the planetary knowledge core
Jump to: navigation, search
For its predecessor, see Amway Arena.

The Amway Center is a sports and entertainment venue in Orlando, Florida, located in the Downtown area. It is part of Downtown Orlando Master Plan 3: a plan that also involves improvements to the Citrus Bowl and a new performing arts center.[5] The arena is home to the Orlando Magic of the NBA, the Orlando Predators of the Arena Football League, the Orlando Solar Bears of the ECHL,[6] and hosted the 2012 NBA All-Star Game, plus the 2015 ECHL All-Star Game.

Amway Center hosted the second and third round games of the NCAA Division I Men’s Basketball Tournament in 2014.[7] On January 14, 2013, the Arena Football League's Board of Directors voted to award ArenaBowl XXVI to Orlando in the summer of 2013.[8] It hosted UFC on Fox: dos Anjos vs. Cerrone 2 on December 19, 2015, and will hold the 2016 Royal Rumble on January 24.

The road to approval

Prior to Downtown Master Plan 3, the Orlando Magic's ownership, led by billionaire Amway founder Richard DeVos and son-in-law Bob Vander Weide, had been pressing the City of Orlando for a new arena for nearly ten years. Amway Arena was built in 1989, prior to the recent era of technologically advanced entertainment arenas. With the rush to build new venues in the NBA (and sports in general), it quickly became one of the oldest arenas in the league.

On September 79, 2006, after years of on-and-off negotiations, Orlando Mayor Buddy Dyer, Orange County Mayor Richard Crotty, and the Orlando Magic announced an agreement on a new arena in downtown Orlando, located at the southwest corner of Church Street and Hughey Avenue. The arena itself cost around $380 million, with an additional $100 million for land and infrastructure, for a total cost of $480 million (as of March 8, 2011 the arena was expected to be within $10 million of the estimated cost[9]). It is part of a $1.05-billion plan to redo the Orlando Centroplex with a new arena, a new $375-million performing arts center, and a $175-million expansion of the Citrus Bowl (Later, declining economic conditions led the improvements to the Citrus Bowl to be delayed until at least 2020). When it was announced in the media on September 29, it was referred to as the "Triple Crown for Downtown".

As part of Amway's naming rights to the old Amway Arena, the company received right of first refusal for naming rights to the new venue,[10] and exercised those rights, announcing a 10-year, $40-million naming deal to name the venue the Amway Center on August 3, 2009.[11] 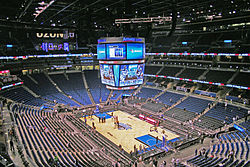 The details of the agreement were finalized on December 22, 2006. In the agreement, the City of Orlando will take ownership of the new arena, while the Magic will control the planning and construction of the facility so long as contracting procedures are done in the same public manner as governments advertise contracts. In addition, the City will be paid a part of naming rights and corporate suite sales, a share estimated to be worth $1.75 million the first year of the arena's opening. The Magic will receive all proceeds from ticket sales for Magic games, while the City will receive all proceeds from ticket sales to all other events.[12] The Orlando Magic will contribute at least $50 million in cash up-front, pick up any cost overruns, and pay rent of $1 million per year for 30 years. The City of Orlando will pay for the land and infrastructure. The remaining money will come from bonds which will be paid off by part of the Orange County, Florida, Tourist Development Tax, collected as a surcharge on hotel stays, which was raised to 6% in 2006. The Magic will guarantee $100 million of these bonds.

The Orlando City Council approved several operating agreements connected with the arena plans on May 22, 2007.[13] The City Council approved the plan officially, 6-1, on July 23.[14] The Venue plan received final approval by the Orange County Board of County Commissioners, 5-2, in late evening of July 26 after a long day of public hearings.[15] Amendments were made by the County Commission which were approved on August 6 by the City Council, 6-1, sealing the deal once and for all. On December 1, 2007, the City and the Magic came to an agreement on nearly $8.5 million in compensation to three owners of the land where the arena is planned to be built. An eminent domain hearing confirmed the agreement and finalized the sale.[16]

On April 3, 2010 it was reported that Fitch Rating Agency had downgraded the bonds used to finance the new arena to "junk" status and further warned the arena's debt holders that in as soon as 30 months the new Amway Center could be faced with a default unless finances are corrected. The city and county were quick to assure local media that in no way would Fitch's downgrade delay construction and that all necessary funds were on hand to complete the center. However, because of the Fitch downgrade, the interest rate on the debt payments would increase the "payoff" cost of the Amway Center over time and the Orlando Sentinel pointed out that it would be harder to seek lending for the other phases of the project such as the "$425 million Dr. Phillips Center for the Performing Arts and the $175 million renovation of the Florida Citrus Bowl stadium." [17]

The downgrade to "junk" of the Amway Center's debt—although reversible—signals that unless local government either expands tax revenue or drastically reduces both Amway Center and non-center expenses, creditors could in just a short few years seek bankruptcy relief in the form of repossession or auctioning off the new center. Such a move would probably not threaten the Magic's status as tenant in the venue.[citation needed] 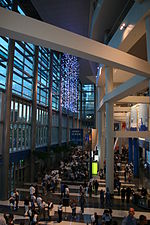 Populous (formerly HOK Sport) was named the Architect of Record on August 3, 2007, with Smith Seckman Reid and Walter P Moore Engineers and Consultants as planning partners.[18]

California-based art curator Sports and the Arts assembled the Amway Center Art Collection. The collection includes more than 340 works of art, including about 200 museum-quality photographs. Fourteen of the 21 artists housed in the collection represent Central Florida. The Amway Center Art Collection includes over 140 pieces of fine art paintings and mixed media originals, over 200 photographs, and graphic wall treatments highlighting both the Orlando Magic and the spirit of Orlando and Central Florida.

Responsive to a challenging 876,000 SF program, the design intention of the Amway Events Center was to mediate its disparate context of elevated highways, central business district and low-rise housing. The simple, planar form of precast, aluminum and glass presents a timeless civic quality. The solidity of the precast and aluminum skin is punctured in carefully considered locations with expansive areas of glass including a crystalline entry lobby facing historic Church Street, blurring the boundary of inside and outside.

The elevated I-4 freeway bordering the east side of the site posed a distinct challenge, threatening to disconnect the arena both physically and psychologically from the downtown core. In response, the corner of the arena is anchored by a diaphanous feature tower bathed in color changing LED lighting that reveals the color and pageantry of sporting and entertainment activities within while marking the facility within the flat topography of downtown Orlando. This tower is both architectural and occupied – housing the Orlando Magic Team Store, hospitality space, Gentleman Jack Terrace and rooftop Sky Bar. The latter two are exterior spaces that take full advantage of the warm Orlando climate, commanding views to the plaza below and the greater community beyond. Further city connection is achieved via a 40’ × 60’ LED video feature that addresses downtown from an elevated façade position above the highway.

The heart of the facility is anchored by a complex and varied seating bowl. Designed with long-term flexibility and changeability in mind, it responds to definitive design goals posed by the team.

Amway Center is one of the most technologically advanced venues in the world. Inside the building, a unique centerhung installation, manufactured by Daktronics of Brookings, South Dakota, is the tallest in any NBA venue.[19] It maximizes creative programming options by using high resolution, 6mm-pixel technology on each of the 18 displays, including two digital ring displays and four tapered corners. Additional displays include approximately 2,100 feet (640 m) of digital ribbon boards, the largest of which is a 360-degree, 1,100 feet (340 m) display surrounding the entire seating bowl. These displays have the ability to display exciting motion graphics and real time content, such as in-game statistics, out-of-town scores, and closed captioning information.[20] Outside the building, a large display utilizes more than 5,000 Daktronics ProPixel LED sticks, each a meter long, which make up a 46 feet (14 m) by 53 feet (16 m) video display. This display will reach millions of motorists traveling by the Amway Center on Interstate 4.[20]

Amway Center has an assortment of mid-level luxury seats and club seating, located below the upper bowl.[21] This contrasts Amway Arena's design as its luxury boxes are above all seats and suspended from the ceiling. The arena's design was unveiled at Amway Arena on December 10, 2007, with an official press release the next day.[22] The floor of Amway Center is designed with arena football in mind, as it features more retractable sections that will permit squared end zone corners, a feature previously not possible for Orlando Predators games.

Magic owner Rich DeVos speaking to fans before the first Magic home game in the new arena. (Notice the parquet flooring; only the Boston Celtics currently utilize the same kind of flooring.)

The official ribbon cutting ceremony and dedication took place on September 29, 2010 at 10:01 AM. The general public was invited to enter the building where Orlando Mayor Buddy Dyer gave his annual State of Downtown address. The first ticketed event was a Vicente Fernández concert on October 8. The Orlando Magic hosted their first preseason game at Amway Center on October 10 against the New Orleans Hornets when they won by a historic margin of 54 points, while the 2010-11 regular season home opener took place on October 28 against the Washington Wizards.