From Infogalactic: the planetary knowledge core
Jump to: navigation, search
This article is about Tudor heir to the English throne. For her cousin and wife of the 1st Earl of Ancram, see Anne Stanley, Countess of Ancram.

Anne Stanley, Countess of Castlehaven (May 1580 – c. October 1647) was the eldest daughter and heir of Ferdinando Stanley, 5th Earl of Derby and Alice Spencer. According to the will of Henry VIII and the Third Succession Act, she was heir presumptive to the English throne upon the death of Elizabeth I.

Her paternal grandparents were Henry Stanley, 4th Earl of Derby and Lady Margaret Clifford. Margaret was a daughter of Henry Clifford, 2nd Earl of Cumberland and Lady Eleanor Brandon. Eleanor was herself the youngest daughter of Charles Brandon, 1st Duke of Suffolk and Mary Tudor, Queen of France.

Heir to the English throne

According to the Will of Queen Elizabeth's father, King Henry VIII, the descendants of his older sister, Margaret Tudor, being foreigners, were excluded from the succession to the throne, and after his own three children the throne was to pass to the descendants of Henry's younger sister, Mary Tudor, Queen of France. This left Anne Stanley as first in line after her grandmother's death in 1596.

Senior to Anne Stanley's claim had been that of Mary Tudor's other granddaughters, Lady Jane Grey, Lady Catherine Grey, and Lady Mary Grey. Lady Jane Grey, England's nine-day Queen after the death of Edward VI, was executed before she could have children; her third sister, Lady Mary Grey, also died without issue; however, her second sister, Lady Catherine Grey, secretly married Edward Seymour, 1st Earl of Hertford, and Elizabeth declared this marriage invalid, which made Catherine's two sons illegitimate, although the validity of the marriage was later confirmed by King James I. Following the death of Lady Mary Grey in 1578, Anne Stanley's grandmother, Margaret Stanley, Countess of Derby, assumed the senior position among the descendants of Mary Tudor as heir to the English crown on the death of her cousin Queen Elizabeth. Margaret died in 1596, and as her son Ferdinando had predeceased her, Anne inherited her claims.

However, by the time of Elizabeth's death, James VI of Scotland, the great-grandson and senior heir general of Margaret Tudor, Mary Tudor's older sister, was deemed to be Elizabeth's heir, and Elizabeth had favoured him as her successor for several years before her death in 1603. Anne, and the Will of Henry VIII, were thus passed over in favour of James, who became King James I of England.

Anne was an unmarried woman at the time of Elizabeth's death in 1603.

On 22 July 1624 at Harefield, Anne Chandos married Mervyn Tuchet, 2nd Earl of Castlehaven, thus becoming Countess of Castlehaven. The couple had one child together, a daughter, Anne Tuchet, who died young.[1] The marriage was unhappy, and the Countess accused her husband and his manservant, Giles Browning alias Broadway, of rape, after she bore a child to the manservant. Further charges were brought against her husband on the complaint of her stepson, James Tuchet, 3rd Earl of Castlehaven, and this resulted in the execution of her husband and his manservant for sexual crimes.

Anne, Countess of Castlehaven, died at Ruislip, and was buried on 11 October 1647.

Involvement in the trial against her second husband

Lady Anne Stanley was involved in the trial against her husband, which also attracted attention to her personal private affairs. At his trial it was claimed that in 1621 Henry Skipwith arrived at Fonthill Gifford and within a few years was so close to the Earl that he sat at the family table and was to be addressed as “Mister” by the servants. Several years later Giles Broadway arrived at the mansion and received a similar treatment. It was not long before the Earl was providing Skipwith with an annual pension to spend and attempting to have Skipwith inseminate his daughter-in-law so as to have an heir from Skipwith instead of his son. In fact the countess and Skipwith had an adulterous relationship.

His son, James, claimed that the extent of Castlehaven's uxoriousness toward his male favorites lead to his initial registration of complaint in October 1630.[2] Castlehaven's trial aroused continuing public debate, witnesses were almost certainly suborned, he maintained his innocence to the last, the jury was split on both charges, almost evenly on the sodomy charge, and the case remains of interest to some as an early trial concerning male homosexuality. In the long run the trial's greatest influence proved to have been as a precedent in spousal rights, the leading case behind an injured wife's right to testify against her husband.[3]

The charges were brought against Castlehaven on the complaint of his heir, who feared disinheritance, and were heard by the Privy Council, under the direction of Thomas Coventry, Lord High Steward. The Countess described a household she said was infested with debauchery. The Attorney-General explained to the court the Earl had become ill because he believed not God and this impiety made Castlehaven unsafe. The Earl insisted he was not guilty but that his wife and son had conspired in this attempt to commit judicial murder.

All witnesses against him would gain materially by his death. "News writers throughout England and as far away as Massachusetts Bay speculated about the outcome."[3]

The page who was executed, Laurence FitzPatrick, testified that Anne, Countess of Castlehaven, "was the wickedest woman in the world, and had more to answer for than any woman that lived."

Cokayne, in the Complete Peerage adds that the death of the Earl was certainly brought about by the Countess's manipulations, and her unquestionable adultery with one Ampthill and with Henry Skipwith, renders her motive suspicious.

According to Cynthia B. Herrup,[4] Anne was the equal of Lord Castlehaven in immorality.

Under the attainder Castlehaven forfeited his English Barony of Audley, created for heirs general, but retained his Irish Earldom and Barony since it was an entailed honour protected by the statute De Donis. When he was beheaded on Tower Hill on 14 May 1631, those Irish titles passed to his son, James.

There are no descendants of Lady Anne Stanley recorded living after 1826, although this does not necessarily mean that her line ever went extinct. However, if her line did fail, then her right of succession to the throne of England would have passed to the heirs of her sister Lady Frances Stanley (born 1583). Lady Frances' senior descendant, William Villiers, 10th Earl of Jersey, is said to be the heir to Lady Anne Stanley's claim to the throne of the Kingdom of England. However, it has been pointed out that Lord Jersey's grandfather, George Child Villiers, 9th Earl of Jersey, had been divorced from his first wife before he married Lord Jersey's grandmother. In the opinion of some legitimists, no English law passed since 1603 is valid because Lady Anne and her heirs were not in possession of the throne. They further claim that under the laws of 1603, the 9th Earl of Jersey's divorce was not valid, his remarriage during his ex-wife's lifetime was null and void, and the children of the latter marriage were ineligible to inherit his claim to the throne. Legitimists of this type claim that the current holder of the Stanley claim to the throne of England is Lady Caroline Ogilvy, only child of the 9th Earl's first marriage. The heir apparent is her son, Timothy Elliot-Murray-Kynynmound, 7th Earl of Minto, who would hold the claim to the Duchy of Cornwall. 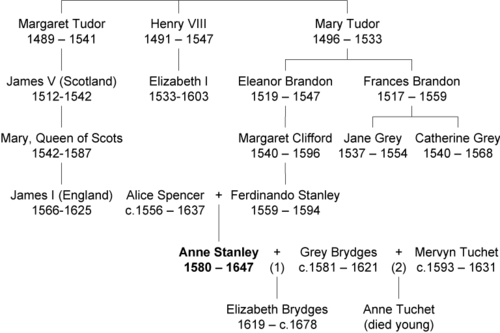