The Anti-Comintern Pact was an anti-communist pact concluded between Nazi Germany and the Empire of Japan (later to be joined by other, mainly fascist, governments) on November 25, 1936 and was directed against the Third (Communist) International.

"recognizing that the aim of the Communist International, known as the Comintern, is to disintegrate and subdue existing States by all the means at its command; convinced that the toleration of interference by the Communist International in the internal affairs of the nations not only endangers their internal peace and social well‑being, but is also a menace to the peace of the world desirous of co‑operating in the defense against Communist subversive activities"

The origins of the Anti-Comintern Pact go back to the autumn of 1935, when various German officials both within and outside the Foreign Ministry were attempting to balance the competing demands upon the Reich's foreign policy by its traditional alliance with China versus Hitler's desire for friendship with China's archenemy, Japan.[1] In October 1935, the idea was mooted that an anti-Communist alliance might be able to tie in the Kuomintang regime, Japan and Germany.[1] In particular, this idea appealed to Joachim von Ribbentrop, the Special Ambassador at Large and head of the Dienststelle Ribbentrop and the Japanese Military Attaché in Berlin, General Oshima Hiroshi, who hoped that such an alliance might lead to China's subordination to Japan.[1] Lack of Chinese interest doomed the project's original intention, but October–November 1935, Ribbentrop and Hiroshi worked out a treaty directed against the Comintern.[1] The Pact was to be originally introduced in late November 1935 with invitations for Britain, Italy, China and Poland to join.[1] However, concerns by the German Foreign Minister Baron Konstantin von Neurath and War Minister Field Marshal Werner von Blomberg that the pact might damage Chinese–German relations plus political disarray in Tokyo following the failed military coup of February 26, 1936 led to the Pact's being shelved for a year.[1] By the summer of 1936, the increased influence of the military in the Japanese government, concerns in Berlin and Tokyo about the Franco-Soviet alliance, and Hitler's desire for a dramatic anti-Communist foreign policy gesture that he believed might bring about an Anglo-German alliance led to the idea of the Anti-Comintern Pact being revived.[1] The Pact was initialed on October 23, 1936, and signed on November 25, 1936.[1] In order to avoid damaging relations with the Soviet Union, the Pact was supposedly directed only against the Comintern, but in fact contained a secret agreement that in the event of either signatory power becoming involved with a war with the Soviet Union, the other signatory power would maintain a benevolent neutrality.[1] 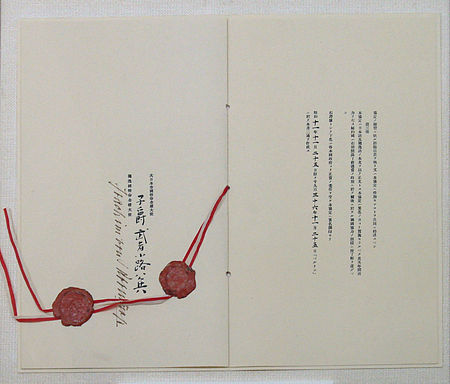 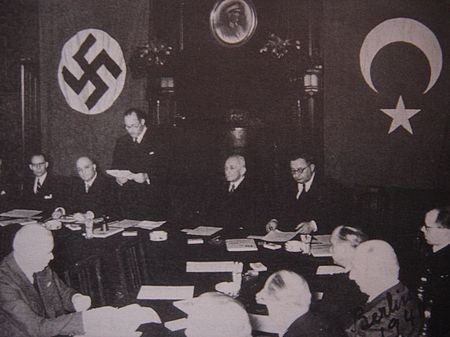 On November 6, 1937, Italy also joined the pact,[2] thereby forming the group that would later be known as the Axis Powers. Italy's decision was more or less a reaction against the failed Stresa Front, the Franco-British initiative of 1935 designed to keep Nazi Germany from extending beyond its present borders. In particular, both nations tried to block "German expansionism", especially the annexation of Austria, which was also in Italy's best interests to prevent. Distrustful relations and Benito Mussolini's own expansionism furthered the distance between Italy and the United Kingdom, as well as France. Italy invaded the Ethiopian Empire in October 1935, an act of unprovoked aggression that was a breach of League of Nations policy. Nevertheless, Britain and France hashed out a secret agreement with Italy to give it two-thirds of Ethiopia, the Hoare–Laval Pact. When this information was leaked to the public in Britain and France, their governments were mired in scandal and the British Foreign Secretary, Samuel Hoare, was forced to resign. Consequently, the Hoare-Laval Pact was aborted.

Earlier, in June 1935, the surprise Anglo-German Naval Agreement was signed between the United Kingdom and Nazi Germany. This marked the beginning of a series of attempts by Adolf Hitler to improve relations between the two countries, form a pact, and isolate the Soviet Union, while both the Soviet Union and Britain attempted to do the same and isolate Germany. Hitler also made an effort to influence the Poles into joining the Anti-Comintern Pact and spoke of his intention to settle territorial disputes between Germany and Poland.[3][4][5][6][7] However, Poland refused Germany's terms, fearing that an alliance with Hitler would render Poland a German puppet state. At the time, many Japanese politicians, including Admiral Isoroku Yamamoto, were shocked[citation needed] by the Anglo-German naval agreement, but the leaders of the military clique then in control in Tokyo concluded that it was a ruse designed to buy the Nazis time to build up their navy. They continued to plot war against either the Soviet Union or the Western democracies, assuming Germany would eventually act against either of them. Hitler's efforts to develop relations with Britain eventually failed.

In August 1939, Germany broke the terms of the Anti-Comintern Pact when the Molotov–Ribbentrop Pact was signed between the Soviet Union and Germany. However, by 1940, Hitler began to plan for a potential invasion (planned to start in 1941) of the Soviet Union. The German foreign minister, Joachim von Ribbentrop, was sent to negotiate a new treaty with Japan. On September 25, 1940, Ribbentrop sent a telegram to Vyacheslav Molotov, the Soviet foreign minister, informing him that Germany, Italy and Japan were about to sign a military alliance. Ribbentrop tried to reassure Molotov by claiming that this alliance was to be directed towards the United States and not the Soviet Union:

"Its exclusive purpose is to bring the elements pressing for America's entry into the war to their senses by conclusively demonstrating to them if they enter the present struggle they will automatically have to deal with the three great powers as adversaries."

This was welcomed by the Soviet Union, which went as far as to propose two months later to join Axis, as claimed by Mark Solonin.[8] The preliminary condition, unacceptable for Germany, was to greatly extend Soviet sphere of influence to include: Bulgaria, the Bosphorus, the Dardanelles, and further south "towards Persian Gulf".[8]

The Anti-Comintern Pact was revised in 1941, after Germany's assault on the Soviet Union that commenced with Operation Barbarossa and on November 25 its renewal for another five years was celebrated. This time the signatories were:

The government of occupied Denmark demanded four exemptions to make clear they took upon themselves no military or political obligations, that the only actions against communists would be police enforcements, that the actions would apply only to Denmark's own territory, and that Denmark remained a neutral country. The German Foreign Minister Joachim von Ribbentrop was furious and in a fit threatened the Danish Foreign Minister Erik Scavenius with arrest. In the end Ribbentrop settled down and the Danish addendum was accepted as a secret one with only a few minor changes. The secrecy was the German demand, to avoid diluting the propaganda effect; this apparent full participation damaged Denmark's reputation as a "neutral" country. Several Danish diplomats stationed in Allied countries decided to distance themselves from the government after the signing.[11]