From Infogalactic: the planetary knowledge core
(Redirected from Assuwa)
Jump to: navigation, search

The Assuwa league was a confederation of states in western Anatolia, defeated by the Hittites Tudhaliya I around 1400 BC. The league formed to oppose the Hittite empire. The list of its members contains 22 names, including [...]uqqa, Warsiya, Taruisa, Wilusiya and Karkija (Caria). 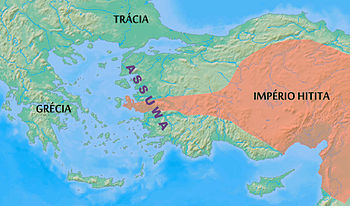 Geographical location of Assuwa in 14th and 13th Century BC

Some of the identifications of these names are disputed. Wilusiya is commonly identified with Ilion (Troy), and Taruisa with the surrounding Troad, and Warsiya may be associated with Lukka (Lycia). However, identification of [..]uqqa with later-attested Lukka (Lycia) is problematic, because that would put the Assuwa league both north and south of Arzawa in southwestern Anatolia. Assuwa appears to lie north of Arzawa, covering the northwestern corner of Anatolia. Homer in the Iliad seems to refer to two Lycias; in 2.876-77, 5.479 Sarpedon is a leader of "distant Lycia" while in 2.824ff. 5.105 Pandarus is another leader of Lycians from around Mount Ida near Troy, so that Lukka vs. [...]uqqa may find its explanation in these terms. However, the Assuwa League included Karkija (Caria), in southwest Anatolia, south of even the proposed Lukka (Lycia). So, since also Assuwa was only a confederate league, it could easily have included a wide-ranging array of anti-Hittite minor powers, across the region.

This confederacy is mentioned only in the fragmentary tablets making up Laroche's CTH 142/85. Since Tudhaliya IV was known to have had frontier trouble between 1250 and 1200 BC,[citation needed] and since the text lists rebel nations in much the way Ramesses II does, the first consensus dated this text — and so Assuwa — to Tudhaliya IV. This dating appears in all older literature on the fall of the Hatti, and crops up every now and then to this day. However the consensus has since then come around to dating Assuwa to an earlier Tudhaliya, which means prior to Suppiluliuma and so prior to 1350 BC.[citation needed]

Assuwa has been suggested as the origin for the name of the continent Asia (Bossert, 1946).

A number of fragmentary Hittite records imply that the anti-Hittite rebellion of the Assuwa league received a certain decree of support from Mycenaean Greece (Ahhiyawa in Hittite). [1]