Carchemish (/kɑːrˈkɛm.ɪʃ/ IPA-ified from «kär-kĕm´ĭsh), also spelled Karkemish (Hittite: Karkamiš;[1] Turkish: Karkamış; Greek: Εὔρωπος; Latin: Europus), was an important ancient capital at times independent but also having been part of the Mitanni, Hittite and Neo Assyrian Empires, now on the frontier between Turkey and Syria. It was the location of an important battle between the Babylonians and Egyptians, mentioned in the Bible (Jer. 46:2). Modern neighbouring cities are Karkamış in Turkey and Jarabulus in Syria (also Djerablus, Jerablus, Jarablos, Jarâblos) [5]; the original form of the modern toponym seems to have been Djerabis or Jerabis, likely derived from Europos, the ancient name of the Hellenistic-Roman settlement. 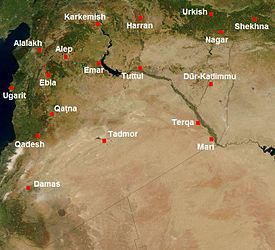 Map of Syria in the second millennium BC, showing the location of Carchemish, or "Karkemish."

The site has been occupied since the Neolithic and Chalcolithic periods[2] (pot burials), with cist tombs from ca. 2400 BC (Early Bronze Age). The city is mentioned in documents found in the Ebla archives of the 3rd millennium BC. According to documents from the archives of Mari and Alalakh, dated from ca. 1800 BC, Carchemish was then ruled by a king named Aplahanda and was an important center of timber trade. It had treaty relationships with Ugarit and Mitanni (Hanilgalbat). In ancient times, the city commanded the main ford in the region across the Euphrates, a situation which must have contributed greatly to its historical and strategic importance.

Pharaoh Thutmose I of the Eighteenth Dynasty erected a stele near Carchemish to celebrate his conquest of Syria and other lands beyond the Euphrates. Around the end of the reign of Pharaoh Akhenaten, Carchemish was captured by king Suppiluliuma I of the Hittites (ca. 14th century BC), who made it into a kingdom ruled by his son Piyassili.

The city became one of the most important centres in the Hittite Empire, during the Late Bronze Age, and reached its apogee around the 11th century BC. While the Hittite empire fell to the Sea Peoples during the Bronze Age collapse, Carchemish survived the Sea People's attacks to continue to be the capital of an important Neo-Hittite kingdom in the Iron Age, and a trading center.[3] Although Ramesses III states in an inscription dating to his 8th Year from his Medinet Habu mortuary temple that Carchemish was destroyed by the Sea Peoples, the city evidently survived the onslaught.[4] King Kuzi-Tesup I is attested in power here and was the son of Talmi-Teshub who was a contemporary of the last Hittite king, Suppiluliuma II.[5] He and his successors ruled a small empire stretching from Southeast Asia Minor to Northern Syria and the West bend of the Euphrates[6] under the title 'Great King.' This suggests that Kuzi-Tesub saw himself as the true heir of the line of the great Suppiliuma I and that the central dynasty at Hattusa was now defunct.[7] This powerful kingdom lasted from c.1175 to 975 BC when it began losing control of its imperial possessions and became a more local city state centered around Carchemish.[8][9]

The patron goddess of Carchemish was Kubaba, a deity of apparently Hurrian origins.[10] She was represented as a dignified woman wearing a long robe, standing or seated, and holding a mirror. The main male deity of the town was Karhuha, akin to the Hittite god Kurunta.

In the 9th century BC, King Sangara paid tribute to Kings Ashurnasirpal II and Shalmaneser III of Assyria. It was conquered by Sargon II in 717 BC, in the reign of King Pisiri. In 2015, for the first time, a reference has been found for Sangara in a hieroglyphic inscription originally coming from the site itself.

In the summer of 605 BC, the Battle of Carchemish was fought there by the Babylonian army of Nebuchadnezzar II and that of Pharaoh Necho II of Egypt and the remnants of the Assyrian army. (Jer. 46:2). The aim of Necho's campaign was to contain the Westward advance of the Babylonian Empire and cut off its trade route across the Euphrates. However, the Egyptians were defeated by the unexpected attack of the Babylonians and were eventually expelled from Syria.

Carchemish is now an extensive set of ruins (90 hectares, of which 55 lie in Turkey and 35 in Syria), located on the West bank of Euphrates River, about 60 kilometres (37 mi) southeast of Gaziantep, Turkey, and 100 kilometres (62 mi) northeast of Aleppo, Syria. The site is crossed by the Baghdad Railway that now forms the Turco-Syrian border. A Turkish military base has been built on the Carchemish acropolis and Inner Town, and access to that part of the site is presently restricted. Most of the Outer Town lies in Syrian territory. 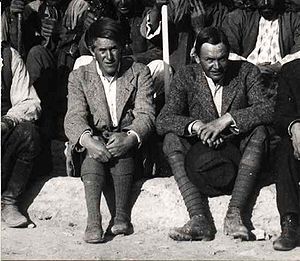 Carchemish has always been well known to scholars because of several references to it in the Bible (Jer. 46:2; 2 Chr. 35:20; Isa. 10:9) and in Egyptian and Assyrian texts. However, its location was identified only in 1876 by George Smith. Carchemish had been previously identified, incorrectly, with the Classical city of Circesium, at the confluence of the Khabur River and the Euphrates,[11] while some early scholars thought that Jarabulus could be Hierapolis Bambyce, although that site is actually located at Manbij in Syria.

The site was excavated by the British Museum, between 1878 and 1881 through Consul Patrick Henderson and between 1911 and 1914 under the direction of D. G. Hogarth. In 1911 on the field there were D. G. Hogarth himself, R. C. Thompson, and T. E. Lawrence ("Lawrence of Arabia"), from 1912 to 1914 C. L. Woolley and T. E. Lawrence, while a last campaign took place in 1920 with C. L. Woolley and Philip Langstaffe Ord Guy.[12][13][14][15] Excavations were interrupted in 1914 by World War I and then ended in 1920 with the Turkish War of Independence.[16] These expeditions uncovered substantial remains of the Assyrian and Neo-Hittite periods, including defensive structures, temples, palaces, and numerous basalt statues and reliefs with Luwian hieroglyphic inscriptions.

With the completion of mine clearing operations on the Turkish portion of the site, archaeological work was resumed in September 2011.[17] Excavations in the Inner and Outer Towns were carried out by a joint Turco-Italian team from the Universities of Bologna [6], Gaziantep [7] and Istanbul [8] under the direction of Prof. Dr. Nicolò Marchetti.[18] The second season, from August to November 2012, brought several new art findings and archaeological discoveries, the most remarkable of which is Katuwa's Palace (c. 900 BC) to the east of the Processional Entry. The third season, from May to October 2013, extended the exposure of Katuwa's palace, retrieving a cuneiform tablet with an exorcism in the name of the god Marduk, as well as the ruins of Lawrence's excavation house in the Inner Town, from which literally hundreds of fragments of sculptures and hieroglyphic inscriptions have been retrieved. The fourth season started in May 2014 and continued through October 2014: in Katuwa's palace several orthostats exquisitely carved with a procession of gazelle-bearers have been found, some of them in situ, next to a courtyard paved with squared slabs. In the Neo Assyrian period that courtyard was covered by a mosaic floor made of river pebbles forming squares alternating in black and white color. Lawrence's excavation house has been completely excavated. During the fifth season, April to July 2015, more significant discoveries have been made in the palace area, both for Late Hittite sculptures, and the Neo Assyrian refurbishment, with tens of items - including two fragments of clay prysmatical cylinders inscribed with a unique cuneiform text by Sargon, intended for display, telling how he captured and reorganized the city of Karkemish - retrieved in a 14-m-deep well, sealed in 605 BC at the time of the Late Babyonian takeover. Conservation and presentation works have now been completed in view of the opening in May 2016 of an archaeological park at the site, thanks to the support also of Gaziantep Metropolitan Municipality [9]. Financial support has been received by the three Universities mentioned above, by the Italian Ministry of Foreign Affairs [10], Şahinbey Municipality [11], Sanko Holding [12] and Inta A.Ş.

Archaeological investigations on the Syrian side have been conducted as part of the Land of Carchemish project [13]: investigations of the Outer Town of Carchemish were undertaken in conjunction with the DGAM in Damascus and with the funding and sponsorship of the Council for British Research in the Levant and of the British Academy, under the direction of Professors T. J. Wilkinson and E. Peltenburg.[19] The Outer Town area lying in Syria has been designated an endangered cultural heritage site and labelled “at risk” by the Global Heritage Fund [14], due to the agricultural expansion and, especially, the urban encroachment. The field assessment of the Syrian part of the Outer Town proved that, unfortunately, not only have parts of the modern border town of Jerablus encroached upon the Outer Town, but also since around 2000, a number of houses have been constructed within the agricultural area between the border (demarcated by the so-called Baghdad Railway) and the modern town.[20] 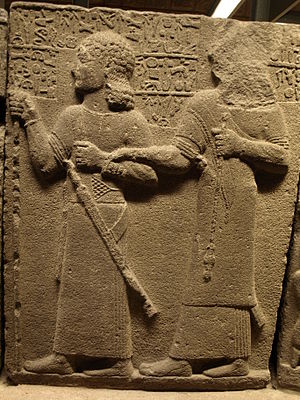