The BMW Z4 is a rear-wheel drive sports car by the German car maker BMW. It follows a line of past BMW roadsters such as the BMW Z1, BMW 507, BMW Z8, and the BMW Z3. The Z4 replaces the Z3. First generation production started in 2002 at BMW USA's Greer, South Carolina plant, with production of both roadster and coupe forms. When debuted, it won Automobile Magazine "Design of the Year Award". Starting with the 2009 model year, the second-generation Z4 is built at BMW's Regensburg, Germany plant as a retractable hardtop roadster. In 2009, the BMW Z4 won the Red Dot Design Award.

The first-generation BMW Z4 was designated the E85 in roadster form and E86 in coupé form. It was designed by Danish BMW-designer Anders Warming.[1] 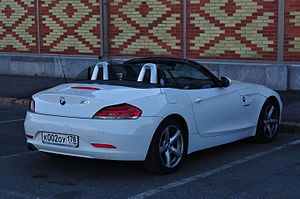 The vehicle was originally announced on 13 December 2008.[3][4][5] The vehicle was unveiled in 2009 North American International Auto Show in Detroit.[6] This time a coupé-convertible with folding hardtop, the Z4 (E89) will be built in Regensburg alongside the (E93) 3-Series Cabrio, likely due to the U.S. plant needing more room for SUV production. It moved upmarket, dropping the small four-cylinder base engine. In late 2011 BMW reintroduced a 2.0 litre, 4-cylinder powerplant with twin-scroll turbo (N20 engine variant).