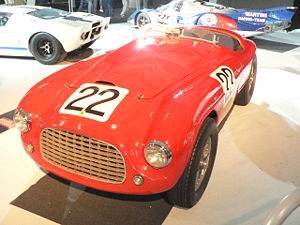 A barchetta (Italian pronunciation: [barˈketta], "little boat" in Italian) was originally an Italian style of open 2-seater sports car which was built for racing. Weight and wind resistance were kept to a minimum, and any unnecessary equipment or decoration were sacrificed in order to maximize performance.

Although most barchettas were made from the late 1940s through the 1950s, the style has occasionally been revived by small-volume manufacturers[1] and specialist builders[2] in recent years.

Typically handmade in aluminium on a tubular frame, the classic barchetta body is devoid of bumpers or any weather equipment such as a canvas top or sidescreens, and has no provision for luggage. Some barchettas have no windscreen; others, a shallow racing-type screen or aero screen(s). [3]

The classic barchetta either had no doors, in which case entry and exit entailed stepping over the side of the car, or very small doors without exterior handles.

Giovanni Canestrini, when editor of La Gazzetta dello Sport,[4] a popular Italian sporting newspaper, was the first to use the term "barchetta" on a car, using it to describe the new Ferrari 166MM displayed at the 1948 Turin Auto Show. The name has been associated with the model ever since.

The MM in the car’s designation stood for Mille Miglia, the race it won in 1948 and 1949. In 1949 the 166MM barchetta also won the 24 Hours of Le Mans (driven by Luigi Chinetti and Lord Selsdon) and the Targa Florio (with Clemente Biondetti and Igor Troubetzkoy), the only car ever to win all three races in the same year. It also won the 1949 Spa 24 Hours. The car’s unadorned, lightweight aluminium body was designed by Carrozzeria Touring’s head of design, Carlo Felice Bianchi Anderloni.[citation needed]

Motor Trend Classic rated the 166MM barchetta sixth out of the ten "greatest Ferraris of all time".[citation needed] 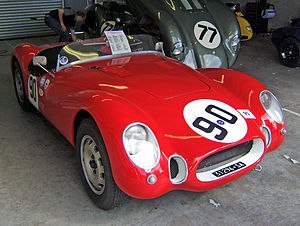 Other, even more diminutive OSCA barchettas were powered by engines of 750 cc and 850 cc.[citation needed]

Giovanni Moretti, another designer and manufacturer, also made several small barchettas in the 1950s.[7][8][9][10]

The 1966 Abarth 1000SP barchetta[11] was a successful race car, and in 2007 the car design firm Carrozzeria Bertone celebrated its 95th anniversary with the Fiat Panda-based Fiat Barchetta Bertone, an "open-topped strictly two-seater sports car that calls to mind the Italian racing cars of the 1950s. In this case, the design explicitly cites the Fiat 500 with the barchetta bodywork created by the young Nuccio Bertone in 1947 as a one-off for his personal use in races [...and] projects the concept of the barchetta, a historic icon in the legend of Italian motorsports, into the future with purposeful elegance and sophisticated irony."[12] 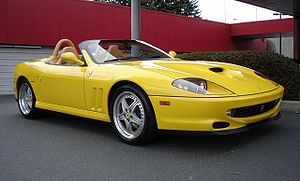 Ferrari revived the name in 2001 for their 550 Pininfarina Barchetta, which marked Pininfarina’s 70th anniversary. The car was first shown at the 2001 Salon de l'Automobile and 448 examples were built. It is "[i]n many ways...the legitimate successor to such legendary open Ferraris as the 166MM..."[13] Designed as a roadster for use on public roads and not as a full-bred racing car, the 550 Barchetta has a rudimentary convertible top "whose mechanism is said to require strength, skill, and patience."[13] The top is intended only for emergency use in a sudden downpour and the manufacturer advises against using it at speeds above 70 miles per hour (110 km/h). The top "doesn't look as if it would survive the sacrilege of an automatic carwash."[13] The list price of the 550 Barchetta was $245,000. 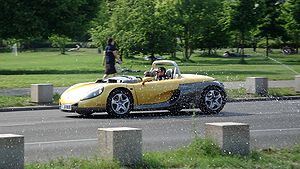 The 1995-97 Renault Spider, although mid-engined, was designed very much in the barchetta style, and also in the barchetta tradition, as it was intended for racing. Renault sponsored a one-make race series for it. Although the Spider is road-legal it has no weather protection, and drivers of first-series Spiders usually wear a helmet on the road as these early models were sold without the windscreen that came with the later models.

Despite its name, the 1995-2005 Fiat Barchetta was not a sports car in the barchetta style or tradition.

"Red Barchetta" is a song by rock band Rush from their album Moving Pictures.