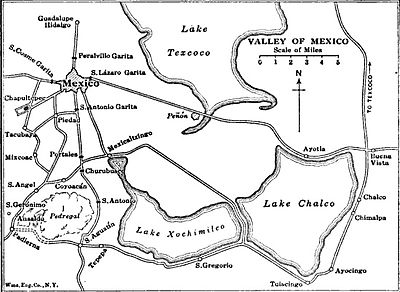 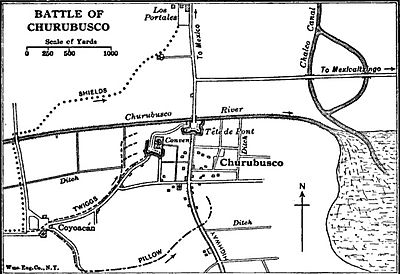 The Battle of Churubusco took place on August 20, 1847, while Santa Ana's army was in retreat from the Battle of Contreras (Padierna), Mexican–American War. After defeating the Mexican army at Churubusco, the U.S. Army was only 5 miles (8 km) away from Mexico City.

Following their defeats at Contreras Santa Ana ordered Major General Nicolás Bravo to retreat from San Antonio to Churubusco.[1]:296 Santa Ana also ordered Major General Manuel Rincon to hold the Franciscan Convent of San Mateo in Churubusco, with earthworks and seven guns, and placed General Francisco Perez on the tete-de-pont on the south bank of the river.[1]:296 Two regiments were placed along the river while the convent included the Bravo Battalions of the Mexico City National Guard and the San Patricio Battalion, plus Santa Ana formed a reserve along the highway to the north.[1]:296

During retreat from San Antonio, the Mexican defenders (part of the 1st Line of Defense (or sometimes the "Army of the Center") with Col. F. Villarreal and about 2,000 men: 700 of the "Hidalgo," 500 of the "Victoria" (Lt. Col. P. Jorrin) Natl. Guards Battalions, and 800 others: under Cols. A. Zerecero & J. G. Perdigon Garay), were struck in flank by Clarke's Brigade. Garland moved forward as the Mexicans withdrew from San Antonio and a general and four guns.[1]:297

Scott ordered an attack on the convent.[1]:297 In addition to the stone walls of the convent, the defenses included a series of incomplete trenches the Mexicans had begun digging prior to the attack.[4] Some elements of the Tlapa and Lagos Battalions arrived as reinforcements. Three cannon were placed on the right; two in the center; and the remaining two on the left. Independencia was assigned to defend the upper walls, the right flank leading to the bridge, the unfortified south and north sides, and two adobe huts further forward on the battlefield. The Bravos and the San Patricios were stationed on the left, behind barricades. In support along the Rio Churubusco was the Perez Brigade : 2,500 men (11th Line, 1st, 3d & 4th Light Infantry Regiments)

Worth's division took on the tete-de-pont, while Twiggs' the convent.[1]:298 Rincon's gunners were able to force Taylor's battery to withdraw,[1]:298 and Perez's defense on the tete-de-ponte twice repulsed Major Benjamin Bonneville's 6th Infantry charge.[1]:298 The attack by Franklin Pierce and James Shields, crossing the river on the Coyoacan-Mixcoac road in an attempt to cut off the Mexican retreat, was also stopped.[1]:298 However, Worth turned the Mexican left and crossed the river, while the 8th and 5th Infantry took the tete de pont.[1]:300 Capt. Duncan then set up a battery to attack the convent.[1]:300

Two of the Mexican cannons had melted and a third had fallen from its mount. Lieutenant Colonel Francisco Peñúñuri of Independencia led a handful of men in a bayonet charge and was defeated. He and Captain Luis Martínez de Castro, who had accompanied him, were killed in the battle. Officers from the Bravos attempted to raise the white flag over the convent walls on three occasions.[1]:300 They were prevented from doing so, however, by members of the San Patricios who feared the fate that awaited them if they were taken prisoner, though seventy-two men [5] were ultimately captured and court-martialed for desertion, including the leader, John O'Riley. U.S. Captain James Milton Smith finally stopped the fighting by putting up a white handkerchief.[1]:300

Scott did not continue the pursuit into Mexico City, "...willing to leave something to this republic...I halted our victorious corps at the gates of the city."[1]:301

A brigade of volunteers from New York was billeted to the convent, remaining there until September 7.

Parts of the battle were portrayed in the mini-series North and South, as well as the film One Man's Hero (1999).