The Battle of Guinea took place on the Gulf of Guinea, in western Africa, 1478, between a Portuguese fleet and a Castilian fleet in the context of the War of the Castilian Succession.

The outcome of the battle of Guinea was probably decisive for Portugal reaching a very favourable sharing of the Atlantic and territories disputed with Castile in the Peace of Alcáçovas (1479). All with the exception of the Canary Islands stayed under Portuguese control: Guinea, Cape Verde, Madeira, Azores and the exclusive right of conquering the Kingdom of Fez. Portugal also won exclusive rights over the lands discovered or that were to be discovered south of the Canary Islands. 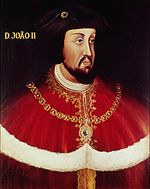 In 1478, Prince John of Portugal, who had been charged since 1474 by his father, King Afonso V of Portugal, with the administration of the Portuguese maritime expansion, received news that a large Castilian fleet of thirty five ships commanded by Pedro de Covides[4] had been sent from Seville by Isabella I of Castile and Ferdinand of Aragon to Portugal's claimed Mina, in the region of the Gulf of Guinea, to attack the Portuguese there and trade with the natives. He immediately prepared and organized a fleet of eleven ships with the objective of intercepting the Castilian expedition, giving the command of the fleet to Jorge Correia and Mem Palha, two of his knights.[5]

When the Portuguese fleet of eleven ships arrived at the Gulf of Guinea, the Castilians were already in the area for about two months trading with the Africans. Cheap goods like shells, old clothes, brass bracelets and other items were being traded in exchange for gold,[5] while slave raids along the coast of Guinea were also being conducted. 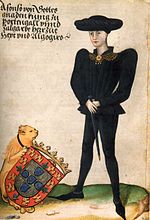 The Castilian fleet was anchored in a harbor near Mina when the Portuguese fleet initiated an attack early in the morning. The Castilians were caught by surprise and ended up being quickly and totally defeated, being forced to surrender to the Portuguese, who without much harm to themselves were able to capture the entire Castilian fleet along with its large cargo of gold.[1][2]

The captured fleet was then taken to Lisbon. The large amount of gold captured by the Portuguese was enough to finance King Afonso V of Portugal military campaign in Castile.[5]

In the following year, the Treaty of Alcáçovas was signed between Portugal and Castile, where King Afonso V of Portugal gave up on his claim to the Castilian throne, recognizing the Catholic Monarchs as sovereigns of Castile and abandoning his claim to the Canary Islands, while Queen Isabella I of Castile recognized the Portuguese hegemony in the Atlantic Ocean, confirming Portuguese sovereignty over Madeira, Azores, the Cape Verde Islands and the: