From Infogalactic: the planetary knowledge core
(Redirected from Battle of Trasimenus)
Jump to: navigation, search

The Battle of Lake Trasimene (June 24, 217 BC, April on the Julian calendar) was a major battle in the Second Punic War. The Carthaginians under Hannibal defeated the Romans under the consul Gaius Flaminius. Hannibal’s victory over the Roman army at Lake Trasimene remains, in terms of the number of men involved, the largest ambush in military history. In the prelude to the battle, Hannibal also achieved the earliest known example of a strategic turning movement.[5]

The Romans, greatly alarmed and dismayed by Tiberius Sempronius Longus’ defeat at Trebia, immediately made plans to counter the new threat from the north. Sempronius returned to Rome and the Roman Senate resolved to elect new consuls the following year in 217 BC. The new consuls were Gnaeus Servilius Geminus and Gaius Flaminius, the latter was under threat of recall from the Senate for leaving Rome without carrying out the proper rituals after being elected consul.[6] The Senate commissioned Servilius to replace Publius Cornelius Scipio and take command of his army, while Flaminius was appointed to lead what remained of Sempronius’s army. Since both armies had been weakened by the defeat at Trebia, four new legions were raised. These new forces, together with the remains of the former army, were divided between the two consuls.[7] After the battles of Ticinus and Trebia, Flaminius' army turned south to prepare a defence near Rome itself. Hannibal immediately followed, but marched faster and soon passed the Roman army. Flaminius was forced to increase the speed of his march in order to bring Hannibal to battle before reaching the city. Another force under Servilius was due to join Flaminius.

Before this could happen, Hannibal lured Gaius Flaminius' force into a pitched battle, by devastating the area Flaminius had been sent to protect. Polybius wrote that Hannibal calculated that he could draw out Flaminius into battle and that "no sooner had he left the neighbourhood of Faesulae, and, advancing a short way beyond the Roman camp, made a raid upon the neighbouring country, then Flaminius became excited, and enraged at the idea that he was despised by the enemy: and as the devastation of the country went on, and he saw from the smoke that rose in every direction that the work of destruction was proceeding, he could not patiently endure the sight."[8][9] At the same time, Hannibal tried to sever the allegiance of Rome’s allies, by proving that the Republic was powerless to protect them. However, Flaminius remained passively encamped at Arretium. Unable to goad Flaminius into battle, Hannibal marched boldly around his opponent’s left flank and effectively cut Flaminius off from Rome, providing the earliest record of a deliberate turning movement in military history. Military historian Theodore Ayrault Dodge describes the significance of this maneuver and its intended effects on the campaign:

We are told nothing about it by the ancient authors, whose knowledge of war confined them solely to the description of battles. But it is apparent enough to us […] By this handsome march Hannibal cut Flaminius off from Rome ... as he was apt to move by the flank past the Roman camp [so as] to taunt the Roman general. Here is shown …the clear conception of the enemy’s strategic flank, with all its advantages […] Nor by his maneuver had Hannibal recklessly cut himself loose from his base, though he was living on the country and independent of it, as it were; the fact is, that the complete integrity of his line of communication … was preserved. A more perfect case of cutting the enemy from his communications can scarcely be conceived. . . . If he [Flaminius] fought, it must be under morally and materially worse conditions than if his line was open; and the effect on his men of having the enemy between them and Rome . . . could not but be disastrous.

Still, Flaminius stubbornly kept his army in camp. Hannibal decided to march on Apulia, hoping that Flaminius might follow him to a battlefield of his own choosing.[10][11]

Flaminius, eager to exact revenge for the devastation of the countryside, and facing increasing political criticism from Rome, finally marched against Hannibal. Flaminius, like Sempronius, was impetuous, overconfident, and lacking in self-control.[12] His advisors suggested that he send only a cavalry detachment to harass the Carthaginians and prevent them from laying waste to any more of the country, while reserving his main force until the other consul, Servilius, arrived with his army. However, it proved impossible to argue with the rash Flaminius. Livy wrote that "Though every other person in the council advised safe rather than showy measures, urging that he should wait for his colleague, in order that joining their armies, they might carry on the war with united courage and counsels... Flaminius, in a fury... gave out the signal for marching for battle."[9] 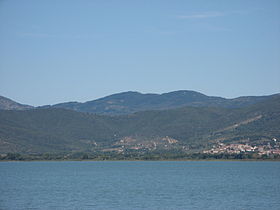 Lake Trasimene battlefield, from the lake. Hannibal's army was arrayed along the nearer wooded ridge.

As Hannibal passed Lake Trasimene, he came to a place very suitable for an ambush, and hearing that Flaminius had broken camp and was pursuing him, made preparations for the impending battle. To the north was a series of heavily forested hills where the Malpasso Road passed along the north side of Lake Trasimene. Along the hill-bordered skirts of the lake, Hannibal camped where he was in full view of anyone entering the northern defile, and spent the night arranging his troops for battle. Below the camp, he placed his heavy infantry (Iberians, Celts and Africans) upon a slight elevation. Here, they had ample ground from which they could charge down upon the head of the Roman column on the left flank, when it should reach the position.[11][13] His cavalry and Gallic infantry were concealed in the hills in the depth of the wooded valley from which the Romans would first enter, so that they could quickly sally out and close the entrance, blocking the Roman route of retreat. Then he posted his light troops at intervals along the heights overlooking the plain, with orders to keep well hidden in the woods until signalled to attack. In addition, the night before the battle commenced, Hannibal ordered his men to light campfires on the hills of Tuoro, at a considerable distance, so as to convince the Romans that his forces were further away than they actually were.[5]

From the Department of History, United States Military Academy

The morning of June 24, the Roman troops marched eastward along the road running near the northern edge of the lake. Eager for battle, Flaminius pushed his men hard and hurried up the column in the rear. Hannibal then sent a small skirmish force to draw the vanguard away from the front of the line, in order to split the Roman forces. Once all the Romans had at last marched through the foggy, narrow defile and entered the plains skirting the lake, trumpets were blown, signalling the general attack.[citation needed]

The Carthaginian cavalry and infantry swept down from their concealed positions in the surrounding hills, blocked the road and engaged the unsuspecting Romans from three sides. Surprised and outmanoeuvred, the Romans did not have time to draw up in battle array, and were forced to fight a desperate hand-to-hand battle in open order. The Romans were quickly split into three parts. The westernmost was attacked by the Carthaginian cavalry and forced into the lake, leaving the other two groups with no way to retreat. The centre, including Flaminius, stood its ground, but was cut down by Hannibal's Gauls after three hours of heavy combat.[citation needed]

In less than four hours, most of the Roman troops were killed. The Roman advance guard saw little combat and, once the disaster to their rear became obvious, fought their way through the skirmishers and out of the forest. Of the initial Roman force of about 30,000, about 15,000 were either killed in battle or drowned while trying to escape into the lake — including Flaminius himself, who was slain by the Gaul Ducarius. Another 10,000 are reported to have made their way back to Rome by various means, and the rest were captured.[14][15] Hannibal's losses were 2,500, plus "many" who died of their wounds.[16] About 6,000 Romans escaped, under the cover of fog, only to be captured by Maharbal the following day. Both Livy and Polybius wrote that Maharbal promised safe passage ("with a garment apiece") if they surrendered their weapons and armour, but Hannibal had them sold into slavery irrespective of the promise made.[17][18]

The disaster for Rome did not end there. Within a day or two, a reinforcement force of 4,000 under the propraetor Gaius Centenius was intercepted and destroyed.[19][20]

Hannibal, emerging from another brilliant victory, had successfully planned and executed the greatest ambush in history.[21] Dodge writes, “It is the only instance in history of lying in ambush with the whole of a large army.” Similarly, historian Robert L. O’Connell also writes, “[It was] the only time an entire large army was effectively swallowed and destroyed by such a maneuver.”

News of the defeat caused a panic in Rome. Quintus Fabius Maximus was elected dictator by the Roman Assembly and adopted the "Fabian strategy" of avoiding pitched conflict, relying instead on low-level harassment to wear the invader down, until Rome could rebuild its military strength. Hannibal was left largely free to ravage Apulia for the next year, until the Romans ended the dictatorship and elected Paullus and Varro as consuls. The result would be the Battle of Cannae, the worst defeat the Romans would suffer throughout the Second Punic War.[citation needed]