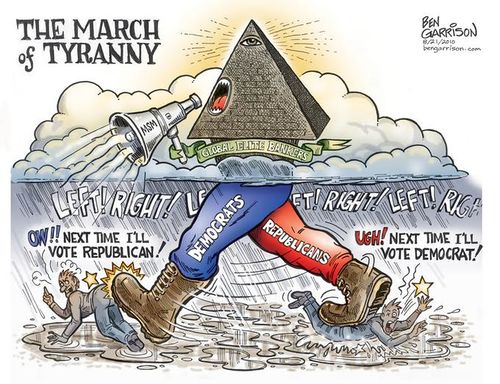 An example of Garrison's political cartoons, from a discussion on SaidIt.net about Garrison's suit against the ADL for defamation.

Ben Garrison is an American right wing, alt-right, and libertarian political cartoonist, whose work generally condemns left-wing government policies and politically correct culture, and is mostly read online. In addition he is a commercial artist and a fine artist specializing in the painterly style he calls Western Cubism.

He is also known as the subject of a long-running trolling campaign by 4chan members. Since 2010, 4chan's /pol/ board has hosted many altered Garrison cartoons that appear to promote anti-semitic and Neo-Nazi ideologies, and board members have falsely attributed many quotes promoting similar ideologies to Garrison.[3] He has detailed his experiences in his book Rogue Cartoonist.

He was deplatformed multiple times in the late 2010s social media censorship campaigns,[4] including on August 28, 2018, when his site was shut down by his web host provider after he mocked John McCain following his death,[5] but was able to find alternate hosts.

On July 7, 2019, Garrison was invited to the White House for a "Social Media Summit",[6] but he was uninvited four days later following strong political pressure by progressive activists, including the Anti-Defamation League.[7]

Garrison was born in 1957, and graduated from Angelo State University in 1979 with a B.A. in History and Fine Art. From 1978 to 1983, Garrison worked as an artist for the San Angelo Standard-Times. From 1984 to 1997, Garrison was the chief artist of the Seattle Post-Intelligencer. Garrison continued to do freelance work for the SPI until their final print issue in 2009. Since 1997, Garrison has worked as a freelance artist and owns his own company, Garrison Graphics (stylized as GrrGraphics).[8] Garrison stopped drawing editorial cartoons early in his career, but decided to do so again after the Financial crisis of 2007–08 to expose what he felt was corruption in the U.S. government, particularly Keynesianism, excessive statism, and the Federal Reserve.

Garrison is a libertarian and reader of Infowars, Drudge Report and Zero Hedge. He resides in Lakeside, Montana.[9] He is married and has one son. 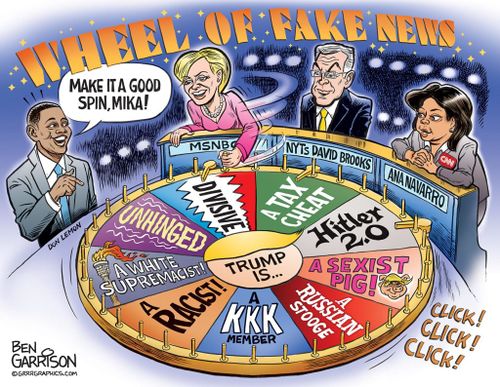 An example of Garrison's political cartoons.

His political cartoons are colorful, single panel drawings with many details and sometimes hidden " easter eggs" that mock and skewer outlandish left-wing behaviors and tropes. They appear about weekly on his blog and are reposted elsewhere. He has been positively compared to The Onion cartoonist " Kelly". While the latter uses irony to mock the fictionalized conservative cartoonist himself, Garrison's work is extremely direct and uncompromising; though both could be considered postmodern. Garrison has incorporated cultural memes like Pepe or Kek the frog in his work.

Garrison supported Donald Trump's 2016 presidential campaign, drawing him in various heroic poses while vanquishing political and cultural opponents, who were often portrayed as being degenerate. Garrison also drew the cover art of the 2016 book MAGA Mindset: Making YOU and America Great Again by Mike Cernovich, which used lessons learned from the campaign as a tool for personal growth.

In May 2016, a cartoon of Garrison compared Michelle Obama and Melania Trump in an unflattering way.[10][11] It was titled "Make the first lady great again!".[12]

In 2017, a Garrison cartoon depicted a withered green hand labeled "Rothschilds" controlling George Soros, who in turn controlled puppets H. R. McMaster and David Petraeus. This triggered strong protests from Jewish activists.[13]. Garrison replied "... nowadays anyone who even mentions the ‘R’ word is smeared as anti-Semitic. Now they want any criticism of George Soros to be silenced by the same means. They use the anti-Semitism insult as a tactic to silence critics."[14]

In July 2020, it became clear his work was read in the White House, when a communications director posted a cartoon mocking demands for stricter COVID-19 shutdowns.[16] That same month, Garrison sued the Anti-Defamation League for calling him an antisemite.[17]

Garrison says the popular painter Thomas Kinkaid had talent, but has criticized his commercial work as being false and unthinking. Worse, it becomes uninteresting after a while. Garrison has praised the work of Picasso, where every element of a painting is carefully thought out by the master. Believing that cubism remains a mostly unexplored and fertile field for further development, he paints American Western art in the abstract style "Western Cubism". Most of his paintings are representations of Old West figures with shards of motion and different viewpoints. His stated goal is to create art that can be studied for a long time, with the viewer continuing to find new interpretations to put a painting in a new light.[18]

On August 22, 2010, Garrison published a cartoon titled "The March of Tyranny" in which an Illuminati triangle represents the Federal Reserve forcing the left-right paradigm on the American people. Garrison states it "shows how the banking and corporate masters (crony capitalist fascists) control both major parties behind the scenes. They keep us distracted with left vs. right while giving us the illusion that voting for one of the other parties will solve things. It won't."[19] Not long after the cartoon was published, an altered version began circulating on 4chan's "Politically Incorrect" (/pol/) board. In the altered version, the Illuminati triangle is replaced with an anti-semitic caricature of a Jewish man known as the "Happy Merchant". On May 22, 2011, Garrison published a blog post titled "GRRR-ALERT!" in which he stated that "There’s an entity or unknown cretin out there changing my cartoons–adding in offensive Jewish stereotypes–and then spreading them throughout the internet. While leaving MY name on them."[20] Since this blog post, virtually all of Garrison's cartoons have been altered to promote anti-semitic propaganda.[21]

In July 2018, Texas libertarian politician Ron Paul tweeted a comic attributed to Ben Garrison that depicted immigrants and minorities assaulting Uncle Sam in an act of black on white violence.[22] However, the comic was found to be a heavily edited cartoon with elements from Carlos Latuff and A. Wyatt Mann's works.[23]

Garrison has tried several times to sue 4chan owner Christopher Poole but has admitted there is very little that can be done against the trolls. Garrison claims that he has identified his main troll as a man living in Florida and that the man has altered every cartoon he's drawn and has harassed him and his family.

In 2015, Garrison published the book "Rogue Cartoonist: The Internet Perils of a Citizen-Muckraker" in which he discusses his experiences with trolling. He identifies several of the alleged trolls in the book and explains why it is difficult to bring them to justice and how to deal with them.[24] Many Amazon.com reviews of this book appear to be written by neo-Nazis who praise Garrison's extremist rhetoric and violent militancy, almost making him appear like a supervillain. However, these reviews are actually written by online trolls and are completely false.