The synagogue was built in 1701 and is affiliated to London's historic Spanish and Portuguese Jewish community.[1] It is a Grade I listed building. It is the only synagogue in Europe which has held regular services continuously for more than 300 years. 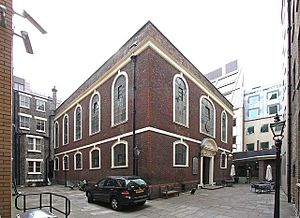 Exterior of the synagogue

Services at a small synagogue in Creechurch Lane date to at least October 1663, when it was visited on the festival of Simchat Torah, by the diarist Samuel Pepys, who recorded his impressions of the service. In 1698 Rabbi David Nieto took spiritual charge of the congregation of Spanish and Portuguese Jews (also called Sephardim)[2]

A considerable influx of Jews made it necessary to obtain more commodious quarters. Accordingly, a committee was appointed, consisting of António Gomes Serra, Menasseh Mendes, Alfonso Rodrigues, Manuel Nunez Miranda, Andrea Lopez, and Pontaleão Rodriguez. It investigated matters for nearly a year, and on 12 February 1699, signed a contract with Joseph Avis, a Quaker, for the construction of a building to cost £2,650. According to legend, Avis declined to collect his full fee, on the ground that it was wrong to profit from building a house of God. Also unsubstantiated is the story that a timber was donated by the then Princess Anne for the roof of the synagogue.[3] On 24 June 1699, the committee leased from Sir Thomas and Lady Pointz (also known as Littleton) a tract of land at Plough Yard, in Bevis Marks, for 61 years, with the option of renewal for a further 38 years, at £120 a year.

The structure was completed and dedicated in September 1701.[4] The interior decor and furnishing and layout of the synagogue reflect the influence of the great Amsterdam Synagogue of 1677. The roof was destroyed by fire in 1738 and repaired in 1749. During the London Blitz the synagogue's silver, records and fittings were removed to a place of safety; the synagogue suffered only minor damage. The synagogue suffered some collateral damage from the IRA in 1992 and the 1993 Bishopsgate bombing, but this was restored.[5] The essential original structure of the building thus remains today.

In 1747 Benjamin Mendes da Costa bought the lease of the ground on which the building stood, and presented it to the congregation, vesting the deeds in the names of a committee consisting of Gabriel Lopez de Britto, David Aboab Ozorio, Moses Gomes Serra, David Franco, Joseph Jessurun Rodriguez, and Moses Mendes da Costa.

For Sephardic Jews, the Bevis Marks Synagogue was a religious centre of the Anglo-Jewish world for more than a century, and served as a clearing-house for congregational and individual Jewish problems all over the world. These included the appeal of Jews in Jamaica for a reduction in taxation (1736), the internecine quarrel among Jews in Barbados (1753), and the aiding of seven-year-old Moses de Paz, who escaped from Gibraltar in 1777 to avoid a forced conversion to Christianity. Through the actions of the leading synagogue member Moses Montefiore the synagogue was also involved in the 19th century in the Damascus Affair and the Mortara Affair, two events provoking much international discussion of Jewish rights and reputation.[6] It was part of the inspiration for Jacob Sassoon's Ohel Rachel Synagogue in Shanghai,[7] the largest synagogue in the Far East.[8]

Amongst the Chief Rabbis of the Anglo-Sephardic Community (Hahams) who have served at Bevis Marks have been Daniel Nieto (1654–1728) and Moses Gaster (1856–1939).[9] Amongst other notable members of the synagogue's congregation have been the boxer Daniel Mendoza, and Isaac D'Israeli (father of Benjamin Disraeli), who resigned from the congregation after an argument over synagogue fees.[10]

Expansion of the community

As the Spanish and Portuguese Jewish community grew and moved out of the City and East End of London to the West End and the suburbs, members demanded a new synagogue to be built in the West End. When leadership refused this, some members formed a breakaway synagogue in Burton Street, which later became the West London Synagogue. In 1853 a branch synagogue was opened in Wigmore Street; in 1866 this moved to Bryanston Street, Bayswater. Attendance at Bevis Marks declined so much that in 1886 a move to sell the site was contemplated; a "Bevis Marks Anti-Demolition League" was founded, under the auspices of H. Guedalla and A. H. Newman, and the proposed move was abandoned.

In 1896 a new synagogue was built at Lauderdale Road, Maida Vale, as successor to the Bryanston Street synagogue.

Events in the twentieth century

On 10 April 1992, the synagogue was affected by an IRA terrorist attack on the Baltic Exchange. The bomb was contained in a large white truck and consisted of a fertilizer device wrapped with a detonation cord made from Semtex.

The Chairman of Buildings for the Spanish & Portuguese Congregation, donning a hard hat and escorted by police, was one of the first people to enter the cordoned area of streets to examine the damage to the synagogue. He, with the agreement of the insurance company, put in place a programme of repair which lasted fifteen weeks, but enabled the building to be restored before his daughter's wedding.[11]

The following year the synagogue was also affected by an attack on Bishops Gate. Nearly £200,000 was raised by donation to help with the renovations to return it to its former glory.[12] 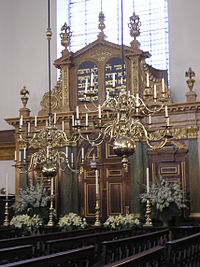 A prominent feature of the synagogue is the Renaissance-style ark (containing the Torah scrolls) located at the centre of the Eastern wall of the building. It resembles in design the reredos of the churches of the same period. Painted to look as though it is made of coloured Italian marble, it is in fact made entirely of oak.

Seven hanging brass candelabra symbolise the seven days of the week, the largest of which – hanging in the centre of the synagogue – represents the Sabbath. This central candelabrum was donated by the community of the Great Synagogue of Amsterdam. The candles are still lit today for weddings and the Jewish Festivals. The rest of the year the Synagogue is lit by the electric lights added in 1928. The ner tamid (sanctuary lamp) is of silver and dates from 1876.[13]

The synagogue contains benches running parallel to the side walls and facing inward, leaving two aisles for the procession with the Torah scrolls. In addition, backless benches at the rear of the synagogue, taken from the original synagogue at Creechurch Lane, date from 1657 and are still regularly used.[14]

A number of seats in the synagogue are roped off as they belong or have belonged to notable people within the community. Two seats were reserved for the most senior officials of the congregation's publishing arm, Heshaim. A third seat, fitted with a footstool, (the seat nearest the Ark on the central row of the left half of the benches) is also withheld as it belonged to Moses Montefiore. It is now only ever occupied by very senior dignitaries as a particular honour. In 2001 Prince Charles used the seat during the synagogue's tercentenary service. Prime Minister Tony Blair used it for the service celebrating the 350th anniversary of the re-settlement of the Jews in Great Britain in 2006, when the Chief Rabbi of the United Synagogue Sir Jonathan Sacks and the Lord Mayor of London were also present.[15]

The synagogue retains notable historical records, including community circumcision and marriage records dating back to 1679.[5] 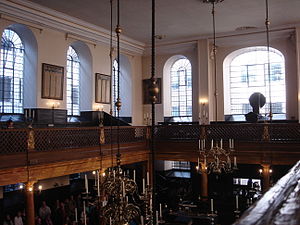 On Friday 13 November 1998, Lord Levene of Portsoken became the eighth Jewish Lord Mayor of London. An Ashkenazi Jew by birth, Lord Levene's first public act was to walk, with a retinue, from his official residence (Mansion House) to Bevis Marks Synagogue, for the Sabbath Eve service. This was repeated on Friday 12 November 2010 by the then Lord Mayor Michael Bear.

Today the Spanish and Portuguese descendant community in London operates three synagogues; Bevis Marks, Lauderdale Road, (which is the community's administrative headquarters), and a smaller synagogue in Wembley. The community's sheltered housing scheme "Harris Court" and old-age home "Edinburgh House" are also located in Wembley. A number of other Sephardic synagogues in Britain have associated status. Bevis Marks Synagogue remains the flagship synagogue of the British Sephardic Jewish community. Regular services are held and the synagogue is frequently a venue for weddings and other celebrations.