The Bodmin & Wenford Railway (BWR) is a heritage railway, based at Bodmin in Cornwall, England, United Kingdom. It has an interchange with the national rail network at Bodmin Parkway railway station, the southern terminus of the line.

The Great Western Railway opened its branch line from Bodmin Road to Bodmin General 27 May 1887, and on 3 September 1888 a junction line was opened to join with the Bodmin and Wadebridge Railway at which had opened its line from Bodmin North to Wadebridge in 1834. The line closed on 3 October 1983 following the demise of freight traffic from Wenford.

In 1984 the Bodmin Railway Preservation Society was formed, and they held their first open day at Bodmin general two years later. 1987 saw the Cornish Steam locomotive Society move their equipment from Bugle to Bodmin.

A Light Railway Order was granted in 1989 and the following year passenger services recommenced between Bodmin General and Bodmin Road, although by now that station had been renamed "Bodmin Parkway". A new intermediate station known as Colesloggett Halt was brought into use. In 1996 the former junction line was also reopened, with another new station provided as Boscarne Junction.

The stations served are all in or near Bodmin. They are:

On leaving Bodmin parkway, the route first crosses the River Fowey by a five-arch viaduct, and then climbs up towards Bodmin Moor. The one intermediate halt is at Colesloggett Halt, built by the BWR in 1993 to serve a Farm Park (now closed), and provides access to a network of footpaths through the Cardinham Woods, belonging to the Forestry Commission. The trip takes 25 minutes each way.

Upon reaching Bodmin General station, the headquarters of the railway, trains reverse to take the line to Boscarne Junction. This lies on the former London and South Western Railway route to Wadebridge and Padstow, which now forms the Camel Trail alongside the River Camel. The railway has aspirations to extend alongside this foot/cyclepath towards Wadebridge in the future.

The railway is controlled by lower quadrant semaphore signals.[citation needed] Access to the Network Rail mainline at Bodmin is controlled by a lever frame, under the supervision of NR's Lostwithiel signal box. 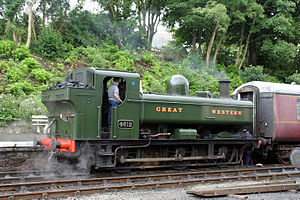 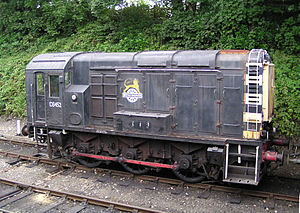 The railway company is currently planning to extend beyond its western terminus at Boscarne Junction towards Wadebridge alongside the Camel Trail. Known as the RailTrail project, phase one would see the railway extended to Nanstallon Halt, phase two to Grogley Halt and phase three to Wadebridge Guineaport.[4]

A separate company (Bodmin & Wadebridge Railway Company) has been set up. It is responsible to the Directors of the Bodmin & Wenford Railway for the promotion and management of all aspects relating to the RailTrail project.[citation needed]

In areas where the width of the trackbed does not allow both a railway and a footpath side-by-side, short diversions are proposed. For example, at Grogley, the Camel Trail could be re-routed along a former "headshunt", which was part of the original railway before it was replaced by a later deviation.

The RailTrail project is viewed by some[4] as somewhat controversial[4] due to the following concerns.

The decision of North Cornwall District Council to support the project was "a close fought battle", won only by the casting vote of Councillor Graham Facks-Martin.[6][7]