Abraham "Bram" Stoker (8 November 1847 – 20 April 1912) was an Irish author, best known today for his 1897 Gothic novel, Dracula. During his lifetime, he was better known as the personal assistant of actor Henry Irving and business manager of the Lyceum Theatre in London, which Irving owned.

Stoker was born on 8 November 1847 at 15 Marino Crescent, Clontarf, on the northside of Dublin, Ireland.[1] His parents were Abraham Stoker (1799–1876), from Dublin, and Charlotte Mathilda Blake Thornley (1818–1901), who was raised in County Sligo.[2] Stoker was the third of seven children, the eldest of whom was Sir Thornley Stoker, 1st Bt.[3] Abraham and Charlotte were members of the Church of Ireland Parish of Clontarf and attended the parish church with their children, who were baptised there.[4]

Stoker was bedridden with an unknown illness until he started school at the age of seven, when he made a complete recovery. Of this time, Stoker wrote, "I was naturally thoughtful, and the leisure of long illness gave opportunity for many thoughts which were fruitful according to their kind in later years." He was educated in a private school run by the Rev. William Woods.[5]

After his recovery, he grew up without further major health issues, even excelling as an athlete (he was named University Athlete) at Trinity College, Dublin, which he attended from 1864 to 1870. He graduated with honours as a B.A. in Mathematics. He was auditor of the College Historical Society ("the Hist") and president of the University Philosophical Society, where his first paper was on "Sensationalism in Fiction and Society".

Stoker became interested in the theatre while a student through a friend, Dr. Maunsell. He became the theatre critic for the Dublin Evening Mail, co-owned by the author of Gothic tales Sheridan Le Fanu. Theatre critics were held in low esteem, but he attracted notice by the quality of his reviews. In December 1876 he gave a favourable review of Henry Irving's Hamlet at the Theatre Royal in Dublin. Irving invited Stoker for dinner at the Shelbourne Hotel where he was staying. They became friends. Stoker also wrote stories, and in 1872 "The Crystal Cup" was published by the London Society, followed by "The Chain of Destiny" in four parts in The Shamrock. In 1876, while a civil servant in Dublin, Stoker wrote a non-fiction book (The Duties of Clerks of Petty Sessions in Ireland, published 1879), which remained a standard work.[5] Furthermore, he possessed an interest in art, and was a founder of the Dublin Sketching Club in 1874.

In 1878 Stoker married Florence Balcombe, daughter of Lieutenant-Colonel James Balcombe of 1 Marino Crescent. She was a celebrated beauty whose former suitor was Oscar Wilde.[6] Stoker had known Wilde from his student days, having proposed him for membership of the university’s Philosophical Society while he was president. Wilde was upset at Florence's decision, but Stoker later resumed the acquaintanceship, and after Wilde's fall visited him on the Continent.[7]

The Stokers moved to London, where Stoker became acting manager and then business manager of Irving's Lyceum Theatre, London, a post he held for 27 years. On 31 December 1879, Bram and Florence's only child was born, a son whom they christened Irving Noel Thornley Stoker. The collaboration with Henry Irving was important for Stoker and through him he became involved in London's high society, where he met James Abbott McNeill Whistler and Sir Arthur Conan Doyle (to whom he was distantly related). Working for Irving, the most famous actor of his time, and managing one of the most successful theatres in London made Stoker a notable if busy man. He was dedicated to Irving and his memoirs show he idolised him. In London Stoker also met Hall Caine, who became one of his closest friends – he dedicated Dracula to him.

In the course of Irving's tours, Stoker travelled the world, although he never visited Eastern Europe, a setting for his most famous novel. Stoker enjoyed the United States, where Irving was popular. With Irving he was invited twice to the White House, and knew William McKinley and Theodore Roosevelt. Stoker set two of his novels there, using Americans as characters, the most notable being Quincey Morris. He also met one of his literary idols, Walt Whitman. 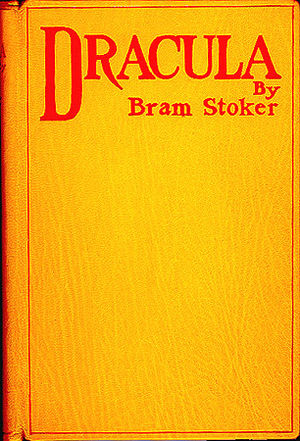 The first edition cover of Dracula 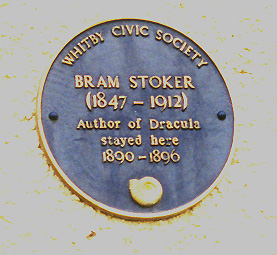 Stoker visited the English town of Whitby in 1890 and that visit is said to be part of the inspiration of his great novel Dracula. While manager for Henry Irving and secretary and director of London's Lyceum Theatre, he began writing novels, beginning with The Snake's Pass in 1890 and Dracula in 1897. During this period, Stoker was part of the literary staff of the The Daily Telegraph in London, and wrote other fiction, including the horror novels The Lady of the Shroud (1909) and The Lair of the White Worm (1911).[8] In 1906, after Irving's death, he published his Personal Reminiscences of Henry Irving, which proved successful,[5] and managed productions at the Prince of Wales Theatre.

Dracula is an epistolary novel, written as a collection of realistic, but completely fictional, diary entries, telegrams, letters, ship's logs, and newspaper clippings, all of which added a level of detailed realism to the story, a skill Stoker had developed as a newspaper writer. At the time of its publication, Dracula was considered a "straightforward horror novel" based on imaginary creations of supernatural life.[8] "It gave form to a universal fantasy . . . and became a part of popular culture."[8]

According to the Encyclopedia of World Biography, Stoker's stories are today included in the categories of "horror fiction", "romanticized Gothic" stories, and "melodrama."[8] They are classified alongside other "works of popular fiction" such as Mary Shelley's Frankenstein,[10]:394 which, according to historian Jules Zanger, also used the "myth-making" and story-telling method of having "multiple narrators" telling the same tale from different perspectives. "'They can't all be lying,' thinks the reader."[11]

The original 541-page manuscript of Dracula was believed to have been lost until it was found in a barn in northwestern Pennsylvania in the early 1980s.[12] It included the typed manuscript with many corrections, and handwritten on the title page was "THE UN-DEAD." The author's name was shown at the bottom as Bram Stoker. Author Robert Latham remarked: "the most famous horror novel ever published, its title changed at the last minute."[10] The manuscript was purchased by Microsoft co-founder Paul Allen.

Stoker's inspirations for the story, in addition to Whitby, may have included a visit to Slains Castle in Aberdeenshire, a visit to the crypts of St. Michan's Church in Dublin and the novella Carmilla by Sheridan Le Fanu.[13]

Stoker's original research notes for the novel are kept by the Rosenbach Museum and Library in Philadelphia, PA. A facsimile edition of the notes was created by Elizabeth Miller and Robert Eighteen-Bisang in 1998. 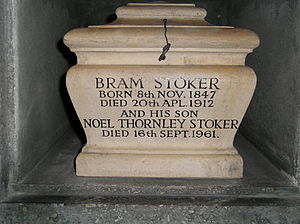 After suffering a number of strokes, Stoker died at No. 26 St George's Square on 20 April 1912.[14] Some biographers attribute the cause of death to tertiary syphilis,[15] others to overwork.[16] He was cremated, and his ashes placed in a display urn at Golders Green Crematorium. After Irving Noel Stoker's death in 1961, his ashes were added to that urn. The original plan had been to keep his parents' ashes together, but after Florence Stoker's death, her ashes were scattered at the Gardens of Rest. Visitors to his urn at Golders Green are escorted to the room as a precaution against vandalism.

Stoker was raised a Protestant in the Church of Ireland. He was a strong supporter of the Liberal Party and took a keen interest in Irish affairs.[5] As a "philosophical home ruler" he supported Home Rule for Ireland brought about by peaceful means. He remained an ardent monarchist who believed Ireland should remain within the British Empire, an entity he saw as a force for good. He was an admirer of Prime Minister William Ewart Gladstone, whom he knew personally, and supported his plans for Ireland.[17]

Stoker believed in progress and took a keen interest in science and science-based medicine. Some Stoker novels, such as The Lady of the Shroud (1909), represent early examples of science fiction. He had a writer's interest in the occult, notably mesmerism, but despised fraud and believed in the superiority of the scientific method over superstition. Stoker counted J. W. Brodie-Innis, a member of the Hermetic Order of the Golden Dawn, among his friends and hired member Pamela Colman Smith as an artist for the Lyceum Theatre, but no evidence suggests that Stoker ever joined the Order himself.[18][19][20]

The short story collection Dracula's Guest and Other Weird Stories was published in 1914 by Stoker's widow Florence Stoker. The first film adaptation of Dracula was released in 1922 and was named Nosferatu. It was directed by F. W. Murnau and starred Max Schreck as Count Orlock. Nosferatu was produced while Florence Stoker, Bram Stoker's widow and literary executrix, was still alive. Represented by the attorneys of the British Incorporated Society of Authors, she eventually sued the filmmakers. Her chief legal complaint was that she had been neither asked for permission for the adaptation nor paid any royalty. The case dragged on for some years, with Mrs. Stoker demanding the destruction of the negative and all prints of the film. The suit was finally resolved in the widow's favour in July 1925. Some copies of the film survived, however, and the film has become well known. The first authorised film version of Dracula did not come about until almost a decade later when Universal Studios released Tod Browning's Dracula starring Bela Lugosi.

Because of the Stokers' frustrating history with Dracula's copyright, a great-grandnephew of Bram Stoker, Canadian writer Dacre Stoker, with encouragement from screenwriter Ian Holt, decided to write "a sequel that bore the Stoker name" to "reestablish creative control over" the original novel. In 2009, Dracula: The Un-Dead was released, written by Dacre Stoker and Ian Holt. Both writers "based [their work] on Bram Stoker's own handwritten notes for characters and plot threads excised from the original edition" along with their own research for the sequel. This also marked Dacre Stoker's writing debut.[21][22]

In Spring 2012, Dacre Stoker, in collaboration with Prof. Elizabeth Miller, presented the "lost" Dublin Journal written by Bram Stoker, which had been kept by his great-grandson Noel Dobbs. Stoker's diary entries shed a light on the issues that concerned him before his London years. A remark about a boy who caught flies in a bottle might be a clue for the later development of the Renfield character in Dracula.[23]

On 8 November 2012, Stoker was honoured with a Google Doodle on Google's homepage commemorating his 165th birthday.[24][25]

An annual festival takes place in Dublin, the birthplace of Bram Stoker, in honour of his literary achievements. The 2014 Bram Stoker Festival, which encompassed literary, film, family, street and outdoor events ran from 24–27 October in and around Dublin City.[26][27] The festival is supported by the Bram Stoker Estate[28] and funded by Dublin City Council and Failte Ireland.