Bruno of Cologne (Cologne c. 1030 – Serra San Bruno 6 October 1101) was the founder of the Carthusian Order, personally founded the order's first two communities. He was a celebrated teacher at Reims, and a close advisor of his former pupil, Pope Urban II.

Bruno was born at Cologne about the year 1030. According to tradition, he belonged to the family of Hartenfaust, or Hardebüst, one of the principal families of the city.[1] Little is known of his early years, except that he studied theology in the present-day French city of Reims before returning to his native land.

His education completed, Bruno returned to Cologne, where he was most likely ordained a priest around 1055, and provided with a canonry at St. Cunibert's. In 1056 Bishop Gervais recalled him to Reims, where the following year he found himself head of the episcopal school, which at the time included the direction of the schools and the oversight of all the educational establishments of the diocese. For eighteen years, from 1057 to 1075, he maintained the prestige which the school of Reims attained under its former masters, Remi of Auxerre, and others.[1]

Bruno led the school for nearly two decades, acquiring an excellent reputation as a philosopher and theologian.[2] Among his students were Eudes of Châtillon, afterwards Pope Urban II, Rangier, Cardinal and Bishop of Reggio, Robert, Bishop of Langres, and a large number of prelates and abbots.

Chancellor of the Diocese of Reims

In 1075, Bruno was appointed chancellor of the Diocese of Reims, which involved him in the daily administration of the diocese. Meanwhile, the pious Bishop Gervais de Château-du-Loir, a friend to Bruno, had been succeeded by Manasses de Gournai, a violent aristocrat with no real vocation for the Church. In 1077, at the urging of Bruno and the clergy at Reims, de Gournai was suspended at a council at Autun. He responded, in typical eleventh century fashion, by having his retainers pull down the houses of his accusers.[3] He confiscated their goods, sold their benefices, and even appealed to the pope. Bruno discreetly avoided the cathedral city until in 1080 a definite sentence, confirmed by popular riot, compelled Manasses to withdraw[2] and take refuge with Emperor Henry IV, the fierce opponent of the ambitious current papacy of Gregory VII.

Refusal to become a Bishop 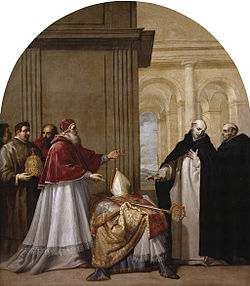 On the verge of being made bishop himself, Bruno instead followed a vow he had made to renounce secular concerns and withdrew, along with two of his friends, Raoul and Fulcius, also canons of Reims.

Bruno's first thought on leaving Reims seems to have been to place himself and his companions under the direction of an eminent solitary, Saint Robert, who had recently (1075) settled at Sèche-Fontaine, near Molesme in the Diocese of Langres, together with a band of other hermits, who were later on (in 1098) to form the Cistercian Order. But he soon found that this was not his vocation. After a short stay he went with six of his companions to Saint Hugh of Châteauneuf, Bishop of Grenoble. The bishop, according to the pious legend, had recently had a vision of these men, under a chaplet of seven stars, and he installed them himself in 1084 in a mountainous and uninhabited spot in the lower Alps of the Dauphiné, in a place named Chartreuse,[3] not far from Grenoble. With St. Bruno were Landuin, Stephen of Bourg, and Stephen of Die, canons of St. Rufus, and Hugh the Chaplain, and two laymen, Andrew and Guerin, who afterwards became the first lay brothers.

They built an oratory with small individual cells at a distance from each other where they lived isolated and in poverty,[3] entirely occupied in prayer and study, for these men had a reputation for learning, and were frequently honored by the visits of St. Hugh who became like one of themselves.

At the time, Bruno's pupil, Eudes of Châtillon, had become pope as Urban II (1088). Resolved to continue the work of reform commenced by Gregory VII, and being obliged to struggle against an antipope Guibert of Ravenna and the Emperor Henry IV, he was in dire need of competent and devoted allies and called his former master to Rome in 1090.[2]

It is difficult to assign the place which Bruno occupied in Rome, or his influence in contemporary events, because it remained entirely hidden and confidential. Lodged in the Lateran with the pope himself, privy to his most private councils, he worked as an advisor but wisely kept in the background, apart from the fiercely partisan rivalries in Rome and within the curia. Shortly after his arrival in Rome, the papal party was forced to evacuate to the south by the arrival of Henry IV with his own antipope in tow.[4]

Bruno did not attend the Council of Clermont, where Urban preached the First Crusade, but seems to have been present at the Council of Benevento (March, 1091). His part in history is effaced.

During the voyage south, the former professor of Reims attracted attention in Reggio Calabria, which had just lost its Archbishop Arnulph in the year 1090. The pope and Roger Borsa, the Norman Duke of Apulia, strongly approved of the election and pressed Bruno to accept it. Bruno sidestepped the offer, which he guided to one of his former pupils nearby at a Benedictine abbey near Salerno. Instead Bruno begged to return again to his solitary life. His intention was to rejoin his brethren in Dauphiné, as a letter addressed to them makes clear. But the will of Urban II kept him in Italy, near the papal court, to which he could be called at need.

The place for his new retreat, chosen in 1091 by Bruno and some followers who had joined him, was in the Diocese of Squillace, in a small forested high valley, where the band constructed a little wooden chapel and cabins. His patron there was Roger I of Sicily, Count of Sicily and Calabria and uncle of the Duke of Apulia, who granted them the lands they occupied, and a close friendship developed. Bruno went to the Guiscard court at Mileto to visit the count in his sickness (1098 and 1101), and to baptize his son Roger (1097), the future King of Sicily. But more often Roger went into retreat with his friends, where he erected a simple house for himself. Through his generosity, the monastery of St. Stephen was built in 1095, near the original hermitage dedicated to the Virgin.[4]

After his death, the Carthusians of Calabria, following a frequent custom of the Middle Ages, dispatched a roll-bearer, a servant of the community laden with a long roll of parchment, hung round his neck, who travelled through Italy, France, Germany, and England, stopping to announce the death of Bruno, and in return, the churches, communities, or chapters inscribed upon his roll, in prose or verse, the expression of their regrets, with promises of prayers. Many of these rolls have been preserved, but few are so extensive or so full of praise as that about St. Bruno. A hundred and seventy-eight witnesses, of whom many had known the deceased, celebrated the extent of his knowledge and the fruitfulness of his instruction. Strangers to him were above all struck by his great knowledge and talents. But his disciples praised his three chief virtues — his great spirit of prayer, extreme mortification, and devotion to the Blessed Virgin.

Both the churches built by him in the desert were dedicated to the Blessed Virgin: Our Lady of Casalibus in Dauphiné and Our Lady Della Torre in Calabria; faithful to his inspirations, the Carthusian Statutes proclaim the Mother of God the first and chief patron of all the houses of the order, whoever may be their particular patron. He is also the eponym for San Bruno Creek in California.

Inscription in the Roman Calendar

Bruno was buried in the little cemetery of the hermitage of Santa Maria. In 1513, his bones were discovered with the epitaph "Haec sunt ossa magistri Brunonis" over them. Since the Carthusian Order maintains a strict observance of humility, Saint Bruno was never formally canonized. He was not included in the Tridentine Calendar, but in the year 1623 Pope Gregory XV included him in the General Roman Calendar for celebration on 6 October.[5]

A writer as well as founder of his order, Saint Bruno composed commentaries on the Psalms and on the Epistles of Saint Paul. Two letters of his also remain, his profession of faith, and a short elegy on contempt for the world which shows that he cultivated poetry. St Bruno's "Commentaries" reveal that he knew a little Hebrew and Greek; he was familiar with the Fathers, especially Saint Augustine and Saint Ambrose. "His style," said Dom Rivet, "is concise, clear, nervous and simple, and his Latin as good as could be expected of that century: it would be difficult to find a composition of this kind at once more solid and more luminous, more concise and more clear."

In Catholic art, Saint Bruno can be recognized by a skull that he holds and contemplates, with a book and a cross. He may be crowned with a halo of seven stars; or with a roll bearing the device "O Bonitas."