A cabbage roll is a dish consisting of cooked cabbage leaves wrapped around a variety of fillings. It is common to the ethnic cuisines of the Balkans, Central, Northern, and Eastern Europe, as well as West Asia.

Meat fillings are traditional in Europe, often beef, lamb, or pork seasoned with garlic, onion, and spices. Grains such as rice and barley, eggs, mushrooms, and vegetables are often included. Pickled cabbage leaves are often used for wrapping, particularly in Southeastern Europe. In Asia, seafoods, tofu, and shiitake mushroom may also be used. Chinese cabbage is often used as a wrapping.

Cabbage leaves are stuffed with the filling which are then baked, simmered, or steamed in a covered pot and generally eaten warm, often accompanied with a sauce. The sauce varies widely by cuisine. Always in Sweden and sometimes in Finland, stuffed cabbage is served with lingonberry jam, which is both sweet and tart. In Eastern Europe, tomato-based sauces or plain sour cream are typical. In Lebanon, it is a popular plate, where the cabbage is stuffed with rice and minced meat and only rolled to the size of cigar. It is usually served with a side of yogurt and a type of lemon and olive oil vinaigrette seasoned with garlic and dried mint.

Popular among European Jews, and traditionally served on Simchat Torah, stuffed cabbage is described by Gil Marks to have entered Jewish cooking some 2,000 years ago.[1] Recipes vary among Jewish communities depending on region; Romanians and northern Poles prefer a savory sauce, while Jews from Galicia and Ukraine favor sweet-and-sour, for example.[2]

Serbia, Bosnia and Herzegovina and Croatia

Cabbage rolls are a staple diet of the population in Serbia and Croatia. Stuffed cabbage with smoked ground pork is a favorite at Christmas. In Croatia, sarma is typically made with sauerkraut leaves.

Stuffed cabbage rolls are the epitome of Polish nourishment. Pork and beef mixed with rice or barley are nestled in a cabbage leaf and cooked in the oven or on the stove until tender.

Poles call them gołąbki, which literally means "little pigeons." For Czechs and Slovaks, it's holubky, while Serbs and Croatians refer to them as sarma. Usually, the sauce is what sets them apart. There's also a less popular version called 'leniwe gołąbki' (lazy cabbage rolls) in which ingredients are chopped, combined together and baked or fried.

Sarmale are Romanian stuffed cabbage rolls traditionally served on Christmas and New Year's Eve but also served throughout the year at weddings, baptism parties, and other large celebrations. Ground pork is mixed with sauteed caramelized onions and rice stuffed in a cabbage leaf, pickled sauerkraut leaf or grape leaf. For flavor, they usually consist of layers with smoked pork fat, smoked ribs, or smoked sausage.

The Romanian Sarmale is a versatile dish, and the best way of consuming is reheated the next day. The flavor is different with an enhanced flavor. It can be prepared with a tomato base, dill base or combination. Sweet shredded cabbage layers in between the rolls of pickled cabbage leaves or sauerkraut layers in between of sweet cabbage leaves. The taste is significant different but still a great dish.

Typical Ukrainian cabbage rolls can be made from either pickled or parboiled cabbage leaves. Fillings traditionally contain rice only, since the typical peasant diet was largely vegetarian due to the higher cost of meat. Occasionally, the rice filling is mixed with small amounts of meat. Other recipes call for cooked kasha and chopped wild mushrooms or, more recently, combinations of whole grains and root vegetables. Some modern recipes call for tofu or textured vegetable protein instead of meat. The finished rolls may be simmered in thinned tomato juice, beef stock, vegetable stock, or even miso broth.[4]

Modern day "golubtsi" (Stuffed Cabbage Leaves) in Ukraine and Russia are usually stuffed with a mixture of meats, rice and vegetables. The cabbage leaf is slightly steamed so that it would stuff easier. It is made with a souse and typically served with sour cream. Usually when one serves Stuffed Cabbage Leaves in those geographical regions, it implies (meat-meatball stuffing). The recipe is easily adjusted to nutritional requirements or product availability.

The Russian version of cabbage rolls usually consists of mincemeat mixed with cooked rice or buckwheat wrapped in cabbage leaves and stewed in a mixture of sour cream and tomato sauce. In order to save time there is another variation of that dish called "lenivye golubtsy" (lazy cabbage rolls). In that case, the cabbage is chopped and mixed with mincemeat and rice so there is no need to wrap every meatball in a cabbage leaf.[5] 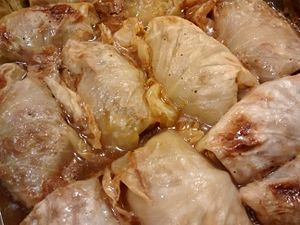 Kåldolmar are Swedish cabbage rolls filled with minced pork and in some cases rice. They are usually eaten with boiled potatoes, gravy, and lingonberry jam. Kåldolmar are also popular in Denmark and in Finland, where they are known in Finnish as kaalikääryle (plural kaalikääryleet).[6]

The dish is considered a variety of the dolma, common in Eastern Mediterranean countries. After losing the Battle of Poltava in 1709 Charles XII of Sweden fled to the city of Bender, in Moldavia, then controlled by his ally, the Sultan of the Ottoman Empire. Charles XII spent more than five years in the Ottoman Empire, trying to convince the Sultan to help him defeat the Russians. When he finally returned to Sweden in 1715, he was followed by some of the Ottoman creditors from whom he had borrowed money from to finance his wars. The creditors lived in Stockholm until 1732, and during this time it is most likely that the dolma was introduced in Sweden.

The first known Swedish recipe for Oriental dolmas was included in a famous Swedish cookbook written by Cajsa Warg, in 1765. At the end of the recipe, Ms Warg suggested that those who could not afford vine leaves could use preboiled cabbage leaves in their place.

In Sweden "Kåldolmens dag" (Day of the Cabbage Roll) is celebrated on 30 November, the death day of Charles XII of Sweden and since the 1930s a day marked by Nazi manifestations, with the purpose stated by its initiators to hail the multifaceted Swedish cultural heritage involving national symbols with immigrant background. It is arranged by "Kåldolmens vänner" (Friends of the Cabbage Roll).

Nowadays, frozen 'Kåldolmar' are sold in most big food stores.

The traditional Hungarian cabbage roll (töltött káposzta) can be made from pickled cabbage leaves, filled with minced pork meat. The Hungarian version often contains minced pepper (paprika) and is served with sour cream on top. Hungarians serve this food during the periods of time near Christmas and New Year's, but stuffed cabbage also belongs to the traditional pig slaughter.

In Egyptian cuisine, cabbage rolls are called محشي كرمب, pronounced maḥshī kromb or maḥshī koronb (as Standard Arabic [m] often turns to [n] in proximity to [b] in Egyptian Arabic), literally translating to "stuffed cabbage". The leaves are fresh and commonly cut into smaller pieces and partially pre-cooked. The most common filling is a mixture of rice, onion, tomato, herbs, and spices (most typically including mint, dill, and cumin); meat is rarely used in Egyptian stuffed cabbage. The rolls are arranged in a pot and boiled in broth or tomato-based sauce, also including the herbs and spices.[7]

In regions heavily influenced by Polish immigrants, such as Chicago which claims the largest Polish population outside of Poland, northern Pennsylvania, Southwestern Pennsylvania, the southern tier of New York, and northeastern Ohio, the term usually refers instead to stuffed cabbage rolls, such as the Polish gołąbki. The dish was mentioned in the 1