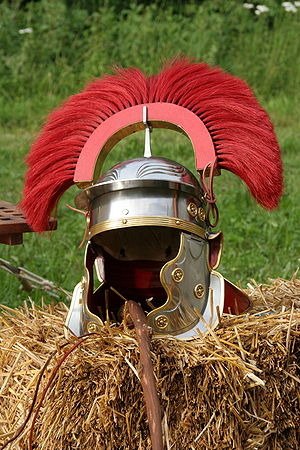 Modern reconstruction of a centurion helmet, first century. Notice the embossed eyebrows and the circular brass bosses typical of the Imperial Gallic helmets.

A galea was a Roman soldier's helmet. Some gladiators, myrmillones, also wore a bronze galea with a face mask and a decoration, often a fish on its crest.[1] The exact form or design of the helmet varied significantly over time, between differing unit types, and also between individual examples - pre-industrial production was by hand – so it is not certain to what degree there was any standardization even under the Roman Empire.

Originally, Roman helmets were influenced by the neighboring Etruscans, people who utilised the "Nasua" type helmets. The Greeks in the south also influenced Roman design in the early history of Rome. For instance, the ancestor of the Chalcidian helmet, the Attic helmet, was widely used by officers until the end of the empire.[2] Lastly, the Gauls were the peoples who most impacted the design of the Roman helmet hence the popular "Imperial Gallic" type helmets. In addition to this, it is commonly thought that the Gauls also introduced chainmail to the Romans.[3]

The primary evidence is scattered archaeological finds, which are often damaged or incomplete. There are similarities of form and function between them.

H. Russell Robinson in his book The Armour of Imperial Rome, published in 1975, classified into broad divisions the various forms of helmets that were found. He classified four main types of helmets for heavy infantry (with subcategories named with letters) and 30 different types of cheek guards.

Helmets used by gladiators were quite different from military versions.

Some of the helmets used by legionaries had a crest holder.[4] The crests were usually made of plumes or horse hair. While they are usually shown in red they probably occurred in other colours, like yellow, purple and black, and possibly in combinations of these colours such as alternating yellow and black.

There is some evidence (Vegetius writings and some sculptures) that legionaries had their crests mounted longitudinally and centurions had them mounted transversely. Crests may have been worn at all times by centurions in the early Empire, including during battle, but legionaries, and centurions during other periods, probably wore crests only occasionally.