"Chinese Taipei" is the name for the Republic of China (ROC) agreed upon in the Nagoya Resolution whereby the ROC and the People's Republic of China recognize each other when it comes to the activities of the International Olympic Committee. It has been used by the ROC as the basis when participating in various international organizations and events, including the Olympics, Miss Earth, Paralympics, Asian Games, Asian Para Games, Universiade and FIFA World Cup.

The term is deliberately ambiguous. To the PRC "Chinese Taipei" is ambiguous about the political status or sovereignty of the ROC/Taiwan; to the ROC it is a more inclusive term than just "Taiwan" (which is to the ROC just one part of China, which it, similarly to the PRC, claims to be the rightful government of the nation in its entirety, and to the PRC the use of "Taiwan" as a national name is associated with independence of the area from the PRC) and "Taiwan China" might be construed as a subordinate area to the PRC.[1] 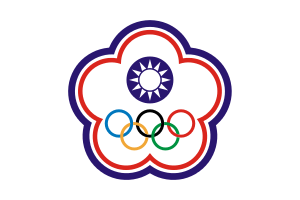 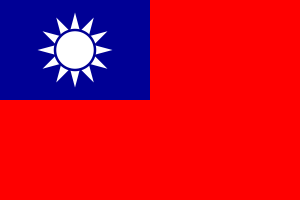 Flag of the Republic of China, origin of the sun symbol used in Olympic and other "Chinese Taipei" flags 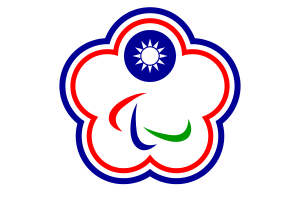 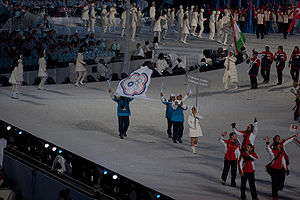 The increased official recognition of the People's Republic of China (PRC) in international activities, such as when accorded recognition in 1971 by the United Nations, instead of that accorded previously to the Republic of China (ROC), saw previously existing diplomatic relations transfer from Taipei to Beijing.[2] The ROC needed to come to a beneficial conclusion to how it would be referred when there was in the same forum participation by the PRC.[citation needed]

The majority view of the ROC leadership at the time was that they did not want to change, "Taiwan" might imply without China or Chinese being in the name subordination to the PRC, did not represent all the regions/islands of the ROC and did not give the ROC an opportunity to assert when wanted a claim to territory outside of the ROC.[1]

Taiwan's own government, the ROC government under the Kuomintang (KMT), rejected the designation of "Taiwan, China" on the grounds that this would imply subordination to the PRC.[1] However, it also refused the names "Taiwan" and "Formosa (simplified Chinese: 福尔摩沙; traditional Chinese: 福爾摩沙)" as a means of reasserting both its claim as the only legitimate government of all of China, and its uncompromising rejection of Taiwan independence. Instead, deriving from the name of its capital city, the ROC government finally formulated the name “Chinese Taipei,” instead of accepting the offer of “Taiwan,” because “Chinese Taipei” signified an uncertain boundary that could exceed the ROC’s actual territory of control of Taiwan, Penghu, Kinmen and Matsu, whenever the ROC government wished to assert it. It regarded the term Chinese Taipei as both acceptably neutral and hopeful of assent from other interested parties. Its proposal found agreement. Beijing accepted the compromise position that the ROC Olympic Committee could be named the "Chinese Taipei Olympic Committee". [1]

In April 1979, in a plenary session of the IOC, He Zhenliang, a representative of the PRC, stated:

The name "Chinese Taipei" was formally accepted by the Government of the Republic of China in 1981.[7][8] A flag bearing the emblem of its Olympic Committee against a white background as the Chinese Taipei Olympic flag was confirmed in January 1981.[4] The agreement was signed on March 23 in Lausanne by Shen Chia-ming, the President of Chinese Taipei Olympic Committee, and Juan Antonio Samaranch, the President of the IOC. In 1983, National Flag Anthem of the Republic of China was chosen as the anthem of the Chinese Taipei delegation. The Republic of China has competed under this flag and name exclusively at each Games since the 1984 Winter Olympics, as well as at the Paralympics and at other international events (with the Olympic rings replaced by a symbol appropriate to the event).

Both the Republic of China (ROC) and the People's Republic of China (PRC) agree to use the English name "Chinese Taipei". This is possible because of the ambiguity of the English word "Chinese", which may mean either the state or the culture. In 1979, the International Olympic Committee passed a resolution in Nagoya, Japan, restoring the rights of the Chinese Olympic Committee within the IOC, meanwhile renaming the Taipei-based Olympic Committee "Chinese Taipei Olympic Committee". Since then, and until 1989 the PRC translated "Chinese Taipei" as "Zhongguo Taipei" (simplified chinese: 中国台北, traditional chinese: 中國臺北, hanyu pinyin: Zhōngguó Táiběi), similar to "Zhongguo Hong Kong", connoting that Taipei is a part of the Chinese state. By contrast, the Republic of China government translated it as "Zhonghua Taipei" (traditional chinese: 中華台北 or 中華臺北, Hanyu Pinyin: Zhōnghuá Táiběi) in Chinese, which references the term "China" as the cultural or ethnic entity, rather than the state. In 1981 the former Republic of China Olympic Committee confirmed its acceptance of the Nagoya resolution, but translated "Chinese Taipei" to "Zhonghua Taipei". In 1989, the two Olympic committees signed a pact in Hong Kong, clearly defining the use of "Zhonghua Taipei".[9] The PRC had been observing the Hong Kong pact and using "Zhonghua Taipei" in stipulated areas ever since, but on other occasions, the version of "Zhongguo Taipei" was still in use following past practice, especially in official media references.[10] In the London 2012 Olympic Games opening ceremony, when each country's team proceeds in alphabetical order in English (the host country's language), the Chinese Taipei (TPE) team did not follow China (CHN), but instead took a place in the procession as if its name were "Taipei" or Taiwan, following Syria and preceding Tajikistan instead. In Beijing 2008 it followed Japan and preceded the Central African Republic.[11] This ordering was based on the stroke number and order of each team's name in simplified Chinese, the official script in the PRC.

Other East Asian nations have also had to make unique translation decisions. In Japan, the PRC is referred to by its official Japanese name Chūka Jinmin Kyōwakoku (中華人民共和国), but an English transliteration, Chainiizu Taipei (チャイニーズタイペイ), is used for Chinese Taipei.

Use of the name 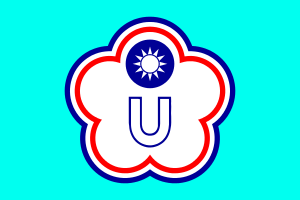 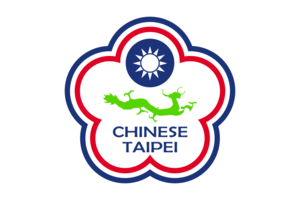 In the Miss World 1998, the government of the People's Republic of China pressured the Miss World Organization to rename Miss Republic of China 1998 to "Miss Chinese Taipei"; it has been competing ever since under that designation.[19] The same happened in 2000, but with the Miss Universe Organization. Three years later at the Miss Universe pageant in Panama, the first official Miss China and Miss Taiwan competed alongside each other for the first time in history, prompting the PRC government to again demand that Miss Taiwan assume the title "Miss Chinese Taipei". The contestant in question, Chen Szu-yu, was famously photographed tearfully holding her two sashes.[20][21] Today, neither Miss Universe nor Miss World, the two largest pageant contests in the world, allow Taiwan's entrants to compete under the Taiwan label. In 2005, the third largest pageant contest, Miss Earth, initially allowed beauty contestant Li Fan Lin to compete as "Miss Taiwan"; a week into the pageant, however, her sash was updated to "Taiwan ROC". In 2008, the official name for the ROC, was changed to "Chinese Taipei".[22]

The title "Chinese Taipei" leads some people to believe that "Taipei" is a country. During the 2004 Summer Olympics in Athens, while Chinese and Taiwanese news channels referred to the team as Chinese Taipei, most foreign outlets simply called the team Taiwan.[23] For sporting events, the ROC team is abbreviated in Taiwan as the Zhonghua Team (中華隊; Zhonghua being a more cultural rather than political variation of the term China), which, in effect, labels it the "Chinese Team".

Starting around the time of the 2004 Summer Olympics, there has been a movement in Taiwan to change all media references to the team to the "Taiwanese Team", and the mainstream Taiwan Television (TTV) is one of the first Taiwanese media outlets to do so. Such usage remains relatively rare, however, and other cable TV channels currently refer to the ROC as the Zhonghua Team and the PRC as the Zhongguo Team, the China team or the mainland China team. 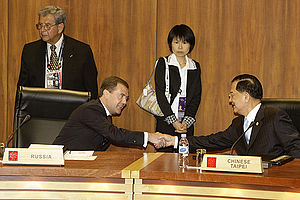 ROC participating as Chinese Taipei in 2008 APEC Summit in Peru

Other alternative references to the Republic of China

References used in the international context to refer to the Republic of China or Taiwan differ according to the type of the organization.

The World Trade Organization officially uses "Separate Customs Territory of Taiwan, Penghu, Kinmen, and Matsu" [24] for the Republic of China, but "Chinese Taipei" is frequently used in official documents and elsewhere.[25]

International organizations in which the PRC participates generally do not recognize Taiwan or allow its membership. The ROC is recognized by 21 UN member states and the Holy See. Thus, for example, whenever the United Nations makes reference to Taiwan, which does not appear on its member countries list,[26] it uses the designation "Taiwan, Province of China", and organizations that follow UN standards usually do the same, such as the International Organization for Standardization in its listing of ISO 3166-1 country codes. Certain web-based postal address programs also label the country designation name for Taiwan as "Taiwan, Province of China". Inter-governmental organizations use a variety of terms to designate Taiwan. 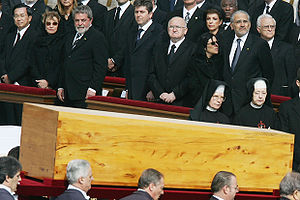 President Chen Shui-bian (far left) who attended the funeral of Pope John Paul II was seated in the first row in French alphabetical order beside the then first lady and president of Brazil.

Some non-governmental organizations which the PRC does not participate in continue to use "China" or the "Republic of China". The World Organization of the Scout Movement is one of few international organizations that continue to use the name of "Republic of China", and the ROC affiliate as the Scouts of China. This is because such Scouting in Mainland China is very limited or not really active.[27] Likewise, Freemasonry is outlawed in the PRC and thus the Grand Lodge of China is based in Taiwan.

Countries that maintain diplomatic relations with Taiwan, especially the ROC's older diplomatic affiliates, also refer to the ROC as "China" on occasion; for example, during the funeral of Pope John Paul II, the President of the Republic of China Chen Shui-bian was seated as part of the French alphabetical seating arrangement as the head of state of "Chine" between the first lady of Brazil, and the president of Cameroon.

Taiwan is technically categorized in the United Nations population projections as ‘Other non-specified areas’ within East Asia.[28][29]