The 1964 Summer Olympics, officially known as the Games of the XVIII Olympiad (第十八回オリンピック競技大会, Dai Jūhachi-kai Orinpikku Kyōgi Taikai), was an international multi-sport event held in Tokyo, Japan, from October 10 to 24, 1964. Tokyo had been awarded the organization of the 1940 Summer Olympics, but this honor was subsequently passed to Helsinki because of Japan's invasion of China, before ultimately being canceled because of World War II.

The 1964 Summer Games were the first Olympics held in Asia, and the first time South Africa was barred from taking part due to its apartheid system in sports.[1][2] (South Africa was, however, allowed to compete at the 1964 Summer Paralympics, also held in Tokyo, where it made its Paralympic Games debut.)[3] Tokyo was chosen as the host city during the 55th IOC Session in West Germany, on May 26, 1959.

These games were also the first to be telecast internationally without the need for tapes to be flown overseas as they were for the 1960 Olympics four years earlier. The games were telecast to the United States using Syncom 3, the first geostationary communication satellite, and from there to Europe using Relay 1.[4] These were also the first Olympic Games to have color telecasts (partially). Certain events like the sumo wrestling and judo matches, sports huge in Japan, were tried out using Toshiba's new color transmission system, but only for the domestic market. History surrounding the 1964 Olympics was chronicled in the 1965 documentary film Tokyo Olympiad, directed by Kon Ichikawa.

The games were scheduled for mid-October to avoid the city's midsummer heat and humidity and the September typhoon season.[5] The previous Olympics in Rome in 1960 started in late August and experienced hot weather. The following games in 1968 in Mexico City also began in October.

Tokyo won the rights to the Games on May 26, 1959, at the 55th IOC Session in Munich, West Germany, over bids from Detroit, Brussels and Vienna.[6]

Toronto was an early bidder again in 1964 after the fail attempt for 1960 and failed to make the final round.[7] 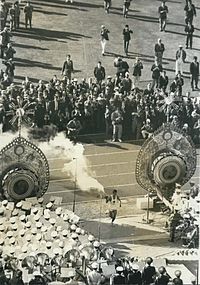 The 1964 Summer Olympic programme featured 163 events in the following 19 sports:

Note: In the Japan Olympic Committee report, sailing is listed as "yachting".[10]

All dates are in Japan Standard Time (UTC+9)

These are the top ten nations that won medals at the 1964 Games.

Number of athletes per country

A total of 93 nations were represented at the 1964 Games. Sixteen nations made their first Olympic appearance in Tokyo: Algeria, Cameroon, Chad, Congo, Côte d'Ivoire (as Ivory Coast), Dominican Republic, Libya (but it did not compete), Madagascar, Malaysia, Mali, Mongolia, Nepal, Niger, Northern Rhodesia (which achieved full independence as Zambia on the same day as the closing ceremony), Senegal, and Tanzania (as Tanganyika). Athletes from East Germany and West Germany competed together as the United Team of Germany from 1956 to 1964. Supporting the People's Republic of China (Mainland China), Indonesia was banned for this Olympic Games, due to its objection to Taiwanese participation under the name "China" 1962 Asian Games. 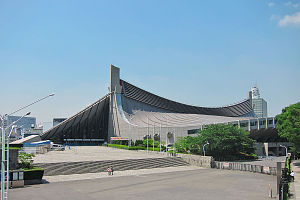 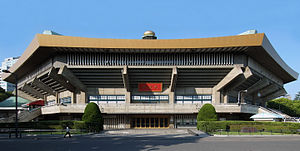 The start of operations for the first Japanese "bullet train" (the Tokaido Shinkansen) between Tokyo Station and Shin-Ōsaka Station was scheduled to coincide with the Olympic games. The first regularly scheduled train ran on October 1, 1964, just 9 days before the opening of the games, transporting passengers 515 kilometers (320 mi) in about 4 hours, and connecting the three major metropolitan areas of Tokyo, Nagoya, and Osaka.

Some already-planned upgrades to both highways and commuter rail lines were rescheduled for completion in time for these games. Of the 8 main expressways approved by the Tokyo Metropolitan Government in 1959, No. 1, No. 4 and a portion of No. 2 and No. 3 were completed for the games. Two subway lines totaling 22 kilometers (14 mi) were also completed in time for the games, and the port of Tokyo facilities were expanded to handle the anticipated traffic.[17]

The 1964 Summer Olympics in Tokyo celebrated Japan's progress and reemergence on the world stage. The new Japan was no longer a wartime enemy, but a peaceful country that threatened no one, and this transformation was accomplished in fewer than 20 years.[18]

Although Japan's foreign policy was closely linked to the United States during the Cold War, the city of Tokyo hosted the 1964 Summer Olympics in the spirit of peaceful engagement with the entire international community, including the Communist states. The goals were to demonstrate to the world that Japan had fully recovered from the war, had disavowed imperialism and militarism, welcomed high-caliber sports, and sought to engage the peoples of the world on a grassroots level. Sports were kept entirely separate from politics. The event proved a great success for the city and for Japan as a whole, with no untoward incidents. Japan's foreign-policy was expanded to include sports diplomacy as the nation sent teams to international competitions across the globe.[19]

To host such a major event, Tokyo's infrastructure needed to be modernized in time for large numbers of expected tourists. Enormous energy and expense was devoted to upgrading the city's physical infrastructure, including new buildings, highways, stadiums, hotels, airports and trains. There was a new satellite to facilitate live international broadcast. Multiple train and subway lines, a large highway building project, and the Tokaido Shinkansen, the fastest train in the world, were completed. Haneda International Airport and the Port of Tokyo were modernized. International satellite broadcasting was initiated, and Japan was now connected to the world with a new undersea communications cable.[16] The YS-11, a commercial turboprop plane developed in Japan, was used to transport the Olympic Flame within Japan.[20] For swimming, a new timing system started the clock by the sound of the starter gun and stopped it with touchpads. The photo finish using a photograph with lines on it was introduced to determine the results of sprints. All of this demonstrated that Japan was now part of the first world and a technological leader, and at the same time demonstrated how other countries might modernize.[18] In preparation for the games, 200,000 stray cats and dogs were rounded-up and euthanized.[21]

Unfortunately, however, the construction projects resulted in some environmental damage, forced relocations for some residents, and loss of some industries. In addition, corruption by politicians and construction companies resulted in cost overruns and some shoddy work.[21]

Although public opinion about the Olympics in Japan had initially been split, by the time the games started almost everyone was behind them. The broadcast of the opening ceremony was watched by over 70% of the viewing public, and the women's volleyball team's gold medal match was watched by over 80%.[18]

As with many other Olympics, observers later stated that 1964 Olympic preparation and construction projects had had a negative effect on the environment and lower income people.[22]

The Cary Grant film Walk, Don't Run was filmed during the Tokyo Olympics, and set in Tokyo during the Olympics. A message at the beginning of the film thanks the Japanese Government and Tokyo Police for putting up with them filming in crowded Tokyo.

The Studio Ghibli film From Up on Poppy Hill takes place one year before the Tokyo Olympics.

North Korea withdrew its athletes from Japan just before the beginning of the Olympics when the IOC refused the athletes who participated in the GANEFO (Games of the New Emerging Forces) which was held in Jakarta, Indonesia. Indonesia and China also did not attend the 1964 Summer Olympics due to GANEFO issues.