From Infogalactic: the planetary knowledge core
(Redirected from Council of Rheims)
Jump to: navigation, search

Reims, located in the north-east of modern France, hosted several councils or synods in the Roman Catholic Church. These councils did not universally represent the church and are not counted among the official Ecumenical Councils. 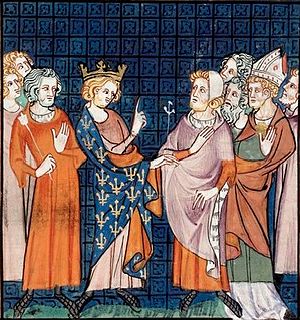 Arnulf, Archbishop of Reims at the Council of Reim, 991

A council, usually called the Synod of St-Basle, was convoked at Reims by King Hugues Capet, assisted by Gerbert of Aurillac, later Pope Sylvester II, to consider the case of Arnulf, Archbishop of Reims, illegitimate son of the late King Lothair. Arnulf was accused of conspiring with his uncle, Charles, Duke of Lower Lorraine, against Hugh Capet. He was duly deposed by the council, and Gerbert appointed in his place. This was done without the approval of Pope John XV, who refused to accept either Arnulf's removal or Gerbert's appointment. The matter dragged on until 995 when Arnulf was restored, and was only completely resolved by Pope Gregory V in 997.[1]

In 1049 Pope Leo IX was invited to be present at the consecration of the church of Abbey of Saint-Remi at Reims. He accepted the invitation and announced that he would at the same time hold a council. This irritated King Henry I of France, since it was generally held that no pope could hold a council in Kingdom of France without first consulting the king, which Leo IX had neglected to do. Consequently, in order to frustrate Leo IX, Henry I ordered all of his vassals to attend a feudal levy at the very time that the council was to be held. This placed the bishops and abbots in France in a very difficult position: they were ordered by Leo IX to attend the council; they were ordered by Henry I to attend the levy. Henry I hoped that his action would prevent the holding of the council, but Leo IX went on with his preparations without paying any attention to Henry I's act. The council was held at the appointed time, and in addition to churchmen from other lands about one-third of the bishops and abbots from the king's territory attended. Those who were absent with Henry I were excommunicated by Leo IX. Then Leo IX took up cases of simony and other ecclesiastical crimes which were reported. Several of those who were present at the council and held high offices in the church were accused of very serious offenses. Leo IX did not push any of them to an extreme, even when the guilt seemed definitely known, but adjourned all of the cases to his own court at Rome. Leo IX acted in the same way with regard to the accusations made against the great nobles. By this policy Leo IX hoped to have the authority of the papacy fully recognized. He was able to accomplish so much because of the weakness of the French monarchy. Leo IX was aided by Henry III, Holy Roman Emperor, in other attempts at reform, with whom he worked apparently in complete concord. Leo IX died in 1054 without having an opportunity to see the full effect of his act which had done so much to strengthen the power of the papacy.[2]

Three canons of this council were legislated about simony.[3] Hugo of Breteuil, bishop of Langres, was accused of simony and extortion, fled the proceedings, was deposed, and excommunicated.[4][5] According to Eamon Duffy, "In one week, Leo had asserted papal authority, as it had never been asserted before".

The Council excommunicated Geoffrey II, Count of Anjou, for the imprisonment of Gervais de Château-du-Loir, bishop of Le Mans.[6]