From Infogalactic: the planetary knowledge core
Jump to: navigation, search
This article is about Crispus Attucks. For other uses, see Crispus Attucks (disambiguation).

Crispus Attucks (c.1723—March 5, 1770) was the first casualty of the Boston massacre, in Boston, Massachusetts,[2] and is widely considered to be the first American casualty in the American Revolutionary War. Aside from the event of his death, along with Samuel Gray and James Caldwell, little is known for certain about Attucks.[3] He may have been an African American slave or freeman, merchant seaman and dockworker of Wampanoag and African descent. His father was an African-born slave and his mother a Native American.[4]

Despite the lack of clarity, Attucks became an icon of the anti-slavery movement in the 18th century. He was held up as the first martyr of the American Revolution, along with the others killed. In the early 19th century, as the abolitionist movement gained momentum in Boston, supporters lauded Attucks as an African American who played a heroic role in the history of the United States.[5]

Historians disagree on whether Crispus Attucks was a free man or an escaped slave, but agree that he was of Wampanoag and African descent. Two major sources of eyewitness testimony about the Boston Massacre, both published in 1770, did not refer to Attucks as "black" nor as a "Negro"; it appeared that Bostonians of European descent viewed him as being of mixed ethnicity. According to a contemporary account in the Pennsylvania Gazette (Philadelphia), he was a "Mulattoe man, named Crispus Attucks, who was born in Framingham, but lately belonged to New-Providence, and was here in order to go for North Carolina . . ."[6] Because of his mixed heritage, his story is also significant for Native Americans.[7]

Attucks appears to have been born a slave from Framingham, Massachusetts. His father married a woman who originated from the Natick Tribe during 1723,[8] possibly on Hartford Street. Framingham had a small population of black inhabitants from at least 1716. Attucks was of mixed African and Native American parentage and was descended from John Attucks of Massachusetts, who was hanged during King Philip's War.[9]

In 1750 William Brown, a slave-owner in Framingham, advertised for the return of a runaway slave named Crispus. In the advertisement, Brown describes what Attucks looked like and was wearing when he was last seen. He also said that a reward of 10 pounds would be given to whoever found and return Attucks to him. Attucks's status at the time of the massacre as either a free black or a runaway slave has been a matter of debate for historians. However, his descendants maintain he was a slave and ran away sometime in his late 20s.[citation needed] What is known is that Attucks became a sailor and he spent much of the remainder of his life at sea often working on whalers, which involved long voyages. Many historians also believe that he went by the alias Michael Johnson in order to avoid being caught. He may only have been temporarily in Boston in early 1770, having recently returned from a voyage to the Bahamas. He was due to leave shortly afterwards on a ship for North Carolina.[10]

Arguing the soldiers fired in self-defense, John Adams successfully defended most of the accused British soldiers against a charge of murder. Two of the soldiers were found guilty of manslaughter. Faced with the prospect of hanging, the soldiers pled benefit of clergy, and were instead branded on their thumbs. In his arguments, Adams called the crowd "a motley rabble of saucy boys, negros and molattoes, Irish teagues and outlandish Jack Tarrs."[11] In particular, he charged Attucks with having "undertaken to be the hero of the night," and with having precipitated a conflict by his "mad behavior."[12]

Two years later United States Founding Father Samuel Adams, a cousin of John Adams, named the event the "Boston Massacre," and helped ensure that it would not be forgotten.[citation needed] Boston artist Henry Pelham (half-brother of the celebrated portrait painter John Singleton Copley) created an image of the event.[citation needed] Paul Revere made a copy from which prints were made and distributed. Some copies of the print show a dark-skinned man with chest wounds, presumably representing Crispus Attucks. Other copies of the print show no difference in the skin tones of the victims.[citation needed]

The five who were killed were buried as heroes in the Granary Burying Ground, which also contains the graves of Samuel Adams, John Hancock, and other notable figures.[citation needed] While custom of the period discouraged the burial of black people and white people together, such a practice was not completely unknown.[citation needed] Prince Hall, for example, was interred in Copp's Hill Burying Ground in the North End of Boston 39.[citation needed] 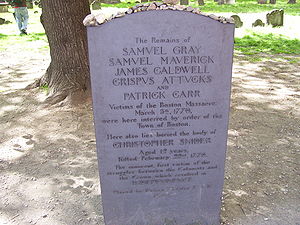 And to honor Crispus Attucks who was the leader and voice that day: The first to defy, and the first to die, with Maverick, Carr, and Gray. Call it riot or revolution, or mob or crowd as you may, such deaths have been seeds of nations, such lives shall be honored for aye...