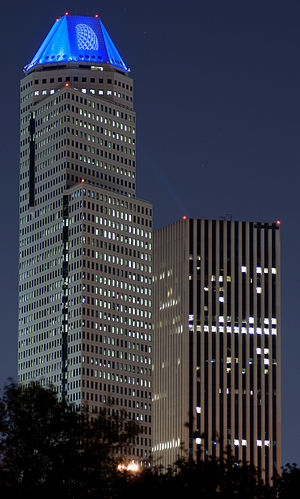 In 1959 the family of Hugh Roy Cullen, an oil businessperson and philanthropist who was recently deceased, announced that they would build a skyscraper complex in Downtown Houston. The family planned for the 12 acres (4.9 ha), 5½ city block site to accommodate several sites. The first two buildings were to be a 500 room, 15-18 story hotel and a 25 story office building. Next, a 40-45 story office building was to be completed. Other buildings were planned to be added at later times. Gerald E. Veitmann, president of the Cullen Center, said that it was going to be "a memorium to Mr. and Mrs. Cullen, an investment in excess of 100 million dollars," and "to Houston what Rockefeller Center is to New York City." Work for clearing the land was scheduled to begin in December 1959.[3] During the year, the family's plans also included another 25 story office building and a parking garage.[4] Construction of the Cullen Center, which was planned to have around one dozen buildings, was scheduled to begin on October 1, 1960, with the first building being a 21-story office building with an attached parking garage.[5]

Welton Beckett and Associates master planned the first two buildings, the 21 story, $12 million 500 Jefferson and the 12-story, $6 million Hotel America. Gerald E. Veltmann, the president of Cullen Center, Inc. said that the development "represents a marked departure from the traditional downtown scene" because the development "centers around a planning concept with four separate levels: sub surface, used for parking and mechanical equipment; surface, used for vehicular traffic, parking, entrance lobbies, and service entrances, a second level, used for pedestrian-oriented facilities such as main lobbies, shops, displays, galleries, lounges, and restaurants; and the top space, into which will rise the main towers containing hotel rooms and offices."[6] In other words, the building design separated the pedestrian and vehicular traffic from one another. The first levels were to have open plazas. The developer planned to establish air-conditioned bridges connecting the buildings at their second levels. The architect, Welton Becket of FAIA, said that the two original buildings were "esthetically related through the use of a common material—concrete—in a variety of forms—physically related by the second-level pedestrian bridges, and visually related around open plaza areas and a common exposed aggregate sidewalk."[6]

By 1987 the Canadian company Trizec Corporation bought debentures carrying an option to buy portions of the Cullen Center, including 1600 Smith Street.[11]

By 1997 Trizec had convinced several Cullen Center tenants to move to the nearby Allen Center, which was also owned by Trizec. During that year Continental Airlines announced that it was moving its headquarters to the Cullen Center. Paul Layne, a vice president of the TrizecHahn Office division, said that the Continental move would raise the Cullen Center's occupancy rate from 81 percent in November 1996 to 94 percent.[13]

Tim Reylea, the vice president of Cushman Realty Corp., said that the Continental move "is probably the largest corporate relocation in the central business district of Houston ever."[13] Bob Lanier, Mayor of Houston, said that he was "tickled to death" by the airline's move to relocate to Downtown Houston.[14] 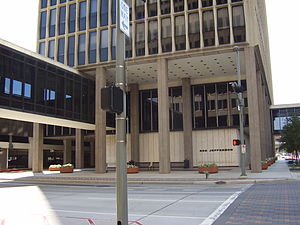 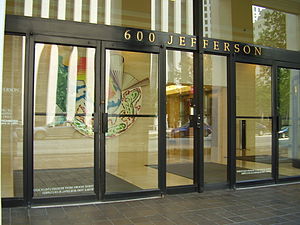 600 Jefferson, previously Continental Center II, has 20 stories and 449,087 square feet (41,721.5 m2). Neuhaus & Taylor was the design architect, Linbeck Construction Company was the general contractor, Chault & Brady was the mechanical engineer, and Elisor Engineering, Inc. was the structural engineer. The building was completed in 1972 and was renovated in 1998.[23] Continental Center II is designated as an Energy Star building.[24] As of November 2014 United Airlines is the primary tenant.[22]

The Houston Fire Department has its administrative offices in the building.[25] The administrative offices, the planning and homeland security division, and the HPD emergency operations division are located on the 7th floor.[26] The training room is also on the 7th floor.[27] The HFD chaplain, the fire codes division, the fire marshall/fire prevention division, the high rise certification division, the high rise inspections division, the public affairs division, and the firefighter recruiting division are located in Suite 600. The public education, public information office, special events, and staff services divisions are in Suite 700. The ambulance records, EMS records, fire records, and the medical director are in Suite 800.[26]

In 2009 at Continental Center II Brookfield Properties began offering office suites from 1,200 square feet (110 m2) to 2,000 square feet (190 m2) to small businesses and laid off individuals seeking to start their own businesses.[30]

In November 2014 Brookfield sold the building to DRA Advisors and Stream Realty Providers.[22]

The Crowne Plaza Hotel Houston Downtown,[31] also known as the Crowne Plaza Cullen Center Hotel, is located in the Cullen Center.[8] The hotel, initially planned as a 250 room, 10 story hotel, was built on a block bounded by Jefferson, Pease, and Smith, with the Gulf Freeway to the west. The Hotel Corporation of America began operating the hotel as Hotel America. The hotel was scheduled to be ready for occupancy in 1962.[17] By 1961 the hotel, with a groundbreaking scheduled for August 31, 1961, was scheduled to have 327 rooms.[32] The hotel has 12,000 square feet (1,100 m2) for event groups.[31]