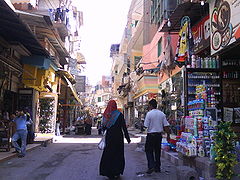 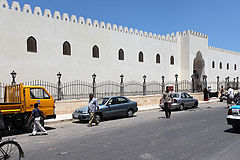 Capture of Damietta by Frisian crusaders. 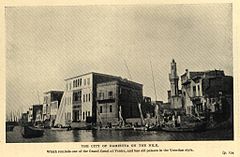 A 1911 postcard, titled The City of Damietta on the Nile.

Damietta (Egyptian Arabic: دمياط Dumyāṭ , IPA: [domˈjɑːtˤ]), also known as Damiata, or Domyat, is a port and the capital of the Damietta Governorate in Egypt, a former bishopric and present multiple Catholic titular see. It is located at the Damietta branch, a distributary of the Nile, 15 kilometres (9.3 mi) from the Mediterranean Sea, about 200 kilometres (120 mi) north of Cairo.

In Ancient Egypt, the city was known as Tamiat, but in the Hellenistic period it was called Tamiathis (Greek Ταμίαθις).[1] Mentioned by the 6th-century geographer Stephanus Byzantius,[2] the town later became known as Damiata and as Damietta.

Under Caliph Omar (579–644), the Arabs took the town by treachery and successfully resisted the attempts by the Byzantine Empire to recover it, especially in 739, 821, 921 and 968.[2] The Abbasids used Alexandria, Damietta, Aden and Siraf as entry ports to India and the Tang Empire of China.[3] Damietta was an important naval base during the Abbasid, Tulunid and Fatimid periods. This led to several attacks by the Byzantine Empire, most notably the sack and destruction of the city in May 853.

Damietta was again important in the 12th and 13th centuries during the time of the Crusades. In 1169, a fleet from the Kingdom of Jerusalem, with support from the Byzantine Empire, attacked the port, but it was defeated by Saladin.[4][5]

During preparations for the Fifth Crusade in 1217, it was decided that Damietta should be the focus of attack. Control of Damietta meant control of the Nile, and from there the crusaders believed they would be able to conquer Egypt. From Egypt they could then attack Palestine and recapture Jerusalem. When the port was besieged and occupied by Frisian crusaders in 1219, Francis of Assisi arrived to peaceably negotiate with the Muslim ruler.[6][7] The siege devastated the population of Damietta. In October 1218 reinforcements arrived including the Papal Legate Pelagius with the English earls Ranulf of Chester, Saer of Winchester and William Aubigny of Arundel, together with Odonel Aubigny, Robert Fitzwalter, John Lacy of Chester, William Harcourt and Oliver, the illegitimate son of King John.[8] In 1221 the Crusaders attempted to march to Cairo, but were destroyed by the combination of nature and Muslim defences.[9]

Damietta was also the object of the Seventh Crusade, led by Louis IX of France. His fleet arrived there in 1249 and quickly captured the fort, which he refused to hand over to the nominal king of Jerusalem, to whom it had been promised during the Fifth Crusade.[10] However, having been taken prisoner with his army in April 1250, Louis was obliged to surrender Damietta as ransom.[2]

Hearing that Louis was preparing a new crusade, the Mamluk Sultan Baibars, in view of the importance of the town to the Crusaders, destroyed it in 1251 and rebuilt it with stronger fortifications a few kilometres from the river in the early 1260s, making the mouth of the Nile at Damietta impassable for ships.[2][11]

Hellenistic Tamiathis became a Christian bishopric, a suffragan of the Metropolitan see of Pelusium, the capital of the Roman province of Augustamnica Prima, to which Tamiathis belonged. Its bishop Heraclius took part in the Council of Ephesus in 431. Helpidius was a signatory of the decree of Patriarch Gennadius of Constantinople against simony in 459. Bassus was at the Second Council of Constantinople (553). In a letter from Patriarch Michael I of Alexandria read at the Photian Council of Constantinople (879), mention is made of Zacharias of Tamiathis, who had attended a synod that Michael had convened in support of Photius. Later bishops too of Tamiathis are named in other documents.[12][13]

In 1249, when Louis IX of France captured the town, it became for a short time the seat of a Latin Church bishop.

The Latin bishopric, no longer residential, is today listed by the Catholic Church twice as a titular see under the names Tamiathis (Latin) and Damiata (Curiate Italian), each at time of episcopal or archiepiscopal]] rank, of the Latin and Melkite Catholic Churches,[14] for the Catholic Church, having been until the early 20th century an important centre for that church.[2]

The diocese was nominally restored in the 17the century when established as Latin Titular archbishopric of Tamiathis of the Romans (Latin; Damiata in Curiate Italian) and had the following incumbents of the intermediary (archiepiscopal) rank :

Demoted in 1925 as Titular bishopric, it is vacant since decades, having had the following incumbents, all of the episcopal (lowest) rank :

Established in 1900 as Titular bishopric of Damiata of the Melkite Greeks (Italian; Latin Tamiathis), suppressed in 1935, after a singl incumbent of this episcopal (lowest) rank :

Restored in 1961 as Titular archbishopric, it has had the following incumbents of the archiepiscopal (intermediary) rank :

Damietta is very famous for its furniture industry. In addition to the Egyptian market, its furniture is sold in Arab countries, Africa, Europe, US, and almost all over the world. Today, there is a canal connecting it to the Nile, which has made it an important port once again. Containers are transported through the new Damietta Port. The Damietta governorate has a population of about 1,093,580 (2006). It contains the SEGAS LNG (Liquefied Natural Gas) plant,[15] which will ultimately have a capacity of 9.6 million ton/year through two trains. The plant is owned by Segas, a joint venture of the Spanish utility Unión Fenosa (40%), Italian oil company Eni (40%) and the Egyptian companies EGAS and EGPC (10% each).[16] The plant is unusual since it is not supplied from a dedicated field, but is supplied with gas from the Egyptian grid. As of 2010[update], EMethanex, the Egyptian division of Methanex Corporation a Canadian owned company, was building a 3600 MTPD methanol plant. Damietta also has a notable furniture and woodworking industries and is also noted for its White Domiati cheese and other dairy products and Pâtisserie and Egyptian desserts. It is also a fishing port.

Köppen-Geiger climate classification system classifies its climate as hot desert (BWh), but blowing winds from the Mediterranean Sea greatly moderate the temperatures, typical to the Egypt's north coast, making its summers moderately hot and humid while its winters mild and moderately wet when sleet and hail are also common.