From Infogalactic: the planetary knowledge core
Jump to: navigation, search
This article is about El Capitán in California. For other uses, see El Capitan (disambiguation).

El Capitán (Spanish for The Captain, The Chief) is a vertical rock formation in Yosemite National Park, located on the north side of Yosemite Valley, near its western end. The granite monolith extends about 3,000 feet (900 m) from base to summit along its tallest face and is one of the world's favorite challenges for rock climbers and BASE jumpers.[citation needed]

The formation was named "El Capitán" by the Mariposa Battalion when it explored the valley in 1851. El Capitán ("the captain", "the chief") was taken to be a loose Spanish translation of the local Native American name for the cliff, variously transcribed as "To-to-kon oo-lah" or "To-tock-ah-noo-lah". It is unclear if the Native American name referred to a specific tribal chief or simply meant "the chief" or "rock chief".[4] In modern times, the formation's name is often contracted to "El Cap", especially among rock climbers and BASE jumpers.

The top of El Capitán can be reached by hiking out of Yosemite Valley on the trail next to Yosemite Falls, then proceeding west. For climbers, the challenge is to climb up the sheer granite face; there are many named climbing routes, all of them arduous. Some of these include the iron hawk route, the sea of dreams route, etc.

El Capitán is composed almost entirely of El Capitán Granite, a pale, coarse-grained granite emplaced approximately 100 mya (million years ago). In addition to El Capitán, this granite forms most of the rock features of the western portions of Yosemite Valley. A separate intrusion of igneous rock, the Taft Granite, forms the uppermost portions of the cliff face.

A third igneous rock, diorite, is present as dark-veined intrusions through both kinds of granite, especially prominent in the area known as the North America Wall.[5]

Along with most of the other rock formations of Yosemite Valley, El Capitán was carved by glacial action. Several periods of glaciation have occurred in the Sierra Nevada, but the Sherwin Glaciation, which lasted from approximately 1.3 million years ago (mya) to 1 mya, is considered to be responsible for the majority of the sculpting. The El Capitán Granite is relatively free of joints, and as a result the glacial ice did not erode the rock face as much as other, more jointed, rocks nearby.[6] Nonetheless, as with most of the rock forming Yosemite's features, El Capitán's granite is under enormous internal tension brought on by the compression experienced prior to the erosion that brought it to the surface. These forces contribute to the creation of features such as the Texas Flake, a large block of granite slowly detaching from the main rock face about halfway up the side of the cliff.

Once considered impossible to climb,[7] El Capitán is now the standard for big-wall climbing.[8] "El Cap" has two main faces, the Southwest (on the left when looking directly at the wall) and the Southeast. Between the two faces juts a prow. While today there are numerous established routes on both faces, the most popular and historically famous route is The Nose, which follows the south buttress.[8][clarification needed]

The Nose was first climbed in 1958 by Warren Harding,[9] Wayne Merry and George Whitmore in 47 days using "siege" tactics: climbing in an expedition style using fixed ropes along the length of the route, linking established camps along the way. The fixed manila ropes allowed the climbers to ascend and descend from the ground up throughout the 18-month project, although they presented unique levels of danger as well, sometimes breaking due to the long exposure to cold temperatures.[10] The climbing team relied heavily on aid climbing, using rope, pitons and expansion bolts to make it to the summit. The second ascent of The Nose was in 1960 by Royal Robbins, Joe Fitschen, Chuck Pratt and Tom Frost, who took seven days in the first continuous climb of the route without siege tactics.[9] The first solo climb of The Nose was done by Tom Bauman in 1969.[11] The first ascent of The Nose in one day was accomplished in 1975 by John Long, Jim Bridwell and Billy Westbay. Today, The Nose typically takes fit climbers 4–5 days of full climbing, and has a success rate of around 60%. 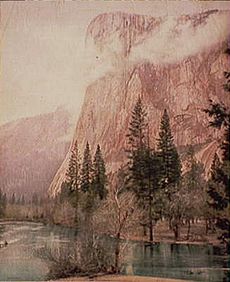 Efforts during the 1960s and 1970s explored the other faces of El Capitán, and many of the early routes are still popular today. Among the early classics are Salathé Wall (1961, Royal Robbins, Chuck Pratt and Tom Frost) on the southwest face,[12] and the North America Wall (1964, Royal Robbins, Yvon Chouinard, Chuck Pratt and Tom Frost) on the southeast face.[13] Also climbed in the 1960s are routes such as: Dihedral Wall (1962, Ed Cooper, Jim Baldwin and Glen Denny); West Buttress (1963, Layton Kor and Steve Roper); and Muir Wall (1965, Yvon Chouinard and TM Herbert). [14] Later ascents include: Wall of the Early Morning Light, now known as Dawn Wall, on the Southeast face, adjacent to the prow[15] (1970, Warren Harding and Dean Caldwell);[16] Zodiac (1972, Charlie Porter (solo)); The Shield (1972, Porter and Gary Bocarde); Mescalito (1973, Porter, Steve Sutton, Hugh Burton and C. Nelson); Pacific Ocean Wall (1975, Jim Bridwell, Billy Westbay, Jay Fiske and Fred East); Sea of Dreams (1978, Bridwell, Dale Bard and Dave Diegelman); and Jolly Roger (1979, Charles Cole and Steve Grossman). Today there are over 70 routes on "El Cap" of various difficulties and danger levels.[17] New routes continue to be established, usually consisting of additions to, or links between, existing routes.

After his successful solo ascent of the Leaning Tower, Royal Robbins turned his attention to the Yvon Chouinard-T.M. Herbert Muir Wall route, completing the first solo ascent of El Capitán during a 10-day push in 1968. The first solo ascents of El Capitán's first four classic "siege" routes were accomplished by Thomas Bauman on The Nose in 1969;[18] Peter Hann on the Salathe Wall in 1972;[19] Robert Kayen on the Layton Kor-Steve Roper West Buttress route in 1982;[20] and Beverly Johnson (first solo ascent by a woman) on the Cooper-Baldwin-Denny Dihedral Wall route in 1978.[21] Other noteworthy early solo ascents were the solo first ascent of Cosmos by Jim Dunn in 1972, Zodiac by Charlie Porter in 1972; Tangerine Trip by David Mittel in 1985; and The Pacific Ocean Wall by Robert Slater in 1982. These ascents were long 7-14 day ordeals that required the solo climber lead each pitch, and then rappel, clean the climbing gear, reascend the lead rope, and haul equipment, food, and water using a second haul rope.

Beverly Johnson was the first woman to successfully ascend El Capitán, via the Nose route, with Dan Asay in June 1973. In September 1973, Beverly Johnson and Sibylle Hechtel were the first team of women to ascend El Capitán via the Triple Direct route, which takes the first ten pitches of the Salathe Wall, then continues up the middle portion of El Capitán via the Muir Wall, and finishes on the upper pitches of the Nose route.[22] In 1977, Molly Higgins and Barb Eastman climbed the Nose, to become the second party of women to climb El Capitán and the first to climb it via the Nose.[23] In 1978, Bev Johnson was the first woman to solo El Capitán by climbing the Dihedral Wall.[24] Hazel Findlay has made three free ascents of El Capitán, including the first female ascent of Golden Gate in 2011, the first female ascent of Pre-Muir Wall in 2012, and a three-day ascent of Freerider in 2013.[25]

As it became clear that any non-crumbling face could be conquered with sufficient perseverance and bolt-hole drilling, some climbers began searching for El Cap routes that could be climbed either free or with minimal aid. The West Face route was free climbed in 1979 by Ray Jardine and Bill Price; but despite numerous efforts by Jardine and others, The Nose resisted free attempts for another fourteen years. The first free ascent of a main El Cap route, though, was not The Nose, but Salathé Wall. Todd Skinner and Paul Piana made the first free ascent over 9 days in 1988, after 30 days of working the route (graded 5.13b on the Yosemite Decimal System).[26] The Nose was the second major route to be freeclimbed. Two pitches on The Nose blocked efforts to free the route: the "Great Roof" graded 5.13c and "Changing Corners" graded 5.14a/b. In 1993, Lynn Hill came close to freeing The Nose, making it past the Great Roof and up to Camp VI without falling, stopped only on Changing Corners by a piton jammed in a critical finger hold.[10] After removing the piton she re-climbed the route from the ground. After 4 days of climbing, Hill reached the summit, making her the first person to free climb The Nose. A year later, Hill returned to free climb The Nose in a day, this time reaching the summit in just 23 hours and setting a new standard for free climbing on "El Cap."[10]

The Nose saw a second free ascent in 1998, when Scott Burke summitted after 261 days of effort.[27] On October 14, 2005, Tommy Caldwell and Beth Rodden, husband and wife, became the third and fourth people (and the first couple) to free climb The Nose. They took four days on the ascent, swapping leads with each climber free climbing each pitch, either leading or following.[28] Two days later, Caldwell returned to free climb The Nose in less than 12 hours.[29] Caldwell returned two weeks later to free climb El Cap twice in a day, completing The Nose with Rodden, then descending and leading Freerider in a combined time of 23 hours 23 minutes.[30]

On January 14, 2015 Tommy Caldwell and Kevin Jorgeson completed the first free climb of the Dawn Wall after 19 days, one of the hardest climbs in the world.[31][32]

Most of the more than 100 different routes on El Capitán have some kind of speed record attached to them. Ammon McNeely owns the most records on El Cap, 23 records in total, 13 of them being First One Day Ascents.[citation needed]

On June 22, 2010, Alex Honnold set a rope solo record on the Nose, posting a time of 5:49. He had rope soloed the Regular Route on Half Dome earlier that morning, in about 2:09.[citation needed]

Climbers Tommy Caldwell, Lynn Hill, and Alex Honnold photographed their El Capitán climbs using 360 degree spherical photography. The photographs were taken by them or by other photographers during the climbs.[37][38][39]

In January 2015, climbers Kevin Jorgeson and Tommy Caldwell photographed their free climb of the Dawn Wall.[40]

El Capitán is featured on a United States quarter dollar coin minted in 2010 as part of the America the Beautiful Quarters series.[45]