English words first attested in Chaucer, or special manuscript words of Chaucer, are a set of about two thousand English words that Geoffrey Chaucer is credited as being the first use found today in existing manuscripts.[1][2][3] This does not mean that he was the person to introduce these words into English, but that the earliest extant uses of these words are found in Chaucerian manuscripts.[4][5] The words were already in everyday speech in 14th century England (especially London) and other parts of Europe.[6][7] The claim is that these words are found for the first time in written manuscripts where he introduced them in one of his extensive works from 1374 - 1400 as the first author to use these particular words.[2] Many of Chaucer's special manuscript words from the 14th century are used today:
absent, accident, add, agree, bagpipe, border, box, cinnamon, desk, digestion, dishonest, examination, finally, flute, funeral, galaxy, horizon, infect, ingot, latitude, laxative, miscarry, nod, obscure, observe, outrageous, perpendicular, Persian, princess, resolve, rumour, scissors, session, snort, superstitious, theatre, trench, universe, utility, vacation, Valentine, veal, village, vulgar, wallet, and wildness.[3]

Historian Albert Baugh points out that some of Chaucer's aureate words came from Latin or French origin.[10] Some of Chaucer's aureate words like laureate, mediation, and oriental eventually became a part of everyday English. Baugh points out that the innovations of word development into common speech and everyday usage, such as these Chaucer words, is of considerable interest in the history of style.[11]

Below is a complete list of the 1977 Chaucer's special manuscript words that are first found in the existing manuscripts below as listed in the Oxford English Dictionary as being the first cited author.[9] Some now have different spellings and others are given the "root" word definition.[8] Some of these words are now dated or obsolete.[12] These manuscript words first found written in Chaucer's work, from The Canterbury Tales and other of his publications as shown below, were published in the 14th century.[8][9]

The Canterbury Tales is a collection of tales written sometime after 1373, with 'sondry folk' that resemble Boccaccio's stories of The Decameron of fleeing nobles.

The Knight's Tale introduces many typical aspects of knighthood such as courtly love and moral issues.

The Miller's Tale is told by a drunken miller to "quite" (requite) The Knight's Tale. The word "quite" here means to make repayment for a service - telling stories.

The Reeve's Tale is about two clerks tricking a miller. This tale is possibly based on Boccaccio's sixth story in The Decameron. 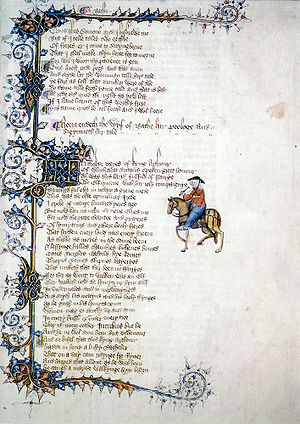 From the first page of Canterbury Tales: The Wife of Bath's Tale [13]

The Cook's Tale is a tale of an apprentice named Perkins who is fond of drinking and dancing. He ultimately is released from his master and moves in with a friend. This friend's wife is a prostitute. The story becomes more 'seedy', continuing the downward trend of the preceding tales.

The Man of Law's Tale

The Man of Law's Tale is a story about a Christian princess named Constance. She is to marry a Syrian Sultan on condition that he convert to Christianity. His mother gets involved and sets her adrift at sea.

The Wife of Bath's Tale

The Wife of Bath's Tale is a tale about marriage. Scholars have associated this story as one of the so-called "marriage group" of Chaucer tales.

The Friar's Tale is a satirical attack on the profession as a summoner.

The Summoner's Tale is a tale in defense of the satirical attack by the Friar. 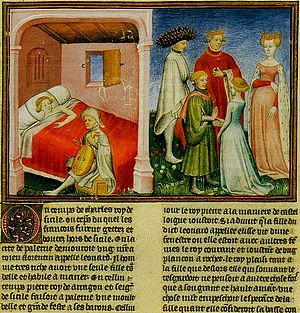 The Clerk's Tale is the story of Griselda, a young woman whose husband tests her loyalty.

The Squire's Tale is a tale of the Squire who is the Knight's son. The tale is an epic romance about a novice warrior and lover with more enthusiasm than experience. It is quite explicit and descriptive.

The Franklin's Tale focuses on issues of providence, truth, and generosity. A franklin was a medieval landowner.

The Physician's Tale is a domestic drama about the relationship between a daughter and her father. 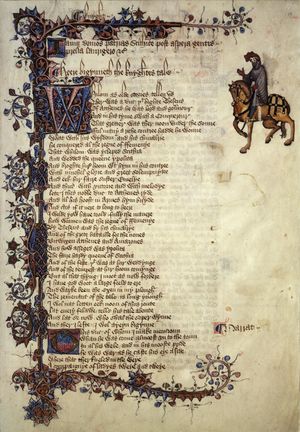 From the first page of Canterbury Tales The Knight's Tale [15]

The Pardoner's Tale is a tale in the form of a moral example.

The Shipman's Tale is similar to some of Boccaccio's stories in his Decameron and tells the story of a stingy merchant, his greedy wife and her lover.

The Prioress's Tale story is of a child martyr killed by Jews.

Tale of Sir Topas is a self-portrait of Chaucer in an unflattering and humble manner. He presents himself as a reserved awkward person.

The Tale of Melibee

The Tale of Melibee is an intentionally boring tale.

The Monk's Tale is a collection of seventeen short stories on the theme of tragedy. These are of Lucifer, Adam, Samson, Hercules, Nebuchadnezzar, Belshazzar, Zenobia, Pedro of Castile, Peter I of Cyprus, Bernabò Visconti, Ugolino of Pisa, Nero, Holofernes, Antiochus, Alexander the Great, Julius Caesar and Croesus. The Monk's Tale De Casibus Virorum Illustrium of these illustrious men is modeled after Boccaccio's De Casibus Virorum Illustrium of illustrious men.

The Nun's Priest's Tale of the Cock and the Hen, Chanticleer and Partlet poem is a vigorous and comical beast fable and mock epic.

The Second Nun's Tale tells the story of Saint Cecilia.

The Canon's Yeoman's Tale is an attack on alchemists.

The Manciple's Tale is a story of a purchasing agent for a law court telling a fable about Phoebus Apollo and his pet crow.

The Book of the Duchess

The Book of the Duchess is a poem on the death of Blanche, Duchess of Lancaster and the first wife of John of Gaunt. 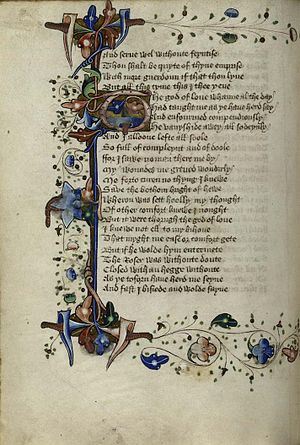 A page from c.1440 manuscript of Canterbury Tales Romaunt of Rose [17]

The Parson's Tale is a prose treatise on virtuous living.

The Parliament of Fowls is a love poem associated with Valentine's Day. Many claim Chaucer is the mythmaker of the concept as we know it today.[18]

The Romaunt of the Rose

The Romaunt of the Rose is an allegorical dream, in which the narrator receives advice from the god of love on gaining his lady's favor, her love being symbolized by a rose.

The House of Fame

Boece is Chaucer's work derived from The Consolation of Philosophy, a Latin work originally written by the Roman Christian philosopher Boethius around A.D. 524. 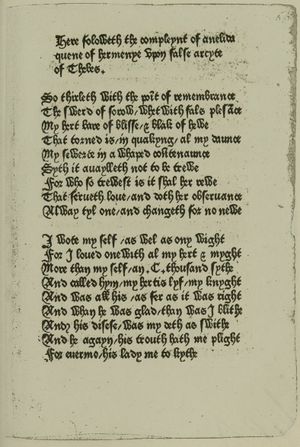 Anelida and Arcite is a retelling of an old Roman story previously written by Boccaccio.

Troilus and Criseyde is a story from Boccaccio's Il Filostrato. 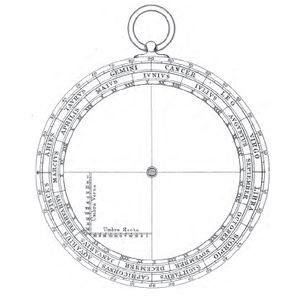 The Legend of Good Women

The Legend of Good Women is a dream vision love poem.

Treatise on the Astrolabe

Treatise on the Astrolabe is Chaucer's scientific paper of clearer definitions on how to use the Astrolabe, an astronomical instrument.

Below are words first attested to in his miscellaneous poems. 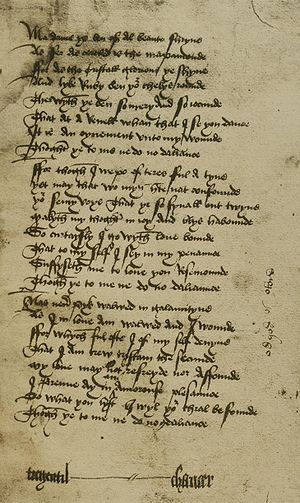 A page from original manuscript of
Balade to Rosemounde [20]

Below are some of the words first found in Chaucer's manuscripts that we use today and how they were used in his poems in the 14th century.