From Infogalactic: the planetary knowledge core
Jump to: navigation, search
For other uses, see Epidemic (disambiguation). 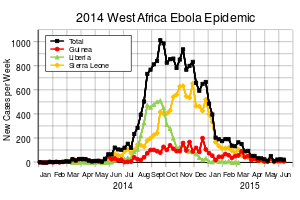 Example of an epidemic showing the number of new infections over time.

An epidemic (from Greek ἐπί epi "upon or above" and δῆμος demos "people") is the rapid spread of infectious disease to a large number of people in a given population within a short period of time, usually two weeks or less. For example, in meningococcal infections, an attack rate in excess of 15 cases per 100,000 people for two consecutive weeks is considered an epidemic. [1][2]

Epidemics of infectious disease are generally caused by several factors including a change in the ecology of the host population (e.g. increased stress or increase in the density of a vector species), a genetic change in the pathogen reservoir or the introduction of an emerging pathogen to a host population (by movement of pathogen or host). Generally, an epidemic occurs when host immunity to either an established pathogen or newly emerging novel pathogen is suddenly reduced below that found in the endemic equilibrium and the transmission threshold is exceeded.[3]

An epidemic may be restricted to one location; however, if it spreads to other countries or continents and affects a substantial number of people, it may be termed a pandemic.[1] The declaration of an epidemic usually requires a good understanding of a baseline rate of incidence; epidemics for certain diseases, such as influenza, are defined as reaching some defined increase in incidence above this baseline.[2] A few cases of a very rare disease may be classified as an epidemic, while many cases of a common disease (such as the common cold) would not.

There are several changes that may occur in an infectious agent that may trigger an epidemic. These include:[1]:55

An epidemic disease is not required to be contagious,[2][4] and the term has been applied to West Nile fever[2] and the obesity epidemic, among others.[4]

The conditions which is govern the outbreak of epidemics include infected food supplies such as contaminated drinking water and the migration of populations of certain animals, such as rats or mosquitoes, which can act as disease vectors. Certain epidemics occur at certain seasons.

For example, whooping-cough occurs in spring, whereas measles produces two epidemics, one in winter and one in March. Influenza, the common cold, and other infections of the upper respiratory tract, such as sore throat, occur predominantly in the winter. There is another variation, both as regards the number of people affected and the number who die in successive epidemics: the severity of successive epidemics rises and falls over periods of five or ten years.[5]

Many epidemics will have characteristics of both common source and propagated outbreaks.

For example, secondary person-to-person spread may occur after a common source exposure or an environmental vectors may spread a zoonotic diseases agent.[1]:56–58

Microsoft founder and philanthropist Bill Gates wrote an essay published in the New England Journal of Medicine in March 2015. In the essay, Gates states that an epidemic caused by a natural disaster or bioterrorism is the most likely event that could kill 10 million or more people all at the same time.[7]

Gates and other experts suggest that the best way to prepare for an epidemic is to have a disease surveillance system, be able to quickly dispatch emergency workers, especially local-based emergency workers, and have a legitimate way to guarantee the safety and health of health workers.[7]

Effective preparations for a response to a pandemic are multi-layered. The first layer is a disease surveillance system. The African country of Tanzania, for example, runs a national lab that runs testing for 200 health sites and tracks the spread of infectious diseases. The next layer is the actual response to an emergency. According to columnist Michael Gerson, only the U.S. military and NATO have the global capability to respond to such an emergency.[7]

Gates proposed that the world responded slowly to the Ebola virus outbreak because of a lack of preparation. Two weeks after the 2013 typhoon hit the Philippines, over 150 foreign medical teams were on the ground helping with injured victims. After the 2005 earthquake in Pakistan, a team of aid workers who had been helping Afghan refugees for several decades were able to get to the victims in less than 24 hours. Dr. Bruce Aylward, assistant director general for emergencies at the World Health Organization, says that in the case of the Ebola outbreak, "there was no way anyone could guarantee the right of medical evacuation for people affected by Ebola.” Aylward said that for future emergency health workforces, it is critical to offer a "duty of care", meaning the ability to ensure that aid workers will be taken care of in terms of health and safety.[8]

The term epidemic derives from a word form attributed to Homer's Odyssey, which later took its medical meaning from the Epidemics, a treatise by Hippocrates.[4] Before Hippocrates, epidemios, epidemeo, epidamos, and other variants had meanings similar to the current definitions of "indigenous" or "endemic."[4] Thucydides' description of the Plague of Athens is considered one of the earliest accounts of a disease epidemic.[4] By the early 17th century, the terms endemic and epidemic referred to contrasting conditions of population-level disease, with the endemic condition at low rates of occurrence and the epidemic condition widespread.[9]