His full title was "His Majesty Farouk I, by the grace of God, King of Egypt and Sudan, Sovereign of Nubia, of Kordofan, and of Darfur". He was overthrown in the Egyptian Revolution of 1952 and forced to abdicate in favor of his infant son Ahmed Fuad, who succeeded him as Fuad II of Egypt. He died in exile in Italy.

His sister Princess Fawzia Fuad was the first wife and Queen Consort of the Shah of Iran Mohammad Reza Pahlavi.

The great-great-great-grandson of Muḥammad Alī, Farouk was born in Cairo on 11 February 1920.[4][5] He was of Albanian, French and Turkish descent through his mother Queen Nazli.[6][7] Before his father's death, he was educated at the Royal Military Academy, Woolwich, England.

Upon his coronation, the 16-year-old King Farouk made a public radio address to the nation, the first time a sovereign of Egypt had ever spoken directly to his people in such a way:

Farouk was enamoured of the glamorous royal lifestyle. Although he already had thousands of acres of land, dozens of palaces, and hundreds of cars, the youthful king often travelled to Europe for grand shopping sprees, earning the ire of many of his subjects. It is said that he ate 600 oysters a week.[8] His personal vehicle was a red 1947 Bentley Mark VI, with coachwork by Figoni et Falaschi; he dictated that, other than the military jeeps which made up the rest of his entourage, no other cars were to be painted red.[9] In 1951, he bought the pear-shaped 94-carat Star of the East Diamond and a fancy-coloured oval-cut diamond from jeweler Harry Winston. 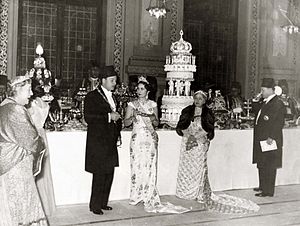 He was most popular in his early years and the nobility largely celebrated him. For example, during the accession of the young King Farouk, "the Abaza family had solicited palace authorities to permit the royal train to stop briefly in their village so that the king could partake of refreshments offered in a large, magnificently ornamented tent the family had erected in the train station."[10]

Farouk's accession initially was encouraging for the populace and nobility, due to his youth and Egyptian roots through his mother Nazli Sabri. However, the situation was not the same with some Egyptian politicians and elected government officials, with whom Farouk quarreled frequently, despite their loyalty in principle to his throne.

During the hardships of Second World War, criticism was levelled at Farouk for his lavish lifestyle. His decision not to put out the lights at his palace in Alexandria, during a time when the city was blacked out because of German and Italian bombing, was deemed particularly offensive by Egyptian people. Owing to the continuing British occupation of Egypt, many Egyptians, Farouk included, were positively disposed towards Germany and Italy, and despite the presence of British troops, Egypt remained officially neutral until the final year of the war. Consequently, the royal Italian servants of Farouk were not interned, and there is an unconfirmed story that Farouk told British Ambassador Sir Miles Lampson (who had an Italian wife), "I'll get rid of my Italians when you get rid of yours".[citation needed] In addition, Farouk was known for harbouring certain Axis sympathies and even sending a note to Adolf Hitler saying that an invasion would be welcome.[11]

Following a ministerial crisis in February 1942, the British government, through its ambassador in Egypt, Sir Miles Lampson, pressed Farouk to have a Wafd or Wafd-coalition government replace Hussein Sirri Pasha's government. On the night of 4 February 1942, British troops and tanks surrounded Abdeen Palace in Cairo and Lampson presented Farouk an ultimatum. Farouk capitulated, and Nahhas formed a government shortly thereafter. However, the humiliation meted out to Farouk, and the actions of the Wafd in cooperating with the British and taking power, lost support for both the British and the Wafd among both civilians and, more importantly, the Egyptian military.

Farouk declared war on the Axis Powers only under heavy British pressure in 1945, long after the fighting in Egypt's Western Desert had ceased.

On 17 October 1951 the Egyptian government got Parliamentary approval to cancel the 1936 Anglo-Egyptian Treaty. As a result, the British forces in Suez Canal were considered occupation forces and king Farouk was declared as "King of Egypt and Sudan". This title was not recognised by many countries and Egypt entered diplomatic debates as well as internal political unrest.

Farouk was widely condemned for his corrupt and ineffectual governance, the continued British occupation, and the Egyptian army's failure in the 1948 Arab-Israeli War to prevent the creation of the state of Israel. Public discontent against Farouk rose to new levels.[citation needed] In the American Central Intelligence Agency, the project to overthrow King Farouk - known internally as "Project FF (Fat Fucker)"[13]- was initiated by CIA operative Kermit Roosevelt, Jr. and CIA Station Chief in Cairo Miles Copeland, Jr. (who in his book the Game of Nations boasted that he later had an office next to Gamal Abdel Nasser in the Presidential Palace in Cairo).[14][page needed] The CIA was disappointed in King Farouk for not improving the functionality and usefulness of his government[15] and had actively supported the toppling of King Farouk by the Free Officers Movement.[16] Finally, on 23 July 1952, the Free Officers, led by Muhammad Naguib and Gamal Abdel Nasser, staged a military coup that launched the Egyptian Revolution of 1952. Farouk was forced to abdicate, and went into exile in Monaco and Italy where he lived for the rest of his life.[citation needed] Immediately following his abdication, Farouk's baby son, Ahmed Fuad, was proclaimed King Fuad II, but for all intents and purposes Egypt was now governed by Naguib, Nasser and the Free Officers.[citation needed] On 18 June 1953, the revolutionary government formally abolished the monarchy, ending 150 years of the Muhammad Ali dynasty's rule, and Egypt was declared a republic.

The Egyptian government quickly moved to auction off the King's vast collection of trinkets and treasures,[17] including his seven-piece bedroom suite that was inspired by Napoleon and Josephine's suite at the Château de Malmaison.[18] Among the more famous of his possessions was one of the rare 1933 Double Eagle coins, though the coin disappeared before it could be returned to the United States. (It later reappeared in New York in 1996 and was eventually sold at auction for more than seven million dollars.)[19]

The 94-carat Star of the East Diamond and another diamond bought from Harry Winston had not been paid for by the time of the King's overthrow in 1952; but, three years later, an Egyptian government legal board entrusted with the disposal of the former royal assets, ruled in Winston's favour. Nevertheless, several years of litigation were needed before Winston was able to reclaim the Star of the East from a safe-deposit box in Switzerland.

File:Farouk I, Narriman & Fuad II in Capri.jpg
Farouk I with his wife Narriman and their son Fuad II in exile in Capri, Italy (1953)

Farouk fled Egypt in great haste, and his abandoned possessions—including a huge collection of pornography—became objects of curiosity and ridicule.[20]

On his exile from Egypt, Farouk settled first in Monaco, and later in Rome. On 29 April 1958, the United Arab Republic, a federation of Egypt and Syria issued rulings revoking his citizenship.[21] He was granted Monegasque citizenship in 1959 by his close friend Prince Rainier III.[22]

Farouk was thin early in his reign but later gained weight. Weighing nearly 136 kg (300 pounds)—an acquaintance described him as "a stomach with a head". He died in the Ile de France restaurant in Rome on 18 March 1965, collapsing at his dinner table following a characteristically heavy meal.[23] While some claim he was poisoned by Egyptian Intelligence,[24] no official autopsy was conducted on his body. His will stated that his burial place should be in the Al Rifa'i Mosque in Cairo, but the request was denied by the Egyptian government under Gamal Abdel Nasser, and he was buried in Italy. The funeral service held in Rome was attended by his mother, Nazli Sabri.[25] King Faisal of Saudi Arabia stated he would be willing to have King Farouk buried in Saudi Arabia, upon which President Nasser agreed for the former monarch to be buried in Egypt, but not in Rifai' mosque. The body of King Farouk returned to Egypt on 31 March 1965 at night and was secretly buried in the Ibrahim Pasha Burial Site in Imam El Shafi' area.[26] 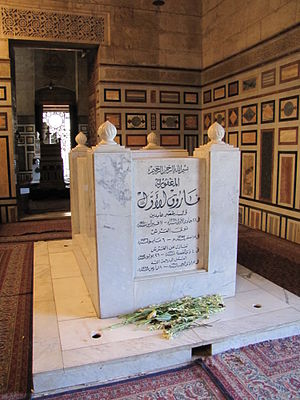 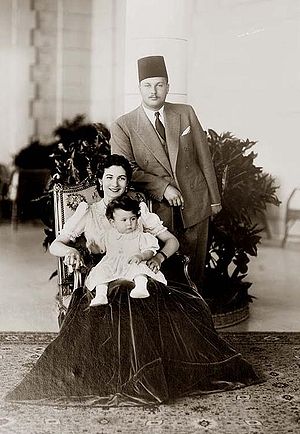 Farouk I with his wife Queen Farida and their first-born daughter Farial (c. 1939)

In addition to an affair with the British writer Barbara Skelton, among numerous others, Farouk was married twice, with a claim of a third marriage. His first wife was Safinaz Zulficar (1921–1988), the daughter of Youssef Zulficar Pasha. Safinaz was renamed Farida upon her marriage. They were married in January 1938,[27] and divorced in 1948, producing three daughters.

While in exile in Italy, Farouk met Irma Capece Minutolo, an opera singer, who became his companion. In 2005, she claimed that she married the former King in 1957.[28]

The ostentatious king's name is used to describe imitation Louis XV-style furniture known as "Louis-Farouk".[29] The imperial French style furniture became fashionable among Egypt's upper classes during Farouk's reign so Egyptian artisans began to mass-produce it. The style uses ornate carving, is heavily gilded, and is covered in elaborate cloth.[30] The style, or imitations thereof, remains widespread in Egypt.

Gore Vidal's 1953 pulp novel Thieves Fall Out is set against his overthrow.

In 2007, the MBC aired an Egyptian television series titled Al Malik Farouk about the life of King Farouk and he was portrayed by Syrian actor Taym Hassan.[4][33]