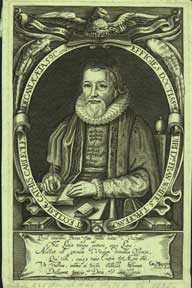 His early preferments were the rectory of Broughton Astley, Leicestershire, a lectureship at St. Paul's Cathedral, London, and the rectory of St. Peter's, Cornhill, London. In controversy against Catholicism he took a prominent part, and it produced his first publication.[2] He graduated D.D. in 1618. Early in 1622 he was employed by James I as a disputant against John Percy alias Fisher (1569–1641), to stay the Roman Catholic tendencies of Mary, Countess of Buckingham. He held two conferences; the third (24 May 1622) was entrusted to William Laud. White's Replie to Fisher (1624) was dedicated to James I.[3] On 14 September 1622 White was presented to the deanery of Carlisle (installed 15 October). He took part, in conjunction with Daniel Featley, in another discussion with Fisher, opened on 27 June 1623, at the house of Sir Humphrey Lynde, in Sheer Lane, London.[4]

In 1625 White became senior dean of Sion College, London, which existed then only on paper. He was consecrated bishop of Carlisle on 3 December 1626 at Durham House, London, by Richard Neile of Durham, John Buckeridge of Rochester, and three other prelates, John Cosin preaching the consecration sermon. His elevation was much canvassed.[5] It was said that he had 'sold his orthodoxe bookes and bought Jesuits'.' Sir Walter Earle referred to the matter in parliament (11 February 1628), quoting the line 'Qui color albus erat, nunc est contrarius albo'.[6] On 22 January 1629 he was elected bishop of Norwich; and he was elected bishop of Ely on 15 November 1631. Shortly afterwards he held a conference at Ely House, Holborn, with Theophilus Brabourne on the Sabbath question, and had much to do with Brabourne's subsequent prosecution. His Treatise of the Sabbath-Day (1635; 3rd ed. 1636) was dedicated to Laud and written at the command of Charles I. White treated the question doctrinally; its historical aspect was assigned to Peter Heylyn. He visited Cambridge in 1632, to consecrate the chapel of Peterhouse. His last publication was An Examination and Confutation of . . . A Briefe Answer to a late Treatise of the Sabbath-Day, 1637; this Briefe Answer was a dialogue by Richard Byfield, with title The Lord's Day is the Sabbath Day (1636). He died at Ely House, Holborn, in February 1638, and was buried in St. Paul's Cathedral. His will, dated 4 March 1637, proved 27 February 1638 by his widow Joane White, shows that he survived a son, and left married daughters and several grandchildren; the bulk of his property went to his grandson Francis White.

Among the many, the bishop ordained Ralph Wheelock, Clare College graduate, and first schoolmaster of America's first free school in Dedham, Massachusetts, on 6 May 1630.