Franz Sigel (November 18, 1824 – August 21, 1902) was a German military officer, revolutionist and immigrant to the United States who was a teacher, newspaperman, politician, and served as a Union major general in the American Civil War. His ability to recruit German-speaking immigrants to the Union armies garnered the approval of President Abraham Lincoln, but he was strongly disliked by General-in-Chief Henry Halleck and rated overall as a poor leader.

Sigel was born in Sinsheim, Baden (Germany), and attended the gymnasium in Bruchsal.[1] He graduated from Karlsruhe Military Academy in 1843, and was commissioned as a lieutenant in the Baden Army. He met the revolutionaries Friedrich Hecker and Gustav von Struve and became associated with the revolutionary movement. He was wounded in a duel in 1847. The same year, he retired from the army to begin law school studies in Heidelberg. After organizing a revolutionary free corps in Mannheim and later in the Seekreis county, he soon became a leader of the Baden revolutionary forces (with the rank of colonel) in the 1848 Revolution, being one of the few revolutionaries with military command experience. In April 1848, he led the "Sigel-Zug", recruiting a militia of more than 4,000 volunteers to lead a siege against the city of Freiburg. His army was annihilated on April 23, 1848 by the better-equipped and more experienced Prussian and Württemberg troops. In 1849, he became Secretary of War and commander-in-chief of the revolutionary republican government of Baden. Wounded in a skirmish, Sigel had to resign his command but continued to support the revolutionary war effort as adjutant general to his successor Ludwik Mieroslawski. In July, after the defeat of the revolutionaries by Prussian troops and Mieroslawski's departure, Sigel led the retreat of the remaining troops in their flight to Switzerland.[2] Sigel later went on to England. Sigel emigrated to the United States in 1852, as did many other German Forty-Eighters.

Sigel taught in the New York City public schools and served in the state militia. He married a daughter of Rudolf Dulon and taught in Dulon's school.[3] In 1857, he became a professor at the German-American Institute in St. Louis, Missouri. He was elected director of the St. Louis public schools in 1860. He was influential in the Missouri immigrant community. He attracted Germans to the Union and antislavery causes when he openly supported them in 1861.

Shortly after the start of the war, Sigel was commissioned colonel of the 3rd Missouri Infantry, a commission dating from May 4, 1861. He recruited and organized an expedition to southwest Missouri, and subsequently fought the Battle of Carthage, where a force of pro-Confederate Missouri militia handed him a setback in a strategically insignificant fight. However, Sigel's defeat did help spark recruitment for the Missouri State Guard and local Confederate forces. Sigel later took part in a skirmish at Dug Springs.[2]

Throughout the summer, President Lincoln actively sought the support of antislavery, pro-Unionist immigrants. Sigel, always popular with the German immigrants, was a good candidate to advance this plan. He was promoted to brigadier general on August 7, 1861, to rank from May 17, one of a number of early political generals endorsed by Lincoln.

Sigel served under Brig. Gen Nathaniel Lyon in the capture of the Confederate Camp Jackson in St. Louis and at the Battle of Wilson's Creek, where his command was routed after making a march around the Confederate camp and attacking from the rear. Sigel conducted the retreat of the army after the death of General Lyon.[2] 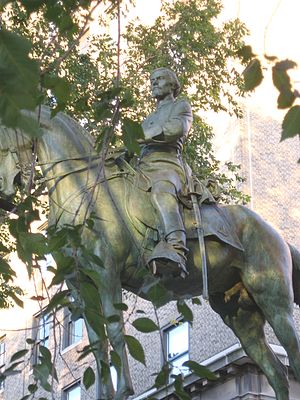 His finest performance came on March 8, 1862, at the Battle of Pea Ridge, where he commanded two divisions and personally directed the Union artillery in the defeat of Maj. Gen. Earl Van Dorn on the second day of the battle.[4]

Sigel was promoted to major general on March 21, 1862. He served as a division commander in the Shenandoah Valley and fought unsuccessfully against Maj. Gen. Thomas J. "Stonewall" Jackson, who managed to outwit and defeat the larger Union force in a number of small engagements. He commanded the I Corps in Maj. Gen. John Pope's Army of Virginia at the Second Battle of Bull Run, another Union defeat, where he was wounded in the hand.

Over the winter of 1862–63, Sigel commanded the XI Corps, consisting primarily of German immigrant soldiers, in the Army of the Potomac. During this period, the corps saw no action; it stayed in reserve during the Battle of Fredericksburg. Sigel had developed a reputation as an inept general, but his ability to recruit and motivate German immigrants kept him alive in a politically sensitive position. Many of these soldiers could speak little English beyond "I'm going to fight mit Sigel", which was their proud slogan and which became one of the favorite songs of the war. They were quite disgruntled when Sigel left the corps in February 1863, and was replaced by Maj. Gen. Oliver O. Howard, who had no immigrant affinities. Fortunately for Sigel, the two black marks in the XI Corps' reputation—Chancellorsville and Gettysburg—would occur after he was relieved.

The reason for Sigel's relief is unclear. Some accounts cite failing health; others that he expressed his displeasure at the small size of his corps and asked to be relieved. General-in-chief Henry W. Halleck detested Sigel, and managed to keep him relegated to light duty in eastern Pennsylvania until March 1864. President Lincoln, for political reasons, directed Secretary of War Edwin M. Stanton to place Sigel in command of the new Department of West Virginia.

In his new command, Sigel opened the Valley Campaigns of 1864, launching an invasion of the Shenandoah Valley. He was soundly defeated by Maj. Gen. John C. Breckenridge at the Battle of New Market, on May 15, 1864, which was particularly embarrassing due to the prominent role young cadets from the Virginia Military Institute played in his defeat. [4] After the battle, Sigel was replaced by Maj. Gen. David Hunter. In July, Sigel fought Lt. Gen. Jubal A. Early at Harpers Ferry,[4] but soon afterward was replaced by Albion P. Howe.

Sigel spent the rest of the war without an active command. 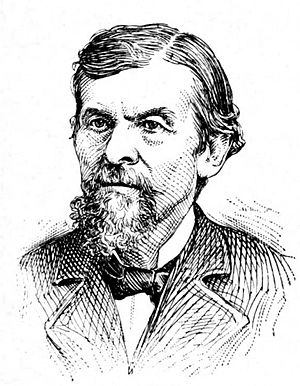 Sigel resigned his commission on May 4, 1865. He worked as editor of the Baltimore Wecker for a short time,[2] and then as a newspaper editor in New York City. He filled a variety of political positions there, both as a Democrat and a Republican. In 1869, he ran on the Republican ticket for Secretary of State of New York, losing to the incumbent Democrat Homer Augustus Nelson. In May 1871 he became collector of internal revenue, and then in October 1871 register of the city.[5] In 1887, President Grover Cleveland appointed him pension agent for the city of New York. He also lectured, worked in advertising and published the New York Monthly, a German-American periodical, for some years.[2]

Franz Sigel died in New York in 1902 and is buried there in Woodlawn Cemetery in the Bronx. Elsie Sigel was his granddaughter.

Statues of him stand in Riverside Park, corner 106th Street in Manhattan and in Forest Park in St. Louis, Missouri. There is also a park named for him in the Bronx, just south of the Courthouse near Yankee Stadium.[6] Siegel Street in Williamsburg, Brooklyn was named after him,[7] Sigel Street in Worcester, Massachusetts was also named after him, as well as the village of Sigel, Pennsylvania, founded in 1865. Sigel Township, Minnesota, settled in 1856 and organized in April 1862, was also named for Sigel. In about 1873 Sigel himself visited Sigel Township and New Ulm, Minnesota.[8]