Frickley Athletic Football Club is a football club in South Elmsall, West Yorkshire, England who play in the Northern Premier League Premier Division. Frickley Colliery F.C. as they were known until 1974, have won the Sheffield and Hallamshire Senior Cup on twelve occasions, second only to Sheffield Wednesday.[1] Since 1910 Frickley have played home matches at Westfield Lane Stadium, on the edge of the former Frickley Colliery site.

Frickley were officially formed in 1910 as part of the wider Frickley Athletic Club of the Cartlon Main owned Frickley Colliery. It is widely accepted that Frickley initially competed in the Sheffield Association League and the Yorkshire League, before joining the Midland League, where the club spent many years. Despite this, records show that a Frickley team competed in the Mexborough Montagu Hospital Charity Cup as early as 1908 and in the South Yorkshire League in 1908 prior to joining the Sheffield Association League.[2] In 1960, after finishing bottom of the Midland League[3] and the Midland League disbanding due to lack of teams, Frickley became the only Yorkshire football club to ever play in the Cheshire County League, returning to the Midland League in 1970. Frickley joined the Northern Premier League in 1976, then spent seven seasons at the pinnacle of non-league football, the Football Conference (for six of those years still known as the Alliance Premier League), with a highest finish of 2nd place in 1985–86 before being relegated the next season. At that time the club had four players in the England Non League team: Paul Shirtliff, Russ Wilcox, Gary Hooley and Paul Wilson. 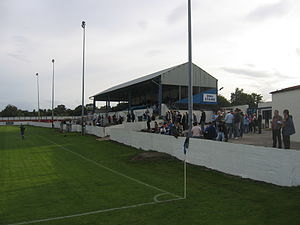 The football club was formed as part of the wider Frickley Athletic Club of Frickley Colliery, owned by the Carlton Main Company, a model employer. Other sporting activities which were on offer as part of the club included the "Harriers" athletics team and, as with the origins of many football clubs, a cricket team. One of first known references to the club was in a Yorkshire Telegraph and Star newspaper article in 1908, with the club known then as Frickley Colliery Athletic and whilst the club's name quickly changed to a simpler "Frickley Colliery" the club badge maintained the original "Frickley AC" moniker until the 1980s.[4] In the 1970s Frickley began to drop the "Colliery" title at various times, officially adopting the name "Frickley Athletic" in 1974. Frickley are known as "The Blues" due to the tradition of wearing blue jerseys for home matches. The club is namechecked in the song "Frickley", by Chumbawamba who adopted the colliery as their chosen picket line in the UK Miner's Strike of 1984-85.

Frickley competed in the FA Cup from very early in the club's history, with regional preliminary matches in the 1910s and 1920s.[5] Frickley reached the third round of the competition in the 1985–86 season, following an away win at league club Hartlepool United in the second round with Frickley eventually being eliminated by Rotherham United before a record crowd of 5,800 at Westfield Lane. To date, this remains the furthest the club have ever progressed in the competition. 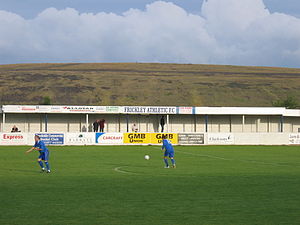 Since 1910 Frickley have played home games at Westfield Lane. The ground was initially used for athletics as early as 1904, by the colliery, with the main stand being approved for construction in 1927 and opened in 1929, with the help of the miner's welfare fund.[6]

While the colliery was still operating the stadium sat at the foot of a tall spoil tip, which has since been largely lowered in height and landscaped as part of Frickley Country Park.

Frickley are planning substantial redevelopments to the stadium and surrounding area as part of the £17m regeneration of the former Frickley colliery site. The Frickley Colliery Cricket Club ground is also situated on Westfield Lane, with the football stadium and cricket ground sitting side by side. In the past the stadium has played host to a number of other sporting events such as gymkhana, motorsports, boxing and strong man competitions.

In the past Westfield Lane has been used as a cup final venue for various local cup competitions featuring amateur and junior football clubs.

Alongside the first team squad there are a number of other development squads at various age levels within the club academy. In 2015 Frickley and Barnsley announced a partnership between the two clubs to work together at academy level.[8]