Gefreiter (abbr. Gefr. [ German > "Exempted"]) is a German, Swiss and Austrian military rank that has existed since the 16th century. It is usually the second rank or grade to which an enlisted soldier, airman or sailor could be promoted.[1][2]

Within the combined NATO rank scale, the modern-day rank of Gefreiter is usually equivalent to the NATO-standard rank scale OR-2. The word has also been lent into the Russian language, and is in use in several Russian and post-Soviet militaries. 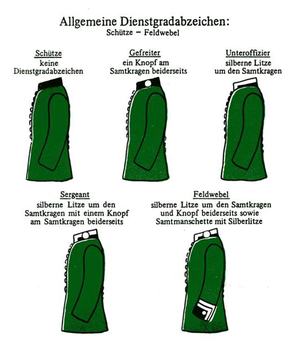 Historically the military rank of Gefreiter (also Gefreite)[3] emerged in 16th-century Europe for the German Landsknechte foot soldiers,[4] predominantly made up of German and Swiss mercenary pikemen and supporting infantry foot soldiers.[5][6][7][8] Those soldiers who proved especially reliable and experienced were appointed to gefreyten Knechten (exempted Servants/Soldiers; a cognate to 'knight') and were installed in critical battlefield positions, among their extra rank privileges they were exempted in general from guard watch duties.[1][5][6][9]

In the Royal Prussian Army up until its reorganization after 1806, there existed along with Gefreiter the rank of Gefreite-Korporale[5] who wore a silver Portepee (sword lanyard) and were officer cadets specifically selected for higher advancement, they stood equal with their officer cadet counterpart the Portepee-Fähnriche.[5] The Gefreite-Korporale was a rank that also existed along with Gefreiter in the Austrian Army during the Thirty Years' War.[5]

Gefreiter (abbr. Gefr. or G.) is the second enlisted rank grade within the modern-day Army (Heer), Air Force (Luftwaffe) and Navy (Marine) of the Bundeswehr.[12] Following the NATO ranking system, Gefreiter equates to OR-2 on the NATO-standard rank scale, the rank is thus equivalent to either private, private first class, vice corporal or corporal rank depending on the chosen NATO-allied force used for the comparison.[2] It is grade A4 in the pay scale of the Federal Ministry of Defence.

The sequence of ranks (top-down approach) in this particular group is as follows:

In line with Bundeswehr rank advancement conditions, enlisted personnel OR-1 may be promoted to OR-2 level after passing primary recruit training (usually after three to six months, depending on branch of service and curriculum) to the rank of Gefreiter.

Throughout the periods of the Royal Prussian Army, Imperial Army of the German Empire, Reichswehr and the German Wehrmacht, the rank of Gefreiter was considered in English the equivalent to a British Army Lance Corporal rank, with Obergefreiter as senior lance corporal or rather second corporal in the artillery, and a full corporal rank known as Unteroffizier[11] (subordinate non-commissioned officer) which replaced the Korporal rank from 1856. Within the army branch of the German Wehrmacht, a rank of Oberschütze (senior rifleman) once existed between the ranks of Gefreiter and Schütze/Soldat ("[enlisted] ordinary-rank rifleman/soldier"). In modern times the Unteroffizier rank is now considered in English the equivalent to a sergeant and less a corporal rank, under the NATO rank scale OR-5.

One of the best-known holders of the rank of Gefreiter was Adolf Hitler, who held the rank in the Bavarian Reserve Infantry Regiment 16 of the Royal Bavarian Army during World War I.

Gefreiter (abbr. Gfr) is a military rank of the Austrian Bundesheer. It might be comparable to enlisted men OR2/ private 1st Class ranks in Anglophone armed forces. However, in the Bundesheer it belongs to the so-called charges rank group (OR2 to OR4).

In the k.u.k. Austro-Hungarian Army (1867–1918) Gefreiter (Hungarian: Őrvezetö) was corresponding to Patrouilleführer, and Vormeister. It was used by the k.u.k. Kaiserjäger as well as the Feldjäger, Standschützen troops, k.u.k. Cavalry, Medical corps, and Infantry.

Then rank insignia was a single white celluloid-star on the stand-up collar of the so-called Waffenrock (en: Tunic) on gorget patch (de: Paroli). Stand-up collar and background of the gorget patch showed a particular egalisation colour.

Gefreiter in adjustation of the infantry

Yefreytor in Russia and the post-Soviet states

Yefreytor (Russian: Ефрейтор) is a German loanword in Russian and denotes a similar rank in the Russian army.

In Russia, the rank of yefreytor was introduced by Peter I in 1716 to the infantry, cavalry and engineer forces. The rank was not used after 1722. During the reign of Paul I it was made an equivalent rank to private, which after the reign of Alexander I was used only for the Imperial Guard. Yefreytor was re-introduced in the course of the military reforms of 1826.

In the armed forces of the Soviet Union (and later the Russian Federation) yefreytor is the highest rank of enlisted personnel. According to NATO-ranksystem the rank might be comparable to OR-2 in Anglophone armed forces.