The Great Britain Davis Cup team represents the island of Great Britain in Davis Cup tennis competition and is controlled by the Lawn Tennis Association. The British Isles played in the very first International Lawn Tennis Challenge (as the tournament was known until 1945). They are the third most successful team in terms of championships won, with 10, but have appeared in only two finals since 1937. Their win in the 2015 tournament was their first for 79 years, the longest interval between titles in the event's history. 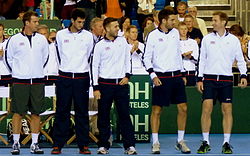 The following players have been called up in the last two years. (Most recent call-up in brackets)

Here is the list of all match-ups since 1981, when the competition started being held in the current World Group format.