From Infogalactic: the planetary knowledge core
(Redirected from Hiberno-Norman)
Jump to: navigation, search
For other uses, see Peerage of Ireland and Gaelic nobility of Ireland. 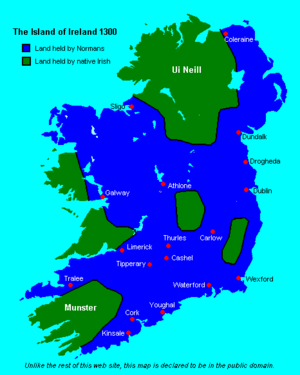 The Hiberno-Normans are those Normans who settled in Ireland after the Norman conquest of Ireland in 1169 and who remained a distinct community (the Anglo-Irish) until their eclipse in the early 17th century following the Tudor conquest of Ireland. The term embraces both their origins as a distinct community with their own dialect of Norman-French and their development in Ireland (the prefix "Hiberno" means "relating to Ireland or the Irish", from Hibernia). The Clan Burke, FitzGeralds, Butlers and de Berminghams are notable families among them.

The Hiberno-Normans often admitted little if any real fealty to the Anglo-Norman settlers in England,[1] and soon began to interact and intermarry with the Gaelic nobility of Ireland, especially outside the zone of English control known as the Pale. This process of gaelicisation became known as the Hiberno-Normans becoming more Irish than the Irish themselves (Latinised as Hiberniores Ipsis Hibernis).

By the late 16th century, the Hiberno-Normans began to be referred to as the Old English. In the Irish language, while they were known as the gaill or "foreigners", people born in England were called Sasanaigh or "Saxons" and there was a clear distinction made between Gaill and Sasanaigh in the Irish annals. 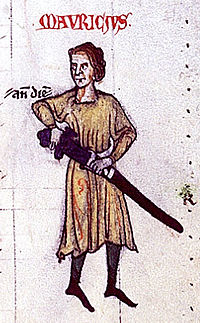 Maurice FitzGerald, Lord of Lanstephan, progenitor of the Irish FitzGerald dynasty, from a manuscript of the Expugnatio Hibernica, an account of the 1169 invasion of Ireland written by Maurice's nephew, Gerald of Wales, in 1189.

The following is a list of Hiberno-Norman surnames, many of them unique to Ireland. For example, the prefix "Fitz" meaning "son of", in surnames like FitzGerald appears most frequently in Hiberno-Norman surnames. (cf. modern French "fils de" with the same meaning).[2] However, very few names with the prefix "Fitz-" sound Norman but are actually of native Gaelic origin; most notably FitzPatrick (from the Mac Giolla Phádraig, kings of Osraige) and FitzDermot (Mac Gilla Mo-Cholmóc, of the Uí Dúnchada sept of the Uí Dúnlainge based at Lyons Hill, Co. Dublin).

The annals of Ireland make a distinction made between Gaill and Sasanaigh. The former were split into Fionnghaill or Dubhghaill, depending upon how much the poet wished to flatter his patron.[4]

There are a number of texts in Hiberno-Norman French, most of them administrative (including commercial) or legal, although there are a few literary works as well.[5][6] There is a large amount of parliamentary legislation, including the famous Statute of Kilkenny and municipal documents.

The major literary text is The Song of Dermot and the Earl, a chanson de geste of 3,458 lines of verse concerning Dermot McMurrough and Richard de Clare, 2nd Earl of Pembroke (known as "Strongbow").[7] Other texts include the Walling of New Ross composed about 1275, and early 14th century poems about the customs of Waterford.