Highnam is a village and civil parish on the outskirts of the city of Gloucester. It is three miles northwest of the city on the A40, on its way to Ross, west of Alney Island and Over Bridge. The parish includes the villages of Lassington and Over. In the 2001 census the parish had a population of 2,014,[1] reducing to 1,916 at the 2011 census.[2]

Highnam was originally made up of farm land, which explains some of its street names (Brimsome Meadow, Poppy Field, Stoney Field, Long Field, Peters Field, Williams Orchard, et al.). As a village, Highnam is fairly small, containing a few social amenities. Its contents include the Church of the Holy Innocents, a school (Highnam C of E Primary[3]), a village hall, a day nursery, a village shop and a doctor's surgery.

The Arnold family were Lords of the Manor in the sixteenth century- the best known member of the family is Sir Nicholas Arnold (died 1580), Lord Deputy of Ireland.

Highnam has an eighteen hole golf course and a large business park just outside the main village. Aside from buildings, it is home to both football and cricket teams Highnam Court Cricket Club and also Beavers, Cubs, Scouts and Brownies groups. A new feature in 2007 was the addition of a Youth Café. 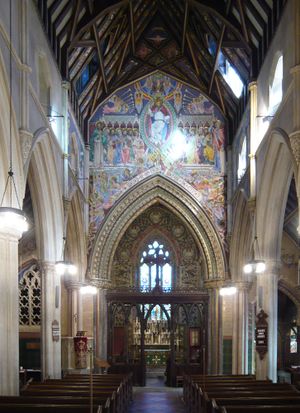 The interior of Highnam church

The church of the Holy Innocents, Highnam was constructed between 1849 and 1851 at the request of Thomas Gambier Parry in memory of his first wife and those of his children who died at an early age. The church was designed by Henry Woodyer in a Gothic style.

Gambier-Parry adorned the whole of the chancel, including the roof, and much of the nave with frescoes using a new "spirit fresco" method he adapted from his study of Italian fresco painters. The church has been described by Sir John Betjeman as "The most complete Victorian Church in this country".[6] In Simon Jenkins' book England's Thousand Best Churches, Holy Innocents was rated in the "Top 100" with four stars.[7]

A major restoration of the church and frescoes was completed in 1994. The Grade I listed church forms an ensemble with its listed Church Lodge, Rectory, Memorial Hall and Old Schoolhouse on the edge of the park of Highnam Court.[8]

The village falls in the 'Highnam with Haw Bridge' electoral ward. This ward starts in the north at Forthampton and stretches south to Highnam. The total ward population at the 2011 census was 4,206.[9]