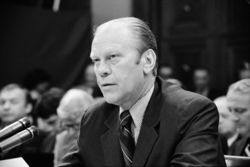 The U.S. House Committee on the Judiciary, also called the House Judiciary Committee, is a standing committee of the United States House of Representatives. It is charged with overseeing the administration of justice within the federal courts, administrative agencies and Federal law enforcement entities. The Judiciary Committee is also the committee responsible for impeachments of federal officials. Because of the legal nature of its oversight, committee members usually have a legal background, but this is not required.

In the 113th Congress, the chairman of the committee is Republican Bob Goodlatte of Virginia, and the ranking minority member is Democrat John Conyers of Michigan. In prior years, Lamar S. Smith of Texas was the chairman, and prior to that John Conyers served as chairman.

The committee was created on June 6, 1813 for the purpose of considering legislation related to the judicial system. This committee approved articles of impeachment against three Presidents: Andrew Johnson (1868), Richard Nixon (1974), and Bill Clinton (1998).

The Antitrust Task Force during the 108th Congress existed from March 26, 2003, to September 26, 2003. All Judiciary Committee Members also served as members of the Task Force,[2] and conducted hearings and investigations into consolidation of the Bell Telephone Companies.[3]

Established in September 2008,[7] the Judicial Task force on Judicial Impeachment was to look into charges against District Judge Thomas Porteous.[7] The investigation was not completed by the end of the 110th Congress, and it was reestablished after the 111th Congress convened in January 2009.[8] The responsibilities of the Task Force were expanded to include the case of Judge Samuel B. Kent,[9] leading to hearings[10] and his subsequent impeachment by the full House of Representatives.[11] The Task force finally voted to impeach Porteous on January 21, 2010.