From Infogalactic: the planetary knowledge core
Jump to: navigation, search
Not to be confused with Inuit. 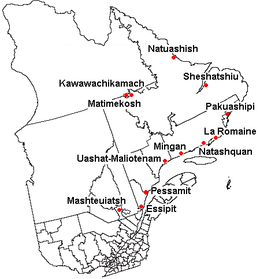 The Innu (or Montagnais) are the Aboriginal inhabitants of an area in Canada they refer to as Nitassinan (“Our Land”), which comprises most of the northeastern portion of the province of Quebec and some western portions of Labrador. Their population in 2003 included about 18,000 people, of which around 14,000 lived in Quebec, under 3000 in Labrador, and the rest outside their traditional territory.[citation needed]

Their ancestors were known to have lived on these lands as hunter-gatherers for several thousand years, living in tents made of animal skins. Their subsistence activities were historically centred on hunting and trapping caribou, moose, deer and small game. Some coastal clans also practised agriculture, fished, and managed maple sugarbush.[citation needed]

Their language, Innu or Ilnu (popularly known as Montagnais),[1] is spoken throughout Nitassinan, with certain dialect differences. It is part of Cree language group, and unrelated with neighboring Inuit language.

The Innu were allied with neighbouring Atikamekw, Maliseet and Algonquin against their traditional enemies, the Mi'kmaq and Iroquois. During the Beaver Wars (1640 –1701) the Iroquois repeatedly invaded their territories, and enslaved women and warriors, as well as plundering their hunting grounds in search of more furs. Since these raids were made by the Iroquois with unprecedented brutality, the Innu themselves adopted the torment, torture, and cruelty of their enemies. The Naskapi, on the other hand, were usually in conflicts with the southward advancing Inuit in the east.[citation needed]

The Innu people are frequently categorized into two groups, the Neenoilno, often called by Europeans Montagnais (French: “mountain people”, /ˌmɔːntənˈjeɪ/),[2] or Innu proper (Nehilaw and Ilniw - “people”), who live along the north shore of the Gulf of Saint Lawrence, in Quebec; and the less numerous Naskapi (Innu and Iyiyiw), who live farther north. The Innu recognize several distinctions (e.g. Mushuau Innuat, Maskuanu, Uashau Innuat) based on different regional affiliations and various dialects of the Innu language.

The word Naskapi was first recorded by French colonists in the 17th century and was subsequently applied to Innu groups beyond the reach of missionary influence. It particularly applied to those living in the lands which bordered Ungava Bay and the northern Labrador coast, near the Inuit communities of northern Quebec and northern Labrador. It is here that the term came to be used for the Naskapi First Nation.

The Naskapi are traditionally nomadic peoples, in contrast with the more sedentary Montagnais, who establish settled territories. Mushuau Innuat (plural), while related to the Naskapi, split off from the tribe in the 1900s. They were subject to a government relocation program at Davis Inlet. Some of the families of the Naskapi Nation of Kawawachikamach have close relatives in the Cree village of Whapmagoostui, on the eastern shore of Hudson Bay.

Since 1990, the Montagnais people have generally chosen to be officially referred to as the Innu, which means human being in Innu-aimun, while the Naskapi have continued to use the word Naskapi.

Samuel de Champlain befriended members of this group who insisted that he help them in their conflict with the Iroquois, who were ranging north from their traditional territory in present-day New York state. On July 29, 1609, at Ticonderoga or Crown Point, New York, (historians are not sure which of these two places), Champlain and his party encountered a group of Iroquois. A battle began the next day. Two hundred Iroquois advanced on Champlain's position as a native guide pointed out the three Iroquois chiefs to the French. Champlain fired his arquebus and killed two of them with one shot. One of his men killed the third. The Iroquois turned and fled. This was to set the tone for French-Iroquois relations for the next 100 years.

The Innu of Labrador and those living on the north shore of the Gulf of Saint-Lawrence in the Canadian Shield region have never officially surrendered their territory to Canada by way of treaty or other agreement. As the forest and mining operations began at the turn of the 20th century, the Innu became increasingly settled in coastal communities and in the interior of Quebec. The Canadian and provincial governments, the Catholic, Moravian, and Anglican churches, all encouraged the Innu to settle in more permanent communities, in the belief that their lives would improve with this adaptation. But, with the social disruption and decline of the Innu people's traditional activities (hunting, trapping, fishing), community life in the permanent settlements often became associated with high levels of alcoholism, substance abuse by children, domestic violence and suicide.

In 1999 Survival International published a study of the Innu communities of Labrador. It assessed the impact of the Canadian government's relocating the people far from their ancestral lands and preventing their practising their ancient way of life.[3] Survival International considered these policies to be in violation of international law and drew parallels with the treatment of Tibetans by the People's Republic of China. According to the study, from 1990–1997, the Innu community of Davis Inlet had a suicide rate more than twelve times the Canadian average, and well over three times the rate often observed in isolated northern villages.[3]

The Naskapi Nation of Kawawachikamach, of Quebec, is the only Quebec First Nations community that has signed a comprehensive land claims settlement, the Northeastern Quebec Agreement; they did so in 1978. As a consequence, the Naskapi of Kawawachikamach are no longer subject to certain provisions of the Indian Act. All the Innu communities of Quebec are still subject to the Act.

The New York Power Authority's proposed contract with the province of Quebec to buy power from its extensive hydroelectric dam facilities has generated controversy.[4] According to the Sierra Club:

[t]he "New York Power Authority is in preliminary discussions and considering the liability of a new contract with Hydro-Québec," a Canadian supplier of hydroelectricity.

The Innu community, the Sierra Club, and the National Lawyers Guild are fighting to prevent this proposed contract, which would have to be approved by New York's Governor, under his regulatory authority.[4] The problem is that construction of required electric transmission lines would hinder the Innu's hunting-gathering-fishing lifestyle:

Chief Georges-Ernest Gregoire of the Innu community in Eastern Quebec urged the governor not to proceed with a plan to buy hydroelectric power from Canada, saying the dam complex that would be built would affect the traditional way of life for his people.

— Legislative Gazette (caption for a photo of Chief Gregoire)[4]

Chief Gregoire's comments at a press conference in Albany, New York were translated, but whether from French or Innu-aimun is not clear.[4]

Natuashish and Sheshatshiu, Newfoundland and Labrador

Although Innu have been only in Sheshatshiu since fur trading posts were established by the Hudson's Bay Company in Northwest River in the mid-1700s and only in Davis Inlet/Natuashish since the Moravians set up along the Inuit Coast in 1771, Newfoundland and Labrador Premier Danny Williams struck a deal on September 26, 2008, with Labrador's Innu to permit construction of a hydroelectric megaproject to proceed on the proposed Lower Churchill site. They also negotiated compensation for another project on the Upper Churchill, where large tracts of Actual traditional Innu hunting lands were flooded. 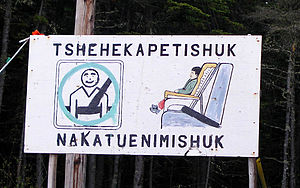 “Buckle up your children” sign in Innu-aimun language, in the Pointe-Parent reserve near Natasquan, Quebec.

Traditional Innu craft is demonstrated in the Innu tea doll. These children's toys originally served a dual purpose for nomadic Innu tribes. When traveling vast distances over challenging terrain, the people left nothing behind. They believed that "Crow" would take it away. Everyone, including young children, helped to transport essential goods. Innu women made intricate dolls from caribou hides and scraps of cloth. They filled the dolls with tea and gave them to young girls to carry on long journeys. The girls could play with the dolls while also carrying important goods. Every able-bodied person carried something. Men generally carried the heavier bags and women would carry young children.

Men wore caribou pants and boots with a buckskin long shirt, all made by women. With the introduction of trade cloth from the French and English, people began replacing the buckskin shirts with ones made of cloth. Most still wore boots and pants made from caribou hide. Women wore long dresses of buckskin and moccasins. Contemporary Innu women have often replaced these with manufactured pants and jackets. Women traditionally wore their hair long or in two coils. Men wore theirs long.

Both genders wore necklaces made of bone and bead. Smoke pipes were used by both genders, marked for women as shorter. If a man killed a bear, it was a sign of joy and initiation into adulthood and the man would wear a necklace made from the bear's claws.

The houses of the Montagnais were cone shaped. The Naskapi made long, domed houses covered in caribou hides. These days the hearth is a metal stove in the centre of the house.

Traditionally, buckskin was a most important material used for clothing, boots, moccasins, house covers and storage. Women prepared the hides and many of the products made from it. They scraped the hides to remove all fur, then left them outside to freeze. The next step was to stretch the hide on a frame. They rubbed it with a mixture of animal brain and pine needle tea to soften it. The dampened hide was formed into a ball and left overnight. In the morning, it would be stretched again, then placed over a smoker to smoke and tan it. The hide was left overnight. The finished hide was called buckskin.

Although Sheshatshiu and Natuashish are home to most of the province's Innu people, some also live at Labrador City, Wabush, Happy Valley-Goose Bay, St. John's, and elsewhere.[5]

The Innu people of Labrador formally organized the Naskapi Montagnais Innu Association in 1976 to protect their rights, lands, and way of life against industrialization and other outside forces. The organization changed its name to the Innu Nation in 1990 and functions today as the governing body of the Labrador Innu. The group has won recognition for its members as status Indians under Canada's Indian Act in 2002 and is currently involved in land claim and self-governance negotiations with the federal and provincial governments.[5]

In addition to the Innu Nation, residents at both Natuashish and Sheshatshiu elect Band Councils to represent community concerns. The chiefs of both councils sit on the Innu Nation's board of directors and the three groups work in cooperation with one another.

The best-known members of the Innu nation are the folk rock duo Kashtin, a popular Canadian folk rock duo in the 1980s and 1990s, and one of the most commercially successful and well-known First Nations musical groups.[6] The band was formed in 1984 by Claude McKenzie and Florent Vollant, two Innu from the Maliotenam reserve in northern Quebec.

The first Innu ever elected to the Canadian House of Commons was Bernard Cleary, a Bloc Québécois MP first elected in the 2004 election.[7]

Two Innu politicians, Peter Penashue of the Conservative Party and Jonathan Genest-Jourdain of the New Democratic Party, were elected to the House of Commons in the 2011 election, following which Penashue, as a member of the governing party caucus, became the first Innu person ever appointed to the Cabinet of Canada.[8]