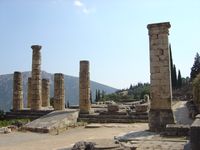 Delphi, the ruins of the Apollo Temple, in whose honor the Pythian Games were held 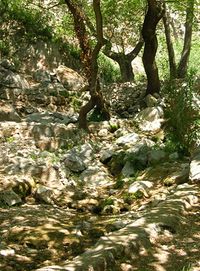 Castalian Spring at the foot of the mountain Mount Parnassus in Delphi. In ancient times, this spring was to Apollon and Muse dedicated

Hymn to Apollo. Photograph of the original stone at Delphi

The Delphic Games of the modern era were inspired by the ancient Greece traditional Pythian Games of Delphi as a symbol for peace. The original Games were between artists and ethnic cultural groups. They took place each year preceding to the Olympic Games. The historic Pythian Games in Delphi can be traced as far back as 2,600 years ago. The spiritual leaders formed the Pan-Hellenic to perform wonders, theatre, music, and poetry to praise the god Apollo of wonderful light, the symbol of the Oracle of Delphi. The Pythian Games were one of the four Panhellenic Games, a forerunner of the modern Olympic Games, held every four years at the sanctuary of Apollo at Delphi.[2]

After the revival of the Olympic Games, art competitions were held from 1912 to 1948 at the initiative of Pierre de Coubertin. Competitions in various forms of art were thematically related exclusively to the sport.

Also in the first half of the 20th century, there was a move to revive the Pythian Games at Delphi, at the initiative by the Greek poet Angelos Sikelianos. In 1927, the Delphic Festival was held for the first time, but the revival was then abandoned due to the cost of organizing it. Delphic Festivals are held in the summer in Delphi, focused largely on tourists.[3]

File:Delphi-logo-2.jpg
Coat of arms of the International Delphic Council, was designed and patented by Christian Kirsch, 1995

The symbols of the International Delphic Movement imitate the symbols of the Olympics. The flag with the Delphic rings that are connected in a circle like a flower, was designed by Christian Kirsch [4] and symbolizes the connection of the six Delphic art categories.

File:Stamp2 Jugenddelphiade Delphischer Weltkongress.jpg
Official stamp of the II Delphic World Congress 1997 in Tbilisi. The stamp shows the emblem of the International Delphic Movement and the Georgian monastery Jvari

The first president of the IDC was Ebun A. Oyagbola of Nigeria, the general secretary and founder is J. Christian B. Kirsch of Germany, and the current president is Divina Bautista of Philippines, in office since 2009.[8][9][10][11]

Founding of the national Delphic organizations

The International Delphic Council (IDC) is the co-ordinator and chief executive body of the worldwide Delphic Network. The member countries will establish[citation needed] national Delphic organisations (council, committee, association, union, etc.) which will coordinate with the IDC to promote and organize the Delphic Games. They receive from the IDC, the confirmation of admission after the official registration in the country.[13][14]

The National Delphic organizations design their own logo, which includes some of the IDC symbols.[17] In preparation of the national qualifications specially designed logos of these national games, which are endorsed by IDC.[18][19]

NDC Korea won the bid to host the third Delphic Games 2009 in Jeju. The decision on the venue of the next Delphic Games will be taken by vote of the members of the IDC Board at an extraordinary meeting.

The national Delphic organization of the host country together with IDC prepare for holding Delphic Games. This initiative has received greetings from Yehudi Menuhin [20] and Elena Obraztsova,[21] among others.

The National Delphic organizations of host countries produce after meeting with the IDC thematic posters, brochures, stamps and other products that are dedicated to the Delphic Games and the IDC Congress.

The National Delphic Council of Russia (NDC Russia) held its founding in December 1998, at conference in Kursk, where Secretary General of the IDC Christian Kirsch participated. 19 March 1999 was NDC Russia at the Ministry of Justice registered, and soon afterwards officially recorded in the International Delphic Council recorded, according to IDC-status.

26 June 2000, the Head of NDC Russia V.Ponyavin turned to the Secretary General of the IDC C. Kirsch, with the request, the first Delphic Games for adult in Moscow from 1 to 10 December 2000 let to hold.[22] This request was granted.

Chronology of the International Delphic Games

The IDC, organize Adult and Junior Delphic Games every four years, two years apart from each other in different countries – the countries having interest to host the games are urge to bid for and it is being decided by the eleven IDC Board Members.

Since 1997 seven international Delphic Games has been organized - three for adult and four for junior. 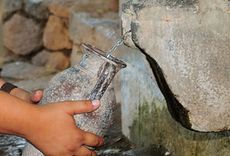 Water ceremony at the Castalian Spring in Delphi / Greece

To the 15th Anniversary of the International Delphic Council (1994–2009) the appearance of a new Delphic ritual was proposed. With water ceremony from the Castalian Spring at Delphi the IDC presents this Holy Water ritual to the hosting country of Delphic Games.[35]

At the opening ceremony of the III Delphic Games 2009 in Jeju, Kim Tae-hwan, Jeju Governor and prominent actress Go Doo-shim, the cultural ambassador of the Jeju Delphic, exhibited a combining ritual in which two waters ― from the Castalian Spring and from the lake on the peak of Mount Hallasan ― were mixed together to celebrate a successful opening.[36][37]

In the future – six months prior to the Games – a Kastalian Spring Water Ceremony will symbolise the count down till the Opening next Delphic Games.[12]

On 14 March 2010 the International Delphic Council organised the Delphic Games during the Grand Finale Show at the ITB Berlin, the world's biggest exhibition in tourism. There was the Feast of Delphic Games under the motto: «Arts and Culture - an experience for all senses».[38] This event corresponds to the UNESCO initiative: «2010 - International Year for the Rapprochement of Cultures».[39]

In a relaxed atmosphere all visitors and exhibitors had the chance to enjoy the Feast of Delphic Games at the Grand Finale Show of ITB Berlin 2010.[40]

In addition to the celebration of the Delphic Games for the ITB Berlin in 2011, an international contest for short documentaries - the Delphic Art Movie Award 2011 - is scheduled. This was initiated by the International Delphic Council.[41][42][43]

Format of the modern Delphic Games

The competitors presents and demonstrate their work traditionally or modern arts to make the programme attractive. The independent experts served as Judges to decide for professional work and take decision for the best price award. The Judges are specialist like art teachers, professional artist and prominent persons.

The most important elements of the Games are artistic competitions the presentations and exhibitions. Exceptional artists will be honoured with special awards of the International Delphic Games such as: