From Infogalactic: the planetary knowledge core
Jump to: navigation, search
Not to be confused with European Council or Council of the European Union.

The Council of Europe (CoE; French: Conseil de l'Europe), founded in 1949, is a regional intergovernmental organisation whose stated goal is to promote human rights, democracy, and the rule of law in its 47 member states, covering 820 million citizens. The organisation is separate from the 28-nation European Union, though sometimes confused with it, in part because they share the European flag. Unlike the European Union, the Council of Europe cannot make binding laws.

Its two statutory bodies are the Committee of Ministers, comprising the foreign ministers of each member state, and the Parliamentary Assembly, composed of members of the national parliaments of each member state. The Commissioner for Human Rights is an independent institution within the Council of Europe, mandated to promote awareness of and respect for human rights in the member states. The Secretary General heads the secretariat of the organisation.

The headquarters of the Council of Europe are in Strasbourg, France. English and French are its two official languages. The Committee of Ministers, the Parliamentary Assembly and the Congress also use German, Italian, and Russian for some of their work. 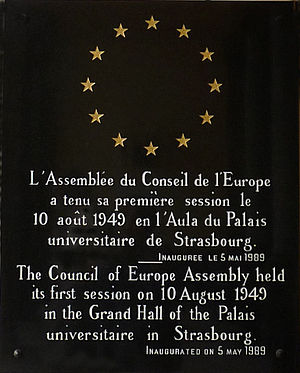 The future structure of the Council of Europe was discussed at a specific congress of several hundred leading politicians, government representatives and civil society in The Hague, Netherlands, in 1948. There were two schools of thought competing: some favoured a classical international organization with representatives of governments, while others preferred a political forum with parliamentarians. Both approaches were finally combined through the creation of the Committee of Ministers and the Parliamentary Assembly under the Statute of the Council of Europe. This dual intergovernmental and inter-parliamentary structure was later copied for the European Communities, North Atlantic Treaty Organization and the Organization for Security and Co-operation in Europe. 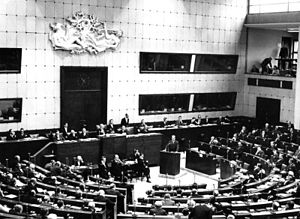 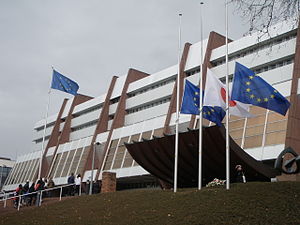 The Council of Europe was founded on 5 May 1949 by the Treaty of London. The Treaty of London or the Statute of the Council of Europe was signed in London on that day by ten states: Belgium, Denmark, France, Ireland, Italy, Luxembourg, the Netherlands, Norway, Sweden and the United Kingdom. Many other states followed, especially after the democratic transitions in central and eastern Europe during the early 1990s, and the Council of Europe now includes all European states except Belarus,[4] Kazakhstan,[4] Vatican City[5] and the European states with limited recognition.[lower-alpha 1]

Article 1(a) of the Statute states that "The aim of the Council of Europe is to achieve a greater unity between its members for the purpose of safeguarding and realising the ideals and principles which are their common heritage and facilitating their economic and social progress." [6] Therefore, membership is open to all European states which seek European integration, accept the principle of the rule of law and are able and willing to guarantee democracy, fundamental human rights and freedoms.

In recent years, the Council of Europe has been criticized for doing too little to stand up to the transgressions of some of its members. Human Rights Watch, for example, argued in September 2014 that Azerbaijan's "systematic crackdown on human rights defenders and other perceived government critics shows sheer contempt for its commitments to the Council of Europe".[12] Similarly, the European Stability Initiative has documented how the Parliamentary Assembly of the Council of Europe in January 2013 voted down a resolution on political prisoners in Azerbaijan, providing a result largely favorable to the authoritarian government of Ilham Aliyev.[13] In 2013 The Economist agreed, saying that the "Council of Europe's credibility is on the line".[14]

Both the Human Rights Watch and the European Stability Initiative have called on the Council of Europe to undertake concrete actions to show that it is willing and able to return to its "original mission to protect and ensure human rights".[15] 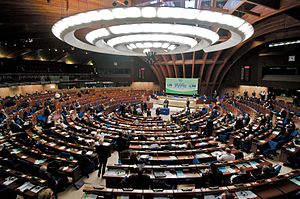 The institutions of the Council of Europe are: 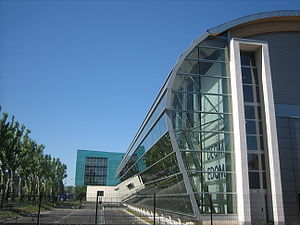 European Directorate for the Quality of Medicines.

The CoE system also includes a number of semi-autonomous structures known as "Partial Agreements", some of which are also open to non-member states: 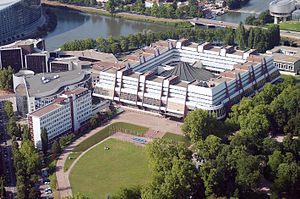 Aerial shot of the Palais de l'Europe in Strasbourg 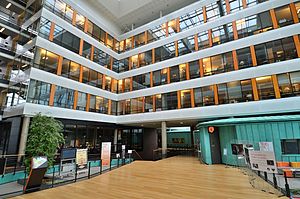 Building in the area started in 1949 with the predecessor of the Palais de l'Europe, the House of Europe (demolished in 1977), and came to a provisional end in 2007 with the opening of the New General Office Building, later named "Agora", in 2008.[18] The Palais de l'Europe (Palace of Europe) and the Art Nouveau Villa Schutzenberger (seat of the European Audiovisual Observatory) are in the Orangerie district, and the European Court of Human Rights, the European Directorate for the Quality of Medicines and the Agora Building are in the Robertsau district. The Agora building has been voted "best international business center real estate project of 2007" on 13 March 2008, at the MIPIM 2008.[19] The European Youth Centre is located in the Wacken district.

Besides its headquarters in Strasbourg, the Council of Europe is also present in other cities and countries. The Council of Europe Development Bank has its seat in Paris, the North-South Centre of the Council of Europe is established in Lisbon, Portugal, and the Centre for Modern Languages is in Graz, Austria. There are European Youth Centres in Budapest, Hungary, and in Strasbourg. The European Wergeland Centre, a new Resource Centre on education for intercultural dialogue, human rights and democratic citizenship, operated in cooperation with the Norwegian Government, opened in Oslo, Norway, in February 2009.[20]

The Council of Europe has offices in Albania, Armenia, Azerbaijan, Bosnia and Herzegovina, Georgia, Moldova, Montenegro, Serbia, and Ukraine; information offices in Albania, Armenia, Azerbaijan, Bulgaria, Czech Republic, Estonia, Georgia, Hungary, Latvia, Lithuania, Moldova, Poland, Romania, Russian Federation, Slovakia, Slovenia, the Republic of Macedonia, and Ukraine; and a projects office in Turkey. All these offices are establishments of the Council of Europe and they share its juridical personality with privileges and immunities.

Due to persistent budgetary shortages, the Council of Europe is expected to cut down significantly the number of its activities, and thus the number of its employees, from 2011 on. This will notably affect the economy of the city of Strasbourg, where a total of 2,321 people (on 1 January 2010) are doing salaried work for the CoE. Most offices in foreign countries are expected to be closed as well.[21]

Main articles: Symbols of Europe and Flag of Europe 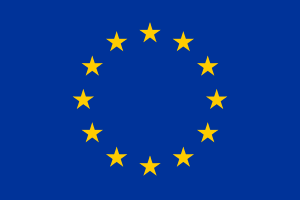 The Council of Europe created and has used as its official symbols the European Flag with 12 golden stars arranged in a circle on a blue background since 1955, and the European Anthem based on the "Ode to Joy" from the final movement of Ludwig van Beethoven's Ninth symphony since 1972.

Although protected by copyright, the wide private and public use of the European Flag is encouraged to symbolise a European dimension. To avoid confusion with the European Union which subsequently adopted the same flag in the 1980s, as well as other European institutions, the Council of Europe often uses a modified version with a lower-case "e" surrounding the stars which is referred to as the "Council of Europe Logo".[22][23]

Main article: Member states of the Council of Europe

The Council of Europe was founded on 5 May 1949 by Belgium, Denmark, France, Ireland, Italy, Luxembourg, the Netherlands, Norway, Sweden and the United Kingdom. Greece and Turkey joined three months later, and Iceland and Germany the next year. It now has 47 member states, with Montenegro being the latest to join.

Article 4 of the Council of Europe Statute specifies that membership is open to any "European" State. This has been interpreted liberally from the beginning (when Turkey was admitted) to include any Eurasian state with a toe-hold in Europe.

Besides the status as a full member, the Council of Europe has established other instruments for cooperation and participation of non-member states: observer, applicant, special guest, partner for democracy.

The Council of Europe works mainly through conventions. By drafting conventions or international treaties, common legal standards are set for its member states. However, several conventions have also been opened for signature to non-member states. Important examples are the Convention on Cybercrime (signed for example, by Canada, Japan, South Africa and the United States), the Lisbon Recognition Convention on the recognition of study periods and degrees (signed for example, by Australia, Belarus, Canada, the Holy See, Israel, Kazakhstan, Kyrgyzstan, New Zealand and the United States), the Anti-doping Convention (signed, for example, by Australia, Belarus, Canada and Tunisia) and the Convention on the Conservation of European Wildlife and Natural Habitats (signed for example, by Burkina Faso, Morocco, Tunisia and Senegal as well as the European Community). Non-member states also participate in several partial agreements, such as the Venice Commission, the Group of States Against Corruption (GRECO), the European Pharmacopoeia Commission and the North-South Centre.

Invitations to sign and ratify relevant conventions of the Council of Europe on a case-by-case basis are sent to three groups of non-member entities:[24] 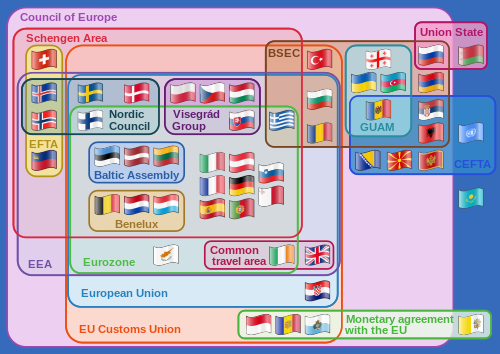 The Council of Europe is an entirely separate body[25] from the European Union. It is not controlled by it.

Cooperation between the European Union and the Council of Europe has recently been reinforced, notably on culture and education as well as on the international enforcement of justice and Human Rights.[26]

The General Agreement on Privileges and Immunities of the Council of Europe grants the European Council certain privileges and immunities.[30]