Klugman began his career in 1950. He later moved on to television and film work with roles in 12 Angry Men (1957) and Cry Terror! (1958). During the 1960s, he guest-starred on numerous television series. Klugman won his first Primetime Emmy Award for his guest-starring role on The Defenders, in 1964. He also made a total of four appearances on The Twilight Zone from 1960 to 1963.

In 1970, Klugman reprised his Broadway role of Oscar Madison in the television adaptation of The Odd Couple, opposite Tony Randall. The series aired from 1970 to 1975. Klugman won his second and third Primetime Emmy Awards and a Golden Globe Award for his work on the series. From 1976 to 1983, he starred in the title role in Quincy, M.E. for which he earned four Primetime Emmy Award nominations. In 1985 he appeared in an episode of The Love Boat entitled "Scandinavian Cruise" parts 1 & 2.

A longtime smoker, Klugman was diagnosed with throat cancer in 1974. The cancer returned in 1989. During the course of treatment, Klugman lost a vocal cord which left him with a raspy voice.

Klugman married actress Brett Somers in 1953. The couple had two children before separating in 1974. They never divorced and were still married when Somers died in 2007. The following year, he married Peggy Crosby, with whom he had lived since 1988.

Klugman was born in Philadelphia, the son of Rose, a hat maker, and Max Klugman, a house painter.[7] His parents were Russian Jewish immigrants. Klugman served in the United States Army during World War II.[8] He attended Carnegie Institute of Technology, now Carnegie Mellon University, in Pittsburgh, Pennsylvania, from which he graduated in 1948.[1] While there, his drama teacher told him, "Young man you are not suited to be an actor. You are suited to be a truck driver."[9] After the war, he pursued acting roles while living in New York City with fellow actor Charles Bronson.[8] 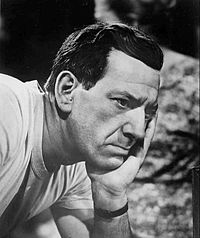 Klugman in a publicity photo for The Twilight Zone, September 1963

During the 1950s and 1960s, Klugman was active in numerous stage, television and film productions. In 1950, he had a small role in the Mr. Roberts road company at the Colonial Theatre in Boston. Later that same year, he made his television debut in an episode of Actors Studio. In March 1952, Klugman made his Broadway debut in Golden Boy, as Frank Bonaparte.

In 1954, he played Jim Hanson on the soap opera, The Greatest Gift.[10] The following year, he appeared in the live television broadcast of Producers' Showcase, in the episode "The Petrified Forest" with Humphrey Bogart and Henry Fonda. Klugman later said the experience was the greatest thrill of his career. Klugman went on to star in several classic films, including 12 Angry Men (1957) as juror #5. Of the 12 actors to play a juror in the film, Klugman was the last survivor. In 1959, he returned to Broadway in the original production of Gypsy: A Musical Fable. In 1960, he was nominated for a Tony Award for Best Featured Actor (Musical) for his role in the show, but lost to Tom Bosley in Fiorello!.[11] He remained with Gypsy until it closed in March 1961.

From 1960 to 1963, Klugman appeared in four episodes of the The Twilight Zone series: "A Passage for Trumpet" (1960), "A Game of Pool" (1961), "Death Ship" (1963), and "In Praise of Pip" (1963). Klugman tied with Burgess Meredith for the most appearances in a starring role on the series. In 1964, Klugman won his first Primetime Emmy Award for his guest starring role on The Defenders. That same year, Klugman landed the starring role in the sitcom Harris Against the World. The series was a part of an experimental block of sitcoms that aired on NBC entitled 90 Bristol Court. Harris Against the World, along with the other sitcoms that aired in the block, were canceled due to low ratings the following year.

Klugman continued the decade with multiple guest roles on television including The F.B.I., Ben Casey, The Name of the Game, and Insight. He also appeared on Broadway in Tchin-Tchin, from October 1962 to May 1963. 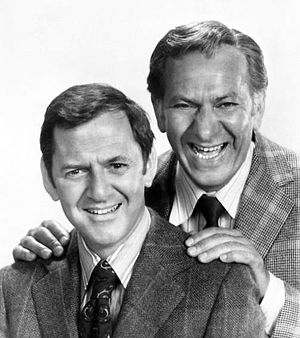 Klugman (right) with Tony Randall in the publicity photo of The Odd Couple, 1972

In 1965, Klugman replaced Walter Matthau in the lead role of Oscar Madison in the original Broadway production of The Odd Couple.[12] He reprised the role when the play was adapted as a television series which premiered on ABC in 1970. Over the course of the show's five-year, 114-episode run, Klugman won two Primetime Emmy Awards for his work on the series. The series ended in 1975.

In 1973, during the run of the show, Klugman and Odd Couple co-star Tony Randall recorded an album titled The Odd Couple Sings for London Records. Roland Shaw and The London Festival Orchestra and Chorus provided the music and additional vocals.[13]

Following the end of The Odd Couple, Klugman returned to television in 1976 in Quincy, M.E. on NBC. Klugman portrayed Dr. Quincy, a forensic pathologist who worked for the Los Angeles County Coroner's Office and solved crimes. He was nominated for four Primetime Emmy Awards for his work on the series and also wrote four episodes. Quincy aired for a total of 148 episodes over seven seasons, ending in 1983.

In 1986, Klugman starred in the sitcom You Again?, co-starring John Stamos as Klugman's character's son. The series aired on NBC for two seasons before being canceled. During the show's run, Klugman also appeared on Broadway in I'm Not Rappaport. The show closed in 1988. The following year, he co-starred in the television miniseries Around the World in 80 Days.

In 1989, Klugman's throat cancer (with which he was first diagnosed in 1974) returned. His illness sidelined his career for the next four years. He returned to acting in a 1993 Broadway revival of Three Men on a Horse.[14] That same year, he reunited with Tony Randall in the television film The Odd Couple: Together Again. The next year, Klugman co-starred in the television film Parallel Lives.

In 1993 he appeared on a special "celebrity versus regulars" version of the British quiz show Going for Gold, emerging as the series winner.[15]

In 1996, he co-starred in The Twilight of the Golds and the comedy film Dear God. He resumed his television career with guest spots on Diagnosis: Murder. He also starred in The Outer Limits episode "Glitch," and appeared in an episode of the TV series Crossing Jordan. In 1997 Klugman starred in the Broadway revival of The Sunshine Boys, his last stage production.

In 2005, Klugman co-starred in the comedy film When Do We Eat?. That same year, he published Tony and Me: A Story of Friendship, a book about his long friendship with his The Odd Couple co-star Tony Randall.[16][17] Klugman gave the eulogy at Randall's memorial service in 2004.[16] Klugman, who liked the same New York Mets whose cap he wore as Oscar Madison, started an MLB.com PRO Blog called Klugman's Korner to talk baseball and Randall. 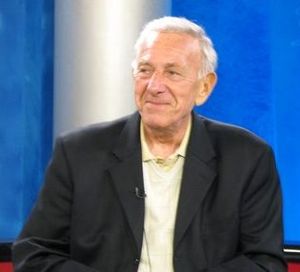 In 2008, he sued NBC Television concerning missing profits from his show Quincy M.E.[18] The lawsuit was filed in California Superior Court, with Klugman requesting NBC to show him the original contract.[18] Klugman stated that his production company, Sweater Productions, should have received 25 percent of the show's net profits. NBC Universal and Klugman settled the lawsuit on undisclosed terms in August 2010.[18] His last on-screen role was in the 2010 horror film Camera Obscura.

Klug's final acting job was in a stage production of Twelve Angry Men at the George Street Playhouse. It opened on March 13, 2012.[19]

Klugman was the father of two children: Adam Klugman (who had a cameo as Oscar Madison as a child in a flashback on The Odd Couple) and David, both from his marriage to Brett Somers. Klugman and Somers were married in 1953 and were legally separated in 1974, although they never divorced. They remained married until her death from cancer in 2007 at age 83.[20]

Klugman was diagnosed with throat cancer in 1974. In 1989, he lost a vocal cord to cancer, but continued to act on stage and television, though he was left with a quiet, raspy voice.[24] In later years subsequent to his operation, he regained limited strength in his voice.

Klugman was an avid thoroughbred racing fan. He owned Jaklin Klugman, who finished third in the 1980 Kentucky Derby behind the great filly Genuine Risk and Grade 1 stakes winner Akinemod. Klugman said Jaklin Klugman's success was the biggest thrill in his life.[25]

Klugman died at the age of 90 in Woodland Hills, California from prostate cancer, on December 24, 2012.[1] The New York Times referred to him and actor Charles Durning, who died the same day, as "extraordinary actors ennobling the ordinary."[27] The Huffington Post compared the two men, calling them "character actor titans."[28]