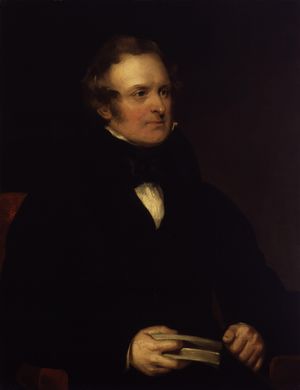 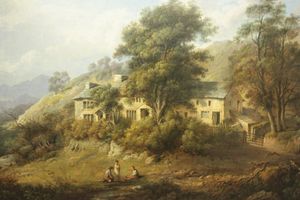 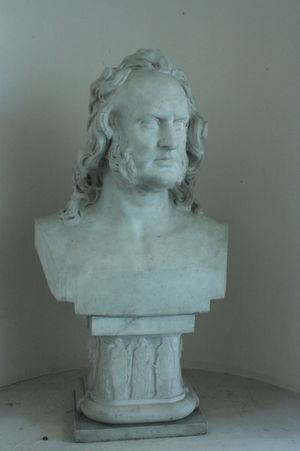 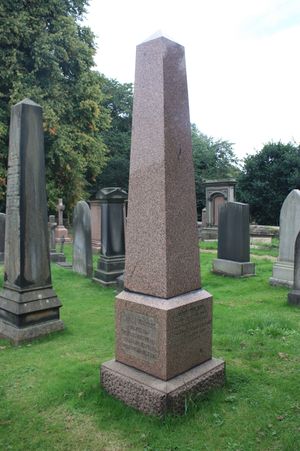 John Wilson of Elleray FRSE (18 May 1785 – 3 April 1854) was a Scottish advocate, literary critic and author, the writer most frequently identified with the pseudonym Christopher North of Blackwood's Edinburgh Magazine.

He was professor of Moral Philosophy at Edinburgh University (1820–51).

John Wilson was born at Paisley, the son of John Wilson, a wealthy gauze manufacturer who died in 1796, when John was eleven years old, and Margaret Syme (1753–1825).[1] He was the fourth child, but the eldest son, and he had nine brothers and sisters. He was only twelve when he entered the University of Glasgow, and continued to attend various classes for six years, mostly under Professor George Jardine, with whose family he lived. During this period Wilson excelled in sport as well as academic subjects, and fell in love with Margaret Fletcher, who was the object of his affections for several years.

In 1803 Wilson was entered as a gentleman commoner at Magdalen College, Oxford. He was inspired by Oxford, and in much of his later work, notably in the essay called "Old North and Young North", he expresses his love for it. But his Magdalen days were not altogether happy, though he obtained a brilliant first class degree. His love affairs did not go happily, his "Margaret" eloped to New York with his younger brother, Charles and he made no close friends at his own college and few in the university. He took his degree in 1807, and at twenty-two was his own master, with a good income, no guardian to control him, and no need to work for a living. Instead, his occupation was an estate on Windermere called Elleray, ever since connected with his name. Here he built, boated, wrestled, shot, fished, walked and amused himself for four years, besides composing or collecting from previous compositions a considerable volume of poems, published in 1812 as The Isle of Palms. He became intimate with William Wordsworth, Samuel Taylor Coleridge, Robert Southey and Thomas de Quincey. 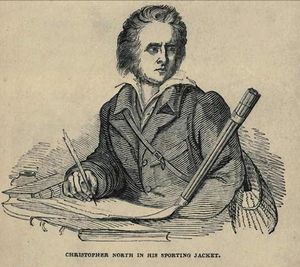 'Christopher North' in his sporting jacket

In 1811 he married Jane Penny, daughter of the Liverpool merchant and slave trader James Penny, and they were happy for four years, until the event which made a working man of letters of Wilson, and without which he would probably have produced a few volumes of verse and nothing more. Most of his fortune was lost by the dishonest speculation of an uncle, in whose hands Wilson had carelessly left it. His mother had a house in Edinburgh, in which she was able and willing to receive her son and his family; he was not forced to give up Elleray, though he was no longer able to live there. 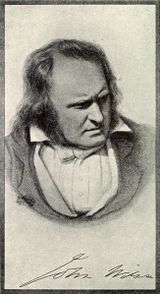 He read law and was elected to the Faculty of Advocates in 1815, still with many outside interests, and in 1816 produced a second volume of poems, The City of the Plague. In 1817, soon after the founding of Blackwood's Magazine, Wilson began his connection with the Tory monthly and in October 1817 he joined with John Gibson Lockhart in the October number working up James Hogg's MS a satire called the Chaldee Manuscript, in the form of biblical parody, on the rival Edinburgh Review, its publisher and his contributors. He became the principal writer for Blackwood's, though never its nominal editor, the publisher retaining supervision even over Lockhart's and "Christopher North's" contributions, which were the making of the magazine.

In 1822 began the series of Noctes Ambrosianae, after 1825 mostly Wilson's work. These are discussions in the form of convivial table-talk, including wonderfully various digressions of criticism, description and miscellaneous writing. There was much ephemeral, a certain amount purely local, and something occasionally trivial in them. But their dramatic force, their incessant flashes of happy thought and happy expression, their almost incomparable fulness of life, and their magnificent humour give them all but the highest place among genial and recreative literature. "The Ettrick Shepherd," an idealised portrait of James Hogg, one of the talkers, is a most delightful creation. Before this, Wilson had contributed to Blackwood's prose tales and sketches, and novels, some of which were afterwards published separately in Lights and Shadows of Scottish Life (1822), The Trials of Margaret Lyndsay (1823) and The Foresters (1825); later appeared essays on Edmund Spenser, Homer and all sorts of modern subjects and authors.

Wilson left his mother's house and established himself (1819) in Ann Street, Edinburgh, with his wife and five children. His election to the chair of Moral Philosophy in the University of Edinburgh (1820) was unexpected, and the best qualified man in the United Kingdom, Sir William Hamilton, was also a candidate. But the matter was made a political one; the Tories still had a majority in the burgh council; Wilson was powerfully backed by friends, Sir Walter Scott at their head; and his adversaries played into his hands by attacking his moral character, which was not open to any fair reproach. Wilson made a very excellent professor, never perhaps attaining to any great scientific knowledge in his subject or power of expounding it, but acting on generation after generation of students with a stimulating force that is far more valuable than the most exhaustive knowledge of a particular topic. His duties left him plenty of time for magazine work, and for many years his contributions to Blackwood were voluminous, in one year (1834) amounting to over fifty separate articles. Most of the best and best known of them appeared between 1825 and 1835.

In his last thirty years, he oscillated between Edinburgh and Elleray, with excursions and summer residences elsewhere, a sea trip on board the Experimental Squadron in the English Channel during the summer of 1832, and a few other unimportant diversions. The death of his wife in 1837 was an exceedingly severe blow to him, especially as it followed within three years that of his friend Blackwood.

John Wilson died at home in Gloucester Place in Edinburgh.

He is buried beneath a large red granite obelisk of simple design on the southern side of Dean Cemetery.

In 1865 a statue by Sir John Steell was erected to his memory in Princes Street Gardens. The bronze figure stands on a substantial stone pedestal and is located between the Royal Scottish Academy and the Scott Monument.