Karakalpakstan (Karakalpak: Qaraqalpaqstan Respublikasiʻ (Қарақалпақстан Республикасы); Uzbek: 'Qoraqalpogʻiston Respublikasi' (Қорақалпоғистон Республикаси) is an autonomous republic of Uzbekistan. It occupies the whole northwestern end of Uzbekistan. The capital is Nukus (Karakalpak: Noʻkis (Нөкис)). The Republic of Karakalpakstan has an area of 160,000 square kilometres (62,000 sq mi). Its territory covers the classical land of Khwarezm, though in classical Persian literature the area was known as "Kāt" (کات).

From about 500 BC to 500 AD, the region of Karakalpakstan was a thriving agricultural area supported by extensive irrigation.[5] The Karakalpak people, who were formerly nomadic herders and fishers, were first recorded in the 16th century.[3] Karakalpakstan was ceded to the Russian Empire by the Khanate of Khiva in 1873.[6] Under Soviet rule, it was originally an autonomous area within Kazakhstan before becoming part of Uzbekistan in 1936.[4] The region was probably at its most prosperous in the 1960s and 1970s when irrigation from the Amu Darya was being expanded. Today, however, the drainage of the Aral Sea has rendered Karakalpakstan one of Uzbekistan's poorest regions.[3] The region is suffering from extensive drought, partly due to weather patterns, but also largely because the Amu and Syr Darya rivers are exploited mostly in the eastern part of the country. Crop failures have deprived about 48,000 people of their main source of income and shortages of potable water have created a surge of infectious diseases.[7]

The republic of Karakalpakstan is formally sovereign and shares veto power over decisions concerning it with Uzbekistan. According to the constitution, relations between Karakalpakstan and Uzbekistan are "regulated by treaties and agreements" and any disputes are "settled by way of reconciliation". Its right to secede is limited by the veto power of Uzbekistan's legislature over any decision to secede.[2]

The population of Karakalpakstan is estimated to be around 1.7 million,[9] and in 2007 it was estimated that about 400,000 of the population are of the Karakalpak ethnic group, 400,000 are Uzbeks, and 300,000 are Kazakhs.[3] Their name means "Black Hat", but Karakalpak culture was so lost through Sovietization that the original meaning of the black hat is now unknown[verification needed]. The Karakalpak language is considered closer to Kazakh than to Uzbek.[10] The language was written in a modified Cyrillic in Soviet times and in the Latin alphabet since 1996.

The economy of the region, formerly heavily dependent on fisheries in the Aral Sea, is now supported by cotton, rice and melons. Hydroelectric power from a large Soviet-built station on the Amu Darya is also important.

The Amu Darya delta was once heavily populated, and supported extensive irrigation based agriculture for thousands of years. Under the Khorezm, the area attained considerable power and prosperity. However, the gradual climate change over the centuries, accelerated by human induced evaporation of the Aral Sea in the late 20th century has created a desolate scene in the region. The ancient oases of rivers, lakes, reed marshes, forests and farms are drying up and being poisoned by wind-borne salt as well as fertilizer and pesticide residues from the dried bed of the Aral Sea. Summer temperatures have risen 10 °C (18 °F) and winter temperatures have decreased by 10 °C (18 °F). The rate of anemia, respiratory diseases, and other health problems has risen dramatically.[11] 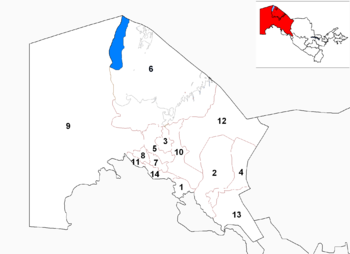 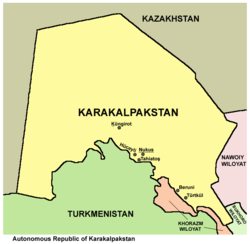 In 2009, the first radio station of Karakalpakstan was opened. The station is called Nukus FM, which broadcasts on radiowave 100.4 MHz and only in Nukus. The radio doesn't broadcast online, but one can listen to the samples online on the music website of Karakalpakstan.[12]