From Infogalactic: the planetary knowledge core
Jump to: navigation, search
For the medieval border-guards of the Kievan Rus, see Chorni Klobuky.
Not to be confused with Qarapapaqs.

i/ˈkærəlkəlpɑːks, -pæks/; Karakalpak: Qaraqalpaqlar, қарақалпақлар) are a Turkic people who primarily live in Uzbekistan. During the 18th century, they settled in the lower reaches of the Amu Darya and in the (former) delta of Amu Darya on the southern shore of the Aral Sea.[1] The name "Karakalpak" comes from two words: "qara" meaning black, and "qalpaq" meaning hat. The Karakalpaks number nearly 620,000 worldwide, out of which about 500,000 live in the Uzbek Republic of Karakalpakstan.

File:Karakalpaki.jpg The Karakalpak population is mainly confined to the central part of Karakalpakstan that is irrigated by the Amu Darya. The largest communities live in Nukus, the capital of Karakalpakstan, and the surrounding large towns, such as Khodzheli, Shimbay, Takhtaitash, and Kungrad. Rural Karakalpaks mainly live on former collective or state farms, most of which have been recently privatised. 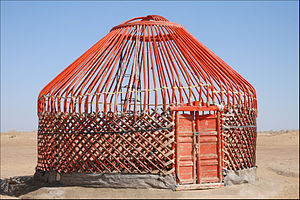 A frame of traditional Karakalpak yurt or qara u'y.

Many rural Karakalpaks have been seriously affected by the desiccation of the Aral Sea, which has destroyed the local fishing industry along with much of the grazing and agricultural land in the north of the delta. Karakalpaks have nowhere to go. The majority of Karakalpakstan is occupied by desert - the Kyzyl Kum on the eastern side, the barren Ustyurt plateau to the west, and now the growing Aral Kum to the north, once the bed of the former Aral Sea.

Although their homeland bears their name, the Karakalpaks are not the largest ethnic group living in Karakalpakstan. They are increasingly being outnumbered by Uzbeks, many of whom are being encouraged to move into the rich agricultural region around Turtkul and Beruni.

The Karakalpak language belongs to the Kipchak-Nogai group of Turkic languages, which also includes Kazakh and Nogai.

Due to the geography and history of the Karakalpak people, Karakalpak has been influenced by Uzbek, Tajik, and Russian. A Karakalpak-Uzbek pidgin language is often spoken by those bilingual in both languages.

The word Karakalpak is derived from the Russian Cyrillic spelling of their name and has become the accepted name for these people in the West. The Karakalpaks actually refer to themselves as Qaraqalpaqs, whilst the Uzbeks call them Qoraqalpogs. The word means "black hat" and has caused much confusion in the past, since historians linked them with other earlier, who have borne the appellation "black hat" in Slavic vernacular. Many accounts continue to link the present day Karakalpaks with the Slavic Cherniye Klobuki of the 11th century, whose name also means "black hat" in Russian. Cherniye Klobuki were mercenary military troops of the Kievan Rus. Apart from the fact that their names have the same meaning, there is no archaeological or historical evidence to link these two groups. The Qaraqul hat is made from the fur of the Qaraqul breed of sheep which originated in Central Asia with archaeological evidence pointing to the breed being raised there continuously since 1400 BCE. The breed is named after Qorako‘l which is a city in Bukhara Province in Uzbekistan.

Recent archaeological evidence indicates that the Karakalpaks may have formed as a confederation of different tribes at some time in the late 15th or the 16th centuries at some location along the Syr Darya or its southern Zhany Darya outlet, in proximity to the Kazakhs of the Lesser Horde. This would explain why their language, customs and material culture are so similar to that of the Kazakhs.

Karakalpaks are primarily followers of the Hanafi School of Sunni Islam. It is probable they adopted Islam between the 10th and 13th centuries, a period when they first appeared as a distinct ethnic group.

Dervish orders such as the Naqshbandi, Kubrawiya, Yasawi and Qalandari are fairly common in this region. The religious order that established the strongest relation with the people of the region is the Kubrawiya, which has Shi'i adherents.

Although there were 553 mosques in the year of 1914, there are not so many mosques left today. The mosques that are present are located in Nukus, Törtkül, Hocaeli and Çimbay.