Kenjutsu (剣術?) is the umbrella term for all (koryū) schools of Japanese swordsmanship, in particular those that predate the Meiji Restoration. The modern styles of kendo and iaido that were established in the 20th century included modern form of kenjutsu in their curriculum, too.[1] Kenjutsu, which originated with the samurai class of feudal Japan,[2] means "the method, or technique, of the sword." This is opposed to kendo, which means "the way of the sword".[3]

The exact activities and conventions undertaken when practicing kenjutsu vary from school to school, where the word school here refers to the practice, methods, ethics, and metaphysics of a given tradition, yet commonly include practice of battlefield techniques without an opponent and techniques whereby two practitioners perform kata (featuring full contact strikes to the body in some styles and no body contact strikes permitted in others).[4] Historically, schools incorporated sparring under a variety of conditions, from using solid wooden bokutō to use of bamboo sword (shinai) and armor (bōgu).[3]:XII, XIII In modern times sparring in Japanese martial art is more strongly associated with kendo.[citation needed]

It is thought likely that the first iron swords were manufactured in Japan in the fourth century, based on technology imported from China via the Korean peninsula.[5]:1 While swords clearly played an important cultural and religious role in ancient Japan,[5]:5, 14 in the Heian period the globally recognised curved Japanese sword was developed and swords became important weapons and symbolic items.[5]:15 The oldest schools in existence today arose in the Muromachi period (1336 to 1573), known for long periods of inter-state warfare. Three major schools emerged during this period.[3]:XII

These schools form the ancestors for many descendent styles, for example, from Ittō ryū has branched Ono-ha Ittō ryū and Mizoguchi-ha Ittō-ryū (among many others).

On the island of Okinawa, the art of Udundi includes a unique method of both Kenjutsu and Iaijutsu. This is the only surviving sword system from Okinawa. It was the martial art of the noble Motobu family during the Ryukyu Kingdom.[citation needed]

During the Edo period schools proliferated to number more than 500,[3]:XIII and training techniques and equipment advanced. The 19th century led to the development of the bamboo practice sword, the shinai, and protective armor, bogu. This allowed practice of full speed techniques in sparring, while reducing risk of serious harm to the practitioner.[6] Before this, training in Kenjutsu had consisted mainly of basic technique practice and paired kata, using solid wooden practice swords (bokutō) or live blades.[3]:XIII

Beginning in 1868, the Meiji Restoration led to the breakup of the military class and the modernization of Japan along the lines of western industrial nations. As the samurai class was officially dissolved at this time, kenjutsu fell into decline, an unpopular reminder of the past.[3]:XIII, XIV This decline continued for approximately 20 years, until rising national confidence led to an increase of the uptake of traditional sword arts again, particularly in the military and the police.

In 1886 the Japanese Police gathered together kata from a variety of kenjutsu schools into a standardised set for training purposes.[7]:11 This process of standardization of martial training continued when, in 1895, a body for martial arts in Japan, the Dai Nippon Butoku Kai, was established. Work on standardizing kenjutsu kata continued for years, with several groups involved[7]:11,12 until in 1912 an edict was released by the Dai Nippon Butoku Kai. This edict highlighted a lack of unity in teaching and introduced a standard core teaching curriculum to which the individual kenjutsu schools would add their distinctive techniques. This core curriculum, and its ten kata evolved into the modern martial art of kendo.[7]:11,14 This point could be regarded as the end of the development of Kendo Kata was provided for the unification of many schools to enable them to pass on the techniques and spirit of the Japanese sword.[8] 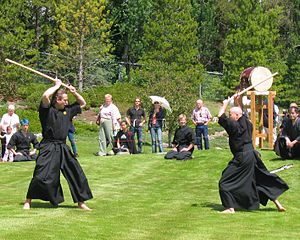 One of the more common training weapons is the wooden sword (bokuto or bokken). For various reasons, many schools make use of very specifically designed bokuto, altering its shape, weight and length according to the style's specifications. For example, bokuto used within Yagyū Shinkage-ryū are relatively thin and without a handguard in order to match the school's characteristic approach to combat. Alternatively, Kashima Shin-ryū practitioners use a thicker than average bokuto with no curvature and with a rather large hilt. This of course lends itself well to Kashima Shin-ryū's distinct principles of combat.

Some schools practice with fukuro shinai (a bamboo sword covered with leather or cloth) under circumstances where the student lacks the ability to safely control a bokuto at full speed or as a general safety precaution. In fact, the fukuro shinai dates as far back as the 15th century. 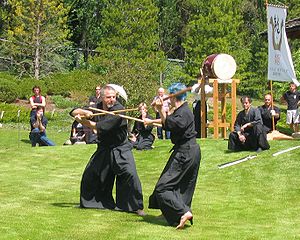 An example of modern nitōjutsu practice.

A distinguishing feature of many kenjutsu syllabi is the use of a paired katana or daitō and wakizashi or shōtō commonly referred to as nitōjutsu (二刀術, two sword methods?). Styles that teach it are called nitōryū (二刀流, two sword school?); contrast ittō-ryū (一刀流, one sword school?).

The most famous exponent of nitōjutsu was Miyamoto Musashi (1584 – 1645), the founder of Hyōhō Niten Ichi-ryū, who advocates it in The Book of Five Rings. Nitōjutsu is not however unique to Hyoho Niten Ichi-ryū, nor was nitōjutsu the creation of Musashi. Both Tenshin Shōden Katori Shinto-ryū were founded in the early Muromachi period (ca. 1447), and Tatsumi-ryu founded Eishō period (1504–1521), contain extensive two-sword curricula while also preceding the establishment of Musashi’s school.[9]