The Emirate of Granada (Arabic: إمارة غرﻧﺎﻃﺔ‎‎, trans. Imarat Gharnāṭah), also known as the Nasrid Kingdom of Granada (Spanish: Reino Nazarí de Granada), was an emirate established in 1238 following the defeat of Muhammad an-Nasir of the Almohad dynasty by an alliance of Christian kingdoms at the Battle of Las Navas de Tolosa in 1212. After Prince Idris left Iberia to take the Almohad leadership, the ambitious Mohammed I ibn Nasr established the last Muslim dynasty on the Iberian peninsula—the Nasrids. The Nasrid emirs were responsible for building the Alhambra palace complex as we know it today. By 1250, the Emirate was the last part of the Iberian peninsula held by the Muslims. Andalusian Arabic was the official language[dubious – discuss], and mother tongue of the majority of the population. For two more centuries, the region enjoyed considerable cultural and economic prosperity.

With the Reconquista in full swing after the conquest of Córdoba in June 1236, Mohammed I ibn Nasr aligned Granada with Ferdinand III of Castile in 1238, thereby creating a tributary state, or taifa, under the Crown of Castile. Granada remained a tributary state for the next 250 years, with Nasrid emirs paying tribute to Castilian kings mostly in the form of gold from present-day Mali and Burkina Faso that was carried to Iberia through the merchant routes in the Sahara. The Nasrids also provided military assistance to Castile for its conquest of areas under Muslim control, most notably Seville in November 1248 and the Taifa of Niebla in 1262.[citation needed].

In 1305, Granada conquered Ceuta, but lost control of the city in 1309 to the Kingdom of Fez with the assistance of the Crown of Aragon. Granada re-captured Ceuta a year later, but again lost it in 1314. Granada again held the city from 1315 to 1327. In 1384, Granada again re-took Ceuta but lost it definitively in 1415.

Granada's peace with Castile broke down on various occasions. Granada lost territory to Castile at the Battle of Teba in 1330. In 1340, Granada under Yusuf I supported the failed Marinid invasion of the Iberian Peninsula, which ended at the Battle of Río Salado.

Granada's status as a tributary state and its favorable geographic location, with the Sierra Nevada (Spain) as a natural barrier, helped to prolong Nasrid rule and allowed the Emirate to prosper as a regional entrepôt with the Maghreb and the rest of Africa. In fact, Granada was a prosperous city during the Crisis of the Late Middle Ages when much of Europe stagnated. The city of Granada was one of the largest cities during this time: it accepted numerous Muslim refugees expelled from Christian controlled areas, doubling the size of the city[1] and even becoming the largest city of Europe in 1450 in terms of population.[2] Granada also served as a refuge for Muslims fleeing during the Reconquista. Regardless of its comparative prosperity, intra-political strife was constant. Skirmishes along the border of Granada occurred frequently and territory was gradually lost to Castile. 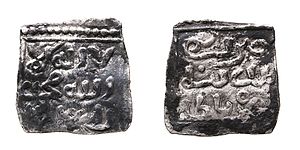 Silver coin minted by the emirate of Granada.

Granada was tightly integrated in Mediterranean trade networks and heavily financed by Genoese bankers aiming to gain control of the gold trade carried in through Saharan caravan routes.[3] However, after Portugal opened direct trade routes to Sub-Saharan Africa by sea in the 15th century, Granada became less important as a regional commercial center. With the union of Castile and Aragon in 1469, these kingdoms set their sights on annexing Granada.

The war of Granada would offer an opportunity for Ferdinand and Isabella to harness the restless Castilian nobility against a common enemy and instill subjects with a sense of loyalty to the crown.[4] The Emirate's attack on the Castilian frontier town of Zahara in December 1481.[4] The Granada War began in 1482, with Christian forces capturing Alhama de Granada in February 1482. This marked the beginning of a grinding 10-year war. The Christian force was made up of troops provided by Castilian nobles, towns, and the Santa Hermandad, as well as Swiss mercenaries.[5] The Catholic Church also encouraged other Christian countries to offer their troops and their finances to the war effort. Meanwhile, civil war erupted in Granada as a result of succession struggles in the Nasrid ruling house. Castile used this internal strife as an opportunity to push further into Granada. By 1491, the city of Granada itself lay under siege. On November 25, 1491, the Treaty of Granada was signed, setting out the conditions for surrender. On January 2, 1492, the last Muslim leader, Muhammad XII, known as Boabdil to the Spanish, gave up complete control of Granada, to Ferdinand and Isabella, Los Reyes Católicos ("The Catholic Monarchs").

The Christian ousting of Muslim rule on the Iberian Peninsula with the conquest of Granada did not extinguish the spirit of the Reconquista. Isabella urged Christians to pursue a conquest of Africa.[6] About 200,000 Muslims are thought to have emigrated[dubious – discuss] to North Africa after the fall of Granada. Initially, under the conditions of surrender, the Muslims who remained were guaranteed their property, laws, customs, and religion[according to whom?][dubious – discuss]. Following an uprising in 1500, these rights were withdrawn and Muslims in the area was given the choice of expulsion or conversion. In 1568–1571, the descendants of the converted Muslims revolted again, leading to their expulsion from the former Emirate to North Africa and Anatolia.

For Jews as well, at the end of the 15th century a prosperous period with relative religious tolerance came to an end.[dubious – discuss]