From Infogalactic: the planetary knowledge core
Jump to: navigation, search
For other uses, see Kufa (disambiguation).

Along with Samarra, Karbala, Kadhimiya and Najaf, Kufa is one of five Iraqi cities that are of great importance to Shiite Muslims. The city was the final capital of Ali ibn Abu Talib, and was founded during 639 AD and 17 Hijra by the second Rashidun Caliph Umar ibn Al-Khattab.[1] It is also related that, Muslims after conquest of Al-Madain were searching to have a suitable place for habitation. Likewise others, Salman and Hudhayfa bin al-Yamman were also looking for. Just choosing the land they offered prayers there. Since that day the foundation of Kufa had taken place.[2]

The city contains the Great Mosque of Kufa, one of the earliest mosques in Islam, built in the 7th century. The town has produced several Shiite Muslim scholars.[3] 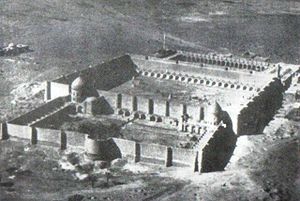 The Arabs, led by Caliph ʻUmar ibn Khattāb, conquered Iraq and began ruling Suristan around 637. Umar, who assigned the land of the Jews in Arabia to his warriors, ordered the relocation of the Jews of Khaybar to a strip of land in Kufa in 640.[4]

ʻUmar ibn Khattāb became the second caliph in 634. After the Arab victory against the East Roman Empire at Battle of Yarmouk in 636, Kūfah was founded and given its name in 637–638 CE, about the same time as Basra. The Companion of the Prophet Saʻd ibn Abī Waqqas founded it as an encampment adjacent to the Lakhmid Arab city of al-Hīrah, and incorporated it as a city of seven divisions. Non-Arabs knew the city under alternate names: Hīrah and Aqulah, before the consolidations of ʻAbdu l-Mālik in 691.[5]

In the 640s, the Kūfan commons agitated that the Caliph ʻUmar's governor was distributing the spoils of war unfairly. In 642 ʻUmar summoned Saʻd to Medina with his accusers. Despite finding Sa'd to be innocent, ʻUmar deposed Saʻd to avert ill feelings.

While this was going on, the Arabs were continuing their conquest of western Persia under Uthman ibn hakam from Tawwaj, but late in the 640s these forces suffered setbacks.

Uthman in 650 reorganised the Iranian frontier; both Basra and Kufa received new governors (Sa'id ibn al-A'as in Kufa's case), and the east came under Basra's command while north of that remained under Kufa's. The few but noticeable trouble makers in Kufa sought in 654 and had Sa'ed deposed Sa'id and instead showed satisfaction with the return of Abu Musa, which Uthman approved seeking to please all.

Kufa remained a source of instigations albeit from a minority. In 656 when the Egyptian instigators, in co-operation with those in Kufa, marched onto the Caliph Uthman in Medina, Abu Musa counselled the instigators to no avail.

Capital of Imam Ali, the rightful successor of the Holy Prophet (656)

Upon Uthman's assassination by rebels, governor Abu Musa attempted to restore a non-violent atmosphere in Kufa. The Muslims in Medina and elsewhere supported the right of Ali ibn Abu Talib to the caliphate. In order to manage the Military frontiers more efficiently, Ali shifted the capital from Medina to Kufa.

The people of Syria and their Governor, Muawiyah, who seized the Caliphate for himself and his family by using the confusion caused by the assassination of Caliph Uthman and being disturbed by the brutal assassination of the Caliph Uthman, demanded retribution. As Muawiyah mounted his campaign to hold Ali responsible for the murder of Uthman, factions developed. In an already emotionally charged atmosphere, Muawiyah's refusal to give allegiance to Ali as the Caliph without Ali avenging Uthman first eventually, led to war.

While praying in the Great Mosque of Kufa, Ali was attacked by the Khawarij Abd-al-Rahman ibn Muljam. He was wounded by ibn Muljam's poison-coated sword while prostrating in the Fajr prayer.

Muawiyah appointed Ziyad ibn Abihi as the Governor of Kufa. After the death of Mughirah in Kufa and of Hasan in Medina, some, such as Hujr ibn Adi, who were previously unhappy with Hasan's peace treaty with Muawiyah, now became increasingly noticeable creating a movement of rebellion against yet another Caliph. The new Governor, Ziyad ibn Abihi, was equally firm and up to the challenge posed by the rebels among the Kufans.

Throughout the Umayyad era, as was the case since the inception of the City by Umar ibn Khattab, there were those among Kufa's inhabitants who were rebellious against the ruling Caliph be that Ali himself or an Umayyad Caliph. Kufans turned to Husayn ibn ‘Alī, grandson of the prophet, as their leader after the death of Muawia, but Yazid the self-proclaimed Caliph formed an army which massacred Husayn ibn ‘Alī and his family and companions in the battle of karbala. With a history of assassinations, rebellions were dealt with firmly such as those by Al-Mukhtar (on behalf of Ibn al-Hanifiya). Many Kufans also supported the mutiny of ‘Abd al-Rahman ibn Muhammad ibn Ash‘ath in 699–702 against al-Hajjaj but were defeated by al-Hajjaj. Some say, the Governors of Kufa or Basra, from Ziyad ibn Abihi to his son, Ubaydullah ibn Ziyad, to al-Hajjaj, were understandably firm given the frequent uprisings and assassinations (e.g. of Ali). However, it cannot be denied that al-Hajjaj, and before him, Ubaydullah ibn Ziyad ibn Abihi, were indeed very severe, and even cruel, against the rebels of Kufa especially and of Basra to a lesser extent.

In 749, the Abbasids under al-Hasan ibn Qahtaba took Kufa and made it their capital. In 762, they moved their seat to Baghdad. Under the Umayyad and early Abbasid decades, Kufa's importance gradually shifted from caliphal politics to Islamic theory and practice.

Kufa in Islamic theology and scholarship

Wael Hallaq notes that by contrast with Medina and to a lesser extent Syria, in Iraq there was no unbroken Muslim or Ishmaelite population dating back to the prophet Muhammad's time. Therefore Maliki (and Azwa'i) appeals to the practice (amal) of the community could not apply. Instead the people of Iraq relied upon those Companions of the Muhammad who settled there, and upon such factions from the Hijaz whom they respected most. A primary founder of a Sunni school of thought, Abu Hanifa, was a Kufan who had supported the Zaydi Revolt in the 730s; and his jurisprudence was systematised and defended against non-Iraqi rivals (starting with Malikism) by other Kufans, such as al-Shaybani.

Shirazi[disambiguation needed]'s "Tabaqat", which Hallaq labels "an important early biographical work dedicated to jurists", covered 84 "towering figures" of Islamic jurisprudence; to which Kufa provided 20. It was therefore a center surpassed only by Medina (22), although Basra came close (17). Kufans could claim that the more prominent of Muhammad's Companions had called that city home: not only Ibn Abu Waqqas, Abu Musa, and Ali; but also Abd Allah ibn Mas'ud, Salman the Persian, Ammar ibn Yasir, and Huzayfa ibn Yaman. Among its jurists prior to Abu Hanifa, Hallaq singles out Sa'id ibn Jubayr, Ibrahim al-Nakha‘i, and Hammad ibn Abi Sulayman; and considers Amir al-Sha‘bi a pioneer in the science of judicial precedent.

Additionally, Shi'a Imams like Muhammad al-Baqir and his son Jafar al-Sadiq made decisions from Medina that contributed to the law of Kufa; and to this day Shi‘ite law follows their example. Abu Hanifa too learnt from al-Baqir and especially al-Sadiq. As a result, while Hanafi school is doctrinally Sunni, in practical terms Hanafi law is closer to Imami law than either is to the other schools of jurisprudence i.e. of Malik, Shafi‘i, and Ibn Hanbal[citation needed].

Kufa was also among the first centers of Qur'anic interpretation, which Kufans credited to the exegete Mujahid (until he escaped to Mecca in 702). It further recorded general traditions as Hadith; in the 9th century, Yahya ibn ‘Abd al-Hamid al-Himmani compiled many of these into a Musnad.

Given Kufa's opposition to Damascus, Kufan traditionists had their own take on Umayyad history. The historian Abu Mikhnaf al-Azdi (d. 774) compiled their accounts into a rival history, which became popular under Abbasid rule. This history does not survive but later historians like Tabari quoted from it extensively.

Kufa is also where the kufic script was developed, the earliest script of the Arabic language. As the scholar al-Qalqashandi maintained, "The Arabic script [khatt] is the one which is now known as Kufic. From it evolved all the present hands." The angular script which later came to be known as Kufic had its origin about a century earlier than the founding of the town of Kufa, according to Moritz in the Encyclopaedia of Islam. The kufic script was derived from one of the four pre-Islamic Arabic scripts, the one called al-Hiri (used in Hira). (The other three were al-Anbari (from Anbar), al-Makki (from Mecca) and al-Madani (from Medina)). The famous author of the Kitab al-Fihrist, an index of Arabic books, Ibn al-Nadim (died ca. 999), was the first to use the word 'kufic' to characterize this script, which reached a state of decorative perfection in the 8th century, when surahs were used to decorate ceramics, for representations of nature were strictly forbidden under the Islamic regime.

In the first decades of Islam, Kufa was prominent in literacy and politics, it was founded before Uthman (whom Ibn Shihab al-Zuhri among others credited with the canonisation of the Qur'an's text), and it was opposed to the central authorities of Medina and Damascus. From the perspective of 8th-century CE (2nd-century AH) Medina and Damascus, Kufa was associated with "variant" readings and interpretations of the Qur'an, typically in the name of Ibn Mas'ud and often (it was claimed) read from the pulpit as if they were part of the Qur'an itself. It became said that Uthman had sent an exemplar of the text to Kufa, but that it was burnt during the wars of Mukhtar and Ibn Zubayr. Al-Hajjaj restored or at any rate promulgated the standard text under Abd al-Malik, castigating even the memory of Abd Allah ibn Mas'ud as "Ibn Umm Abd (son of a slave's mother)". But a faction in Kufa preserved the readings "of ‘Abd Allah / Ibn Mas‘ud", whence Mujahid and his fellow mujtahids compiled them along with other readings and interpretations. From there these readings entered the vast repository of Near Eastern hadith, ultimately to be written down into collections of hadith and tafsir.

Kufa began to come under constant attack in the 11th century and eventually shrunk and lost its importance. Over the last century, the population of Kufa has begun to grow again. It continues to be an important pilgrimage site for Shi‘ite Muslims.

Presently, Kufa and Najaf have joined into a single urban area that is mostly commonly known to the outside world simply as Najaf.

The Great Mosque of Kufa or Masjid al-Kūfa (Arabic: مسجد الكوفة المعظم‎‎), or "Masjid al-Aazam" located in Kūfa, Iraq, is one of the earliest mosques in Islam. It was constructed in the middle of the 7th century after the Caliph Omar established the city. The mosque contains the remains of Muslim ibn ‘Aqīl—first cousin of Husayn ibn ‘Alī, his companion Hānī ibn ‘Urwa, and the revolutionary Mukhtār al-Thaqafī.

Masjid al-Kufa in Kūfā, Iraq—contains the tombs of Muslim ibn ‘Aqīl, Hānī ibn ‘Urwa, and Mukhtār al-Thaqafī. The Mosque also contains many important sites relating to the Prophets and ‘Alī, including the place where he was fatally struck on the head while in Sujood

The tomb of Zayd ibn ‘Alī in Kūfā, Iraq

Masjid al-Hannaanah in Kūfā, Iraq—contains some of the skin of Husayn ibn ‘Alī which was ripped off of him post-mortem by the aggressors of Karbalā.

The House of ‘Alī in Kūfā, Iraq

The final Imām, considered to be alive and in occultation, has the Masjid al-Sahlah associated with him.