From Infogalactic: the planetary knowledge core
Jump to: navigation, search
Not to be confused with Llanelly in Monmouthshire.
For other uses, see Llanelli (disambiguation).

Llanelli ("St Elli's Parish"; Welsh pronunciation: [ɬaˈnɛɬi]), the largest town in both the county of Carmarthenshire and the preserved county of Dyfed, Wales, sits on the Loughor estuary on the West Wales coast, approximately 10 miles (16 km) west-northwest of Swansea and 12 miles (19 km) south-east of the county town, Carmarthen. The town is famous for its proud rugby tradition and is a centre of tinplate production.[3]

In the mid-20th century, Llanelli was the largest town in the world where more than half the population spoke a Celtic language.[4] It is ranked the 7th largest urban area in Wales. According to the 2011 UK Census returns, 23.7% of Llanelli town residents could speak the Welsh language.

Llanelli is surrounded by a number of villages and communities in the Llanelli Rural district. Some of these communities, especially ones that immediately surround the town, are often unofficially referred to as Llanelli.[5]

The spelling 'Llanelly' is an anglicised form which was used until 1966, after which it was changed following a local public campaign. This is evident in the name of the local historic building, 'Llanelly House'. It can also lead to confusion with the village and parish, Llanelly, which is in south-east Wales near Abergavenny.

The town lies on the River Lliedi, although much of the river is not visible, most especially in the town centre, where the river is underneath the town.

Historically a mining town, Llanelli grew significantly in the 18th century and 19th century with the mining of coal and later the tinplate industry and steelworks. Many of these industries were served by the Llanelly and Mynydd Mawr Railway which opened in 1803.

Llanelli became such a significant regional producer of tin that it was referred to as "Tinopolis" by the latter half of the 19th century. The closure of coal mines and competition from overseas steel plants meant that Llanelli, like many other towns in southern Wales, saw significant and sustained economic decline from the late 1970s.

People from Llanelli are sometimes nicknamed "Turks". The origin of this name is uncertain. One theory is that many Turkish sailors once called at the port of Llanelli during their voyages.[6]

During the 1950s, Trefor and Eileen Beasley campaigned to get Llanelli Rural Council to distribute tax papers in Welsh by refusing to pay taxes until their demand was met. The council reacted by sending in the bailiffs and selling their furniture to recover the money owed. The Beasleys' neighbours bought the furniture and returned it to them. The council finally reversed this policy during the 1960s when they accepted that the Welsh language should be equal with the English language.

The area around Llanelli in eastern Carmarthenshire is home to a number of manufacturing companies (including the Tata Steel Europe tinplate works at Trostre, and Dyfed Steels), many of which service the automotive industry.[8] The Technium Performance Engineering Centre was developed at Llanelli Gate as a business incubator for businesses in the automotive, motorsport and aerospace sectors.[9]

The traditional industries of Llanelli have been in gradual decline over recent decades and local government has responded by promoting developments such as the Machynys Golf Course, new retail parks at Trostre and Pemberton, and the Millennium Coastal Park, to help attract tourism.[10] The core shopping area has now largely relocated from the town centre to the Trostre/Pemberton area.

Llanelli has a brewing tradition, with the Felinfoel Brewery in Felinfoel, located just outside the town.[11]

The Reverend James Buckley was an ordained Methodist minister, born in Oldham, Lancashire in 1770. After moving to Llanelli towards the end of the 18th century, he became involved in the establishment of a small brewery in the town. After the death of the owner, the Rev. Buckley came into the possession of the brewery and changed its name to Buckley's Brewery. In 1998, the brewery was purchased by Brains Brewery, and production was transferred to their brewery in Cardiff. However, Brains continue to produce The Reverend James, a bitter named in memory of the Reverend.[12] The brewery has now been partly demolished.

Over the past decade, the emphasis on heavy industry that once played an important part in the district has changed to an emphasis on creating tertiary sector employment in leisure and tourism. Llanelli is now being developed as a leisure and tourism destination, with many ongoing developments such as the new Llanelli Scarlets rugby stadium, the Old Castle Works leisure village (see below) and a National Hunt racecourse at Ffos Las near Trimsaran[13] 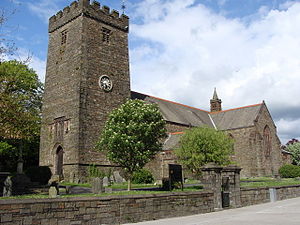 From the early 19th to the late 20th century, Llanelli was a major centre of Welsh nonconformism and there were many notable chapels in the town. Several of these have now closed and others are in serious decline. Their history was chronicled in a volume by BBC journalist Huw Edwards.[15]

Of these chapels several are significant, including Capel Als, where David Rees was a minister for many years in the 19th century. 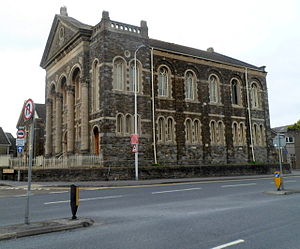 The Tabernacle Chapel, built in 1872–73, by John Humphreys of Morriston, is situated at corner of Town Hall Square, overlooking Town Hall. The site is bordered by Coleshill Terrace, Church Street and Coldstream Street. It is built of brown snecked rubble stone with extensive Bath stone dressings and a slate roof. A prominent feature is the four-pillared Corinthian arcade at the entrance. It was Grade II* listed in December 1992.[16] It is used as a venue by the Llanelli Choral Society.[17][18] 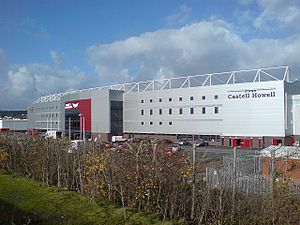 Previously, the two teams had played at Stradey Park, home to Llanelli RFC for over 130 years. It was one of the stadiums used during the 1999 Rugby World Cup, hosting the Argentina v Western Samoa game on 10 October. Stradey Park is now being re-developed.

The Welsh folk song Sosban Fach ("Little Saucepan") is mostly associated with Llanelli RFC. Many rugby clubs have notable scalps collected from touring international sides, but on 31 October 1972, Llanelli claimed perhaps the greatest by beating the New Zealand All Blacks. The Scarlets side emerged 9–3[19] winners at Stradey Park.

There is also a strong junior rugby core in Llanelli, including club sides such as Felinfoel, New Dock Stars, Furnace and the Llanelli Wanderers. In 2005, Coedcae School won the Inter-Schools Cup of Wales with an 8–5 victory over Brynteg Comprehensive.

Llanelli's rugby league club are called the West Wales Sharks and play in the Welsh Conference Premier. The Sharks play out of Llanelli Wanderers RFC's home ground of Stradey Park.

Llanelli hosts the annual Llanelli Open Bowls Tournaments, the oldest and most prestigious of which, the Roberts-Rolfe Open Singles event, has been run since 1926, and now has a first prize of £600. These are held from July to September in Parc Howard.

The Llanelli area has two golf courses, including the Machynys Peninsula Golf & Country Club which hosted the Wales Ladies Championship of Europe from 2005 until 2008; and Glyn Abbey Golf Club which was named Welsh Golf Club of the Year 2009.

Llanelli is the birthplace and home of Terry Griffiths OBE, snooker world champion in 1979 and runner up in 1988. Now a coach and snooker commentator, he runs The Terry Griffiths Matchroom in the town centre.

Coverage of local affairs is found in two local newspapers, the Llanelli Star (founded in 1909) and Llanelli Herald (launched in 2015),[21] various online community news outlets such as Your Llanelli and a local radio station, Scarlet FM. Other stations that cover the area are 96.4 The Wave, Swansea Sound and Scarlet FM's sister station Radio Carmarthenshire, and Radio BGM which serves the Prince Philip Hospital and the local community via its online service[22] 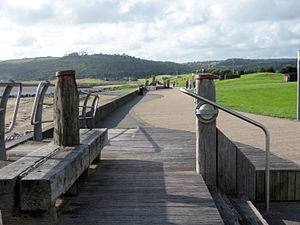 Some local attractions include:

The Ffwrnes Theatre opened in late 2012, replacing the former Theatr Elli which was part of the Llanelli Entertainment Centre.[25][26] A multi-screen cinema opened in October 2012. Millions of pounds are also being spent on regenerating the town centre shopping district.[27]

Throughout the year, there are many festivals, carnivals and events held in or near Llanelli. They include:

Llanelli is on the south coast of West Wales and is linked to many national locations via road, rail and air services. The town is linked to the M4 motorway via the A4138 and to Swansea via the Loughor bridge on the A484. Llanelli is served by regular local bus services between Swansea and Carmarthen and National Express coaches between many major UK destinations.

Rail provides an important link to the town from Llanelli railway station which is located at Great Western Crescent south of the town centre. The station is connected to Fishguard and Swansea along the West Wales Line and is the terminus of the Heart of Wales Line, which connects the town to Mid Wales and Craven Arms, and then Shrewsbury via the Welsh Marches Line. There are twice daily train services connecting the town with London Paddington and regular services to Cardiff Central, and Manchester Piccadilly. The district of Llanelli is also served by four local railway stations at Bynea, Llangennech, Pembrey &Burry Port and Kidwelly.

The nearest passenger airport is Cardiff International Airport (50 miles) although there is an airfield at Pembrey.

The first Welsh-medium primary school, Ysgol Dewi Sant, was established in Llanelli in 1947. However, the majority of children in Llanelli attend English-medium schools. The English medium secondary schools are St John Lloyd, Bryngwyn, Glan-y-Môr (Burry Port), and Coedcae; the only Welsh medium secondary school is Ysgol y Strade. There is a special school for children with disabilities, Ysgol Heol Goffa, and a private school, St Michael's, based in the Bryn area.

Coleg Sir Gâr (Carmarthenshire College) has its main campus at Graig near Pwll. It provides a college education for most of the town's further education students as well as a limited variety of vocational undergraduate degrees through the University of Wales. There are sixth form colleges at Ysgol Gyfun y Strade (Welsh medium) and St Michael's (English medium).

In Prince Phillip Hospital is a postgraduate centre for medical training run by Cardiff University's School of Postgraduate Medical and Dental Education.[32]

Llanelli is within the Llanelli parliamentary constituency, which is presently represented by the elected Labour party member Nia Griffith MP, and the National Assembly for Wales constituency, which is represented by Labour's Keith Davies AM. Llanelli is run on a community level by Llanelli Town Council and Llanelli Rural Council (depending on the area of town) and Carmarthenshire County Council on a local government level. Note that Llanelli Rural Council addresses some part of the town, but mainly the Llanelli Rural community. Recently, there have been many decisions made by the Carmarthenshire authorities, including the Carmarthenshire County Council and Local Health Board that have been very unpopular and damaging to the communities of Llanelli. In reaction to this, there have been calls to reinstate the local government district of Llanelli either as a county or as the City of Llanelli, making the entire area independent of Carmarthenshire.

Llanelli is twinned with:[33]

Llanelli Waterside, a joint venture between Carmarthenshire County Council and the Welsh Assembly Government, is a project that aims to drive the regeneration of the Llanelli area by transforming the waterfront into a business, leisure and residential community. Currently, there are two seafront housing developments under construction. Pentre Nicklaus Village, located on the Machynys Peninsula has been the subject of recent criticism for being above the price range of local people. Pentre Doc Y Gogledd (North Dock Village) in the historic North Dock area is currently being developed by David Mclean homes and is currently on the last phase of development.