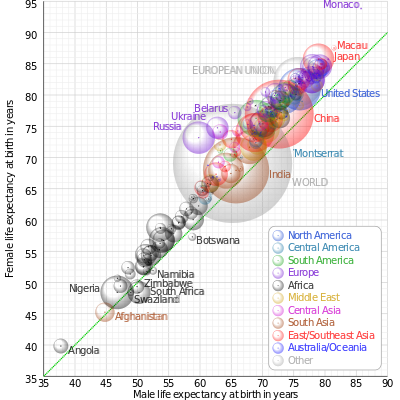 Comparison of male and female life expectancy at birth for countries and territories as defined in the 2011 CIA Factbook, with selected bubbles labelled. The green dotted line corresponds to equal female and male life expectancy. The apparent 3D volumes of the bubbles are linearly proportional to their population.[1][2]

The word "longevity" is sometimes used as a synonym for "life expectancy" in demography - however, the term "longevity" is sometimes meant to refer only to especially long-lived members of a population, whereas "life expectancy" is always defined statistically as the average number of years remaining at a given age. For example, a population's life expectancy at birth is the same as the average age at death for all people born in the same year (in the case of cohorts). Longevity is best thought of as a term for general audiences meaning 'typical length of life' and specific statistical definitions should be clarified when necessary.

Reflections on longevity have usually gone beyond acknowledging the brevity of human life and have included thinking about methods to extend life. Longevity has been a topic not only for the scientific community but also for writers of travel, science fiction, and utopian novels.

There are many difficulties in authenticating the longest human life span ever by modern verification standards, owing to inaccurate or incomplete birth statistics. Fiction, legend, and folklore have proposed or claimed life spans in the past or future vastly longer than those verified by modern standards, and longevity narratives and unverified longevity claims frequently speak of their existence in the present.

A life annuity is a form of longevity insurance.

Various factors contribute to an individual's longevity. Significant factors in life expectancy include gender, genetics, access to health care, hygiene, diet and nutrition, exercise, lifestyle, and crime rates. Below is a list of life expectancies in different types of countries:[3]

Population longevities are increasing as life expectancies around the world grow:[1][4] 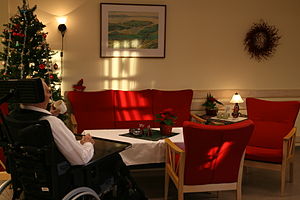 Old man at a nursing home in Norway.

Evidence-based studies indicate that longevity is based on two major factors, genetics and lifestyle choices.[5]

Twin studies have estimated that approximately 20-30% the variation in human lifespan can be related to genetics, with the rest due to individual behaviors and environmental factors which can be modified.[6] Although over 200 gene variants have been associated with longevity according to a US-Belgian-UK research database of human genetic variants,[7] these explain only a small fraction of the heritability.[8] A 2012 study found that even modest amounts of leisure time physical exercise can extend life expectancy by as much as 4.5 years.[9]

A study of the regions of the world known as blue zones, where people commonly live active lives past 100 years of age, speculated that longevity is related to a healthy social and family life, not smoking, eating a plant-based diet, frequent consumption of legumes and nuts, and engaging in regular physical activity.[10] In a cohort study, the combination of a plant based diet, normal BMI, consuming alcohol once per week to cleanse the system, and not smoking accounted for differences up to 15 years in life expectancy.[11] Korean court records going back to 1392 indicate that the average lifespan of eunuchs was 70.0 ± 1.76 years, which was 14.4–19.1 years longer than the lifespan of non-castrated men of similar socio-economic status.[12] The Alameda County Study hypothesized three additional lifestyle characteristics that promote longevity: limiting alcohol consumption, sleeping 7 to 8 hours per night, and not snacking (eating between meals), although the study found the association between these characteristics and mortality is "weak at best".[13] There are however many other possible factors potentially affecting longevity, including the impact of high peer competition, which is typically experienced in large cities.[14]

In preindustrial times, deaths at young and middle age were more common than they are today, and lifespans past 70 years were comparatively rare. This is not due to genetics, but because of environmental factors such as disease, accidents, and malnutrition, especially since the former were not generally treatable with pre-20th century medicine. Deaths from childbirth were common in women, and many children did not live past infancy. In addition, most people who did attain old age were likely to die quickly from the above-mentioned untreatable health problems. Despite this, we do find many examples of pre-20th century individuals attaining lifespans of 75 years or greater, including Benjamin Franklin, Thomas Jefferson, John Adams, Cato the Elder, Thomas Hobbes, Eric of Pomerania, Christopher Polhem, and Michelangelo. This was also true for poorer people like peasants or laborers. Genealogists will almost certainly find ancestors living to their 70s, 80s and even 90s several hundred years ago.

For example, an 1871 census in the UK (the first of its kind, but personal data from other censuses dates back to 1841 and numerical data back to 1801) found the average male life expectancy as being 44, but if infant mortality is subtracted, males who lived to adulthood averaged 75 years. The present male life expectancy in the UK is 77 years for males and 81 for females, while the United States averages 74 for males and 80 for females.

Studies have shown that black American males have the shortest lifespans of any group of people in the US, averaging only 69 years (Asian-American females average the longest).[15] This reflects overall poorer health and greater prevalence of heart disease, obesity, diabetes, and cancer among black American men.

Women normally outlive men, and this was as true in pre-industrial times as today. Theories for this include smaller bodies (and thus less stress on the heart), a stronger immune system (since testosterone acts as an immunosuppressant), and less tendency to engage in physically dangerous activities.

There is a current debate as to whether or not the pursuit of longevity is a worthwhile health care goal for the United States. Bioethicist Ezekiel Emanuel, who is also one of the architects of ObamaCare has stated that the pursuit of longevity via the compression of morbidity explanation is a "fantasy" and that life is not worth living after age 75; therefore longevity should not be a goal of health care policy.[16] This has been refuted by neurosurgeon Miguel Faria, who states that life can be worthwhile in healthy old age; that the compression of morbidity is a real phenomenon; that longevity should be pursued in association with quality of life.[17] Faria has discussed how longevity in association with leading healthy lifestyles can lead to the postponement of senescence as well as happiness and wisdom in old age.[18]

Longevity traditions are traditions about long-lived people (generally supercentenarians), and practices that have been believed to confer longevity.[22][23] A comparison and contrast of "longevity in antiquity" (such as the Sumerian King List, the genealogies of Genesis, and the Persian Shahnameh) with "longevity in historical times" (common-era cases through twentieth-century news reports) is elaborated in detail in Lucian Boia's 2004 book Forever Young: A Cultural History of Longevity from Antiquity to the Present and other sources.[24]

The Fountain of Youth reputedly restores the youth of anyone who drinks of its waters. The New Testament, following older Jewish tradition, attributes healing to the Pool of Bethesda when the waters are "stirred" by an angel.[25] After the death of Juan Ponce de León, Gonzalo Fernández de Oviedo y Valdés wrote in Historia General y Natural de las Indias (1535) that Ponce de León was looking for the waters of Bimini to cure his aging.[26] Traditions that have been believed to confer greater human longevity also include alchemy,[27] such as that attributed to Nicolas Flamel. In the modern era, the Okinawa diet has some reputation of linkage to exceptionally high ages.[28]

More recent longevity claims are subcategorized by many editions of Guinness World Records into four groups: "In late life, very old people often tend to advance their ages at the rate of about 17 years per decade .... Several celebrated super-centenarians (over 110 years) are believed to have been double lives (father and son, relations with the same names or successive bearers of a title) .... A number of instances have been commercially sponsored, while a fourth category of recent claims are those made for political ends ...."[29] The estimate of 17 years per decade was corroborated by the 1901 and 1911 British censuses.[29] Mazess and Forman also discovered in 1978 that inhabitants of Vilcabamba, Ecuador, claimed excessive longevity by using their fathers' and grandfathers' baptismal entries.[29][30] Time magazine considered that, by the Soviet Union, longevity had been elevated to a state-supported "Methuselah cult".[31] Robert Ripley regularly reported supercentenarian claims in Ripley's Believe It or Not!, usually citing his own reputation as a fact-checker to claim reliability.[32]

The U.S. Census Bureau view on the future of longevity is that life expectancy in the United States will be in the mid-80s by 2050 (up from 77.85 in 2006) and will top out eventually in the low 90s, barring major scientific advances that can change the rate of human aging itself, as opposed to merely treating the effects of aging as is done today. The Census Bureau also predicted that the United States would have 5.3 million people aged over 100 in 2100. The United Nations has also made projections far out into the future, up to 2300, at which point it projects that life expectancies in most developed countries will be between 100 and 106 years and still rising, though more and more slowly than before. These projections also suggest that life expectancies in poor countries will still be less than those in rich countries in 2300, in some cases by as much as 20 years. The UN itself mentioned that gaps in life expectancy so far in the future may well not exist, especially since the exchange of technology between rich and poor countries and the industrialization and development of poor countries may cause their life expectancies to converge fully with those of rich countries long before that point, similarly to the way life expectancies between rich and poor countries have already been converging over the last 60 years as better medicine, technology, and living conditions became accessible to many people in poor countries. The UN has warned that these projections are uncertain, and cautions that any change or advancement in medical technology could invalidate such projections.[33]

Recent increases in the rates of lifestyle diseases, such as obesity, diabetes, hypertension, and heart disease, may eventually slow or reverse this trend toward increasing life expectancy in the developed world, but have not yet done so. The average age of the US population is getting higher[34] and these diseases show up in older people.[35]

However, since 1840, record life expectancy has risen linearly for men and women, albeit more slowly for men. For women the increase has been almost three months per year. In light of steady increase, without any sign of limitation, the suggestion that life expectancy will top out must be treated with caution. Scientists Oeppen and Vaupel observe that experts who assert that "life expectancy is approaching a ceiling ... have repeatedly been proven wrong." It is thought that life expectancy for women has increased more dramatically owing to the considerable advances in medicine related to childbirth.[39]

Mice have been genetically engineered to live twice as long as ordinary mice. Drugs such as deprenyl are a part of the prescribing pharmacopia of veterinarians specifically to increase mammal lifespan. A large plurality of research chemicals have been described at the scientific literature that increase the lifespan of a number of species.

Some argue that molecular nanotechnology will greatly extend human life spans. If the rate of increase of life span can be raised with these technologies to a level of twelve months increase per year, this is defined as effective biological immortality and is the goal of radical life extension.

Certain exotic organisms do not seem to be subject to aging and can live indefinitely. Examples include Tardigrades and Hydras. That is not to say that these organisms cannot die, merely that they only die as a result of disease or injury rather than age-related deterioration (and that they are not subject to the Hayflick limit).