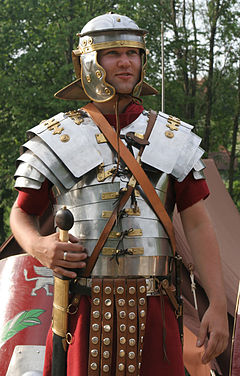 A reenactor dressed as a Roman soldier in lorica segmentata

The lorica segmentata (segmented cuirass) is a type of personal armour used by soldiers of the Roman Empire, consisting of metal strips ("girth hoops" fashioned into circular bands), fastened to internal leather straps. The Latin name was first used in the 16th century; the ancient form is unknown, although it is possible that the Romans referred to the armour as "lorica laminata" (laminated cuirass).[citation needed]

The plates of lorica segmentata armour were soft iron inside and (some at least) were mild steel on the outside, making the plates hardened against damage without becoming brittle.[1] This was a deliberate act, called case hardening, and is carried out by enriching the surface iron with carbon from organic materials packed tightly around the piece which is then heated in a forge.[2] The strips were arranged horizontally on the body, overlapping downwards, and they surrounded the torso in two halves, being fastened at the front and back. The upper body and shoulders were protected by additional strips ("shoulder guards") and breast- and backplates. The form of the armour allowed it to be stored very compactly, since it was possible to separate it into four sections each of which would collapse on itself into a compact mass. The fitments that closed the various plate sections together (buckles, lobate hinges, hinged straps, tie-hooks, tie-rings, etc.) were made of brass. In later variants dating from around 75–80 A.D., the fastenings of the armour were simplified. Bronze hinges were removed in favour of simple rivets, belt fastenings utilised small hooks, and the lowest two girdle plates were replaced by one broad plate.

During the time of their use, this style of armour evolved and changed, the currently recognised types being the Kalkriese, Corbridge and Newstead types, named after their places of discovery. There was, however, a considerable overlap between these types in use and the Corbridge and Newstead types are often found at the same site (e.g. at Caerleon in Wales, Carnuntum in Austria, Carlisle in England and León in Spain). It is possible that there was a fourth type, covering the body with segmented armour joined to scale shoulder defences. However, this is only known from one badly damaged statue originating at Alba Iulia in Romania. The currently accepted range for the use of the armour is from about 9 B.C. (Dangstetten) to the late 3rd century A.D. (León). Its use was geographically widespread, but mail may have been more common at all times.

The question as to precisely who used the armour is debated. There is a clear difference in armour between the two corps shown on Trajan's Column. This is a monument erected in 113 in Rome to commemorate the conquest of Dacia by Emperor Trajan (ruled 98–117): its bas-reliefs are a key source for Roman military equipment. Auxilia are generally shown wearing mail (lorica hamata) cuirasses and carrying oval shields. Legionaries are uniformly depicted wearing the lorica segmentata and carrying the curved rectangular shield.[3] On this basis, it has been supposed that lorica segmentata was used by legionaries only.[citation needed] However, some historians consider Trajan's Column to be inaccurate as a historical source due to its inaccurate and stylised portrayal of Roman armour: "it is probably safest to interpret the Column reliefs as ‘impressions’, rather than accurate representations." [4]

The view that auxilia were light troops originates from Vegetius' comment that "auxilia are always joined as light troops with the legions in the line".[5] It is true that some specialist units in the auxilia, such as Syrian archers and Numidian cavalry wore light armour (or none). But they were a small minority of the auxilia. Most auxiliary cohortes contained heavy infantry similar to legionaries.[6]

However, on another Trajanic monument (the Adamclisi Tropaeum) the lorica segmentata does not appear at all, and legionaries and auxilia alike are depicted wearing either mail or scales (lorica squamata). Some experts are of the opinion that the Adamclisi monument is a more accurate portrayal of the situation,[7] the segmentata used rarely, maybe only for set-piece battles and parades. This viewpoint considers the figures in Trajan's Column to be highly stereotyped, in order to distinguish clearly between different types of troops.[8] In any event, both corps were equipped with the same weapons: gladius (a close-combat stabbing sword) and javelins, although the type of javelin known as pilum seems to have been provided to legionaries only.[9] Goldsworthy points out that the equipment of both corps were roughly equal in weight.[6]

In recent years archaeologists have found fittings of loricae segmentatae in many fort sites that are thought to have been garrisoned by only auxiliary troops, i.e., where the legions were not based. If the legions were, indeed, broken up and distributed around all these small bases, then it implies a tactical use of the legions that has not previously been considered. Hitherto, the legions were regarded as shock troops employed only en masse and not broken up into detachments. M.C. Bishop, however, has argued that we need to examine the way in which the various troop types were armed and deduce from this what their battle roles were, rather than trying to consider who-wore-what. Succinctly put, the legions were armed and trained for close-order combat while the auxiliary forces, just as numerous, were more accustomed to open order fighting, although they could be employed as the legions were (e.g. at Mons Graupius) if circumstances demanded this.[10]

During the 3rd century, all peregrini were granted Roman citizenship, and therefore legionaries lost their social superiority.[11] The lorica segmentata eventually disappeared from Roman use, most likely due to its high cost and difficult maintenance despite its good qualities, although it appears to have still been in use into the early 4th century, being depicted in the Arch of Constantine erected in 315 during the reign of Constantine I to commemorate his military achievements.[1] (However, it has been argued that these depictions are from an earlier monument by Marcus Aurelius, from which Constantine incorporated portions into his Arch.)[12] Recently there has been evidence of a lorica segmentata found in Spain, dating from the third century.[2] What is more surprising is that it was found in an area where, as far as we know, only limitanei operated. (Limitanei are frontier troops, from Latin limes, boundary or frontier, while the mobile field armies are the comitatenses; it used to be thought they were inferior second-line units or militia; their quality did not diminish until the mid-5th century.)

The Lorica Segmentata has come to be viewed as a symbol of the Roman legions in popular culture. This tendency even extends to time periods where its employment is so early or late as to be anachronistic.