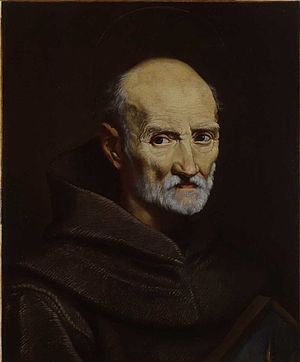 Wadding was born in 16 October 1588 at Waterford to Walter Wadding of Waterford, a wealthy merchant,[1] and his wife, Anastasia Lombard (sister of Peter Lombard, Archbishop of Armagh and Primate of Ireland).[1] Educated at the school of Mrs. Jane Barden in Waterford and of Peter White in Kilkenny, in 1604 he went to study in Lisbon and at the University of Coimbra.[2]

After completing his university studies, Wadding became a Franciscan friar in 1607, and spent his novitiate at Matosinhos, Portugal. He was ordained priest in 1613 by João Manuel, Bishop of Viseu, and in 1617 he was made President of the Irish College at the University of Salamanca, and Master of Students and Professor of Divinity.[1] The next year, he went to Rome as chaplain to the Spanish ambassador to the Papal States, Bishop Antonio Trejo de Sande, O.F.M. Wadding collected the funds for the establishment of the College of St. Isidore in Rome, for the education of Irish priests, opened 24 June 1625, with four lecturers — Anthony O'Hicidh of a famous literary family in Thomond, Martin Breathnach from Donegal, Patrick Fleming from Louth, and John Punch from Cork. He gave the college a library of 5,000 printed books and 800 manuscripts, and thirty resident students soon came. Wadding served as rector of the college for 15 years. From 1630 to 1634, he was Procurator of the Order of Friars Minor at their headquarters in Rome, and Vice Commissary from 1645 to 1648.

Wadding was an enthusiastic supporter of the Irish Catholics during the Irish Confederate Wars, and his college became the strongest advocate of the Irish cause in Rome. (This spirit of patriotism originated by Wadding had a lasting impact, so that the 19th-century Catholic Archbishop George Errington, who was sent by Gladstone[who?] to explain the relation of English and Irish politics in Rome, reported that those Irish politicians thought most extreme in England were conservatives compared with the collegians of St. Isidore.)[citation needed] Wadding sent officers and arms to Ireland, and induced Pope Innocent X to send there Giovanni Battista Rinuccini.[citation needed]

The confederate Catholics petitioned Pope Urban VIII to make Wadding a cardinal, but he found ways to intercept the petition, and it remained in the archives of the college.[3]

Wadding died on 18 November 1657, and is buried in the church of the College of San Isidore, in Rome. His life was written by Francis Harold, his nephew. The learned Franciscan friar Bonaventura Baron was another nephew.

Wadding founded the Pontifical Irish College for Irish secular clergy. In 1900, Wadding's portrait and part of his library were in the Franciscan friary on Merchant's Quay, Dublin. Through Wadding's efforts, St Patrick's Day became a feast day.[2]

In the 1950s, a statue of Wadding was erected on the Mall in Waterford, adjacent to Reginald's Tower and one of the city's most prominent locations. The Waterford-born Franciscan's literary, academic and theological attributes were denoted by a quill pen held poised in the statue's right hand. More recently this statue was replaced by one of Thomas Francis Meagher. The figure of Luke Wadding was moved to a position at the entrance to the French Church, Waterford on Greyfriars.

In 2000, the Waterford Institute of Technology dedicated a new library building to his name. [4]

A voluminous writer, his chief work was the Annales Minorum in 8 folio volumes (1625–1654), re-edited in the 18th century and continued up to the year 1622; it is the classical work on Franciscan history. He published also a Bibliotheca of Franciscan writers, an edition of the works of Duns Scotus, and the first collection of the writings of St Francis of Assisi. [3]

Wadding published a total of 36 volumes – fourteen at Rome, twenty-one at Lyon, and one at Antwerp.

his essay is prefixed to the concordance of the Hebrew scriptures of Marius de Collasio, which Wadding prepared for the press in 1621.[3]