From Infogalactic: the planetary knowledge core
Jump to: navigation, search
This article is about the city in Germany. For other meanings, see Marburg (disambiguation).

Marburg is a university town in the German federal state (Bundesland) of Hessen, capital of the Marburg-Biedenkopf district (Landkreis). The town area spreads along the valley of the river Lahn and has a population of approximately 72,000.

Having been awarded town privileges in 1222, Marburg served as capital of the landgraviate of Hessen-Marburg during periods of the 15th to 17th centuries. The University of Marburg was founded in 1527 and dominates the public life in the town to this day.

Like many settlements, Marburg developed at the crossroads of two important early medieval highways: the trade route linking Cologne and Prague and the trade route from the North Sea to the Alps and on to Italy, the former crossing the river Lahn here. The settlement was protected and customs were raised by a small castle built during the 9th or 10th century by the Giso. Marburg has been a town since 1140, as proven by coins. From the Gisos, it fell around that time to the Landgraves of Thuringia, residing on the Wartburg above Eisenach.

In 1228, the widowed princess-landgravine of Thuringia, Elizabeth of Hungary, chose Marburg as her dowager seat, as she did not get along well with her brother-in-law, the new landgrave. The countess dedicated her life to the sick and would become after her early death in 1231, aged 24, one of the most prominent female saints of the era. She was canonized in 1235. 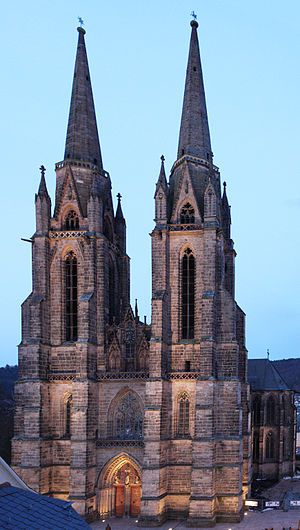 In 1264, St Elizabeth's daughter Sophie of Brabant, succeeded in winning the Landgraviate of Hessen, hitherto connected to Thuringia, for her son Henry. Marburg (alongside Kassel) was one of the capitals of Hessen from that time until about 1540. Following the first division of the landgraviate, it was the capital of Hessen-Marburg from 1485 to 1500 and again between 1567 and 1605. Hessen was one of the more powerful second-tier principalities in Germany. Its "old enemy" was the Archbishopric of Mainz, one of the prince-electors, who competed with Hessen in many wars and conflicts for coveted territory, stretching over several centuries.

After 1605, Marburg became just another provincial town, known mostly for the University of Marburg. It became a virtual backwater for two centuries after the Thirty Years' War (1618–48), when it was fought over by Hessen-Darmstadt and Hesse-Kassel. The Hessian territory around Marburg lost more than two-thirds of its population, which was more than in any later wars (including World War I and World War II) combined.

Marburg is the seat of the oldest Protestant-founded university in the world, the University of Marburg (Philipps-Universität-Marburg), founded in 1527. It is one of the smaller "university towns" in Germany: Greifswald, Erlangen, Jena, and Tübingen, as well as the city of Gießen, which is located 30 km south of Marburg.

In 1529, Philipp I of Hesse arranged the Marburg Colloquy, to propitiate Martin Luther and Huldrych Zwingli. 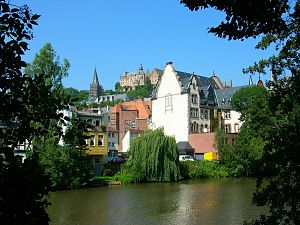 Marburg on the Lahn

Owing to its neglect during the entire 18th century Marburg – like Rye or Chartres – survived as a relatively intact Gothic town, simply because there was no money spent on any new architecture or expansion. When Romanticism became the dominant cultural and artistic paradigm in Germany, Marburg became interesting once again, and many of the leaders of the movement lived, taught, or studied in Marburg. They formed a circle of friends that was of great importance, especially in literature, philology, folklore, and law. The group included Friedrich Karl von Savigny, the most important jurist of his day and father of the Roman Law adaptation in Germany; the poets, writers, and social activists Achim von Arnim, Clemens Brentano, and especially the latter's sister and the former's later wife, Bettina von Arnim. Most famous internationally, however, were the Brothers Grimm, who collected many of their fairy tales here. The original building inspiring his drawing Rapunzel's Tower stands in Amönau near Marburg. Across the Lahn hills, in the area called Schwalm, little girls' costumes included a red hood.

In the Austro-Prussian War of 1866, the Prince-elector of Hessen had backed Austria. Prussia won and took the opportunity to invade and annex the Electorate of Hessen (as well as Hanover, the city of Frankfurt, and other territories) north of the Main River. However, the pro-Austrian Hesse-Darmstadt remained independent. For Marburg, this turn of events was very positive, because Prussia decided to make Marburg its main administrative centre in this part of the new province Hessen-Nassau and to turn the University of Marburg into the regional academic centre. Thus, Marburg's rise as an administrative and university city began. As the Prussian university system was one of the best in the world at the time, Marburg attracted many respected scholars. However, there was hardly any industry to speak of, so students, professors, and civil servants – who generally had enough but not much money and paid very little in taxes – dominated the town, which tended to be very conservative. 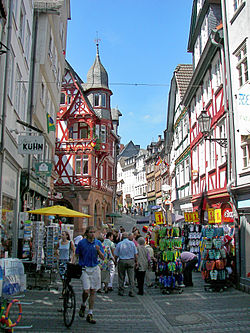 The Wettergasse in the Old City

Franz von Papen, vice-chancellor of Germany in 1934, delivered an anti-Nazi speech at the University of Marburg on 17 June.

From 1942 to 1945, the whole city of Marburg was turned into a hospital with schools and government buildings turned into wards to augment the existing hospitals. By the spring of 1945, there were over 20,000 patients – mostly wounded German soldiers. As a result of its being designated a hospital city, there was not much damage from bombings except along the railroad tracks.

In 1945, Marburg became President and Field Marshal Paul von Hindenburg's final resting place. His grave is in the Elisabethkirche. He is also an honorary citizen of the town.

As a larger mid-sized city, Marburg, like six other such cities in Hessen, has a special status as compared to the other municipalities in the district. This means that the city takes on tasks more usually performed by the district so that in many ways it is comparable to an urban district (kreisfreie Stadt).

The mayor of Marburg, Egon Vaupel, directly elected in January 2005 and in office since 1 July 2005, is from the Social Democratic Party of Germany. His deputy, the head of the building and youth departments, Dr. Franz Kahle, is from Alliance '90/The Greens. The majority in the 59-seat city parliament is held by a coalition of SPD (22 seats) and Green (13 seats) members. Also represented are the factions of the Chrisitan Democratic Union (14 seats), The Left (4 seats), the Free Democratic Party (2 seats), a CDU splinter group MBL (Marburger Bürgerliste – 2 seats), the BfM (Bürger für Marburg – 1 seat) and the Pirate Party (1 seat).

Among the left wing groups are ATTAC, the Worldshop movement, an autonomist-anarchist scene, and a few groups engaged in ecological or human-rights concerns.

The city of Marburg, similar to the cities of Heidelberg, Tübingen and Göttingen, has a rich history of student fraternities or Verbindungen of various sorts, including Corps, Landsmannschaften, Burschenschaften, Turnerschaften, etc.

Marburg has the following sister cities:[2]

Marburg's coat of arms shows a Hessian landgrave riding a white horse with a flag and a shield on a red background. The shield shows the red-and-white-striped Hessian lion, also to be seen on Hessen's state arms, and the flag shows a stylized M, blue on gold (or yellow). The arms are also the source of the city flag's colors. The flag has three horizontal stripes colored, from top to bottom, red (from the background), white (from the horse) and blue (from the shield).

The coat of arms, which was designed in the late nineteenth century, is based on a landgrave's seal on a municipal document. It is an example of a very prevalent practice of replacing forgotten coats of arms, or ones deemed not to be representative enough, with motifs taken from seals.

The city's name is also connected to a filovirus, the Marburg virus, which was first noticed and described during an outbreak in the city. Workers were accidentally exposed to infected Green Monkey tissue at the city's former industrial plant (1967), the Behring-Werke, then part of Hoechst and today of CSL Behring, founded by Marburg citizen and first Nobel Prize in Medicine winner, Emil Adolf von Behring. During the outbreak, 31 people became infected and seven of them died. "Marburg virus" is named after the city per the custom of naming viruses after the location of their first recorded outbreak.

Many homes have solar panels and in 2008 a law was passed to make the installation of solar systems on new buildings or as part of renovation projects mandatory. 20 percent of heating system requirements ought to have been covered by solar energy in new buildings. Anyone who fails to install solar panels would have been fined €1,000. The new law, approved on 20 June 2008, should have taken effect in October 2008.[3] However, this law was stopped by the Regierungspräsidium Giessen in September 2008.[4]

Main sights and points of interest

Marburg remains a relatively unspoilt, spire-dominated, castle-crowned Gothic/Renaissance city on a hill partly because it was isolated between 1600 and 1850. Architecturally, it is famous both for its castle Marburger Schloss and its medieval churches. The Elisabethkirche, as one of the two or three first purely Gothic churches north of the Alps outside France, is an archetype of Gothic architecture in Germany.

Much of the physical attractiveness of Marburg is due to Hanno Drechsler who was Lord Mayor between 1970 and 1992. He promoted urban renewal, the restoration of the Oberstadt (uptown), and he established one of the first pedestrian zones in Germany. Marburg's Altstadtsanierung (since 1972) has received many awards and prizes.[citation needed]

The Marktplatz is the heart of Marburg's old town. In the center is a fountain dedicated to St. Georg, a popular meeting place for students. To the south is the old town hall and the path leading north winds its way up to the palace overlooking the town.

Cargo ship Marburg on the Schelde in 1966

In June 1958, the city of Marburg took over the partnership of the German general cargo ship Marburg of the Hamburg-American Packet Transit Actien-Gesellschaft (Hapag).